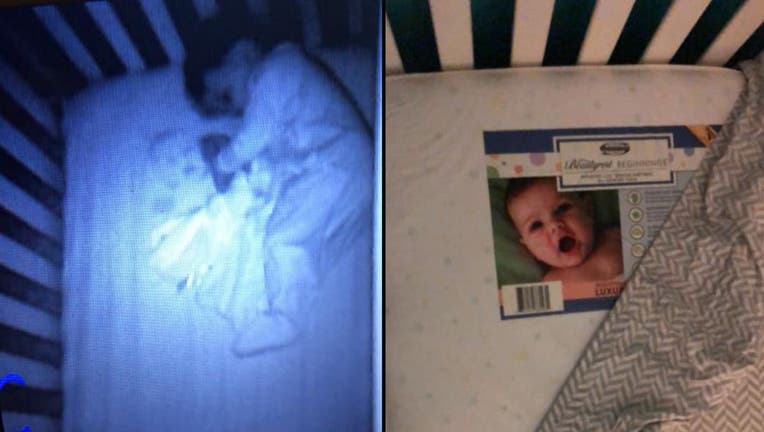 Halloween came early to an Illinois mom of two after her husband forgot an important step while making their son’s bed.

Maritza Cibuls, 32, was getting ready for bed after putting her 18-month-old baby boy to sleep in his crib. However, when she went to check the baby monitor, she was so frightened by what she saw that she “barely" got any shut-eye: On the video monitor's display, Cibuls saw what she thought was a “ghost baby” snuggled up next to her son in bed.

Cibuls took a picture of the monitor and said at first she thought her eyes were playing tricks on her and “tried to ignore it” before getting “so freaking out” she couldn’t sleep.

In a Facebook post, where Cibuls shared an image of the spooky sighting, she wrote that she tried “creeping in[to her son’s room] with a flashlight” to check out what was staring back at her on the video monitor.

RELATED: Driver miraculously survives after his vehicle is impaled by logs from truck

“I didn’t see anything unusual in the crib at all. I was trying to feel around to see if there was any wetness – we thought there might be some drool on the sheet – but I didn’t feel any,” she told Yahoo Lifestyle UK.

“I told myself maybe it was just a stain on the sheet and left the room. I probably went in there about three more times throughout the night,” she added.

To make matters worse, Cibuls said her husband was working that night, which scared her even more, as she was alone with her children in the house.

“I kept opening my eyes to check to make sure the ‘ghost’ wasn’t moving. Then when I would start to finally relax, my son would roll over and I’d be on high alert again. Every time I checked on him, though, he seemed completely fine,” she told the outlet.

Once morning came, Cibuls went into the room to get to the bottom of the creepy apparition.

Cibuls said when she told her husband what happened “he just laughed,” noting he had changed the sheets after their son had woken up “crying and wet” and had forgotten to put the mattress protector back on.

“I could kill him,” she wrote on Facebook, along with cry-laughing emoji.

The hilarious story went viral on the social media platform, with nearly 500,000 reactions as of Monday afternoon.

Most of the 300,000 commenters added that they were laughing along with Cibuls, and admitted that they too would have found the situation creepy if they were in her place.

“That looks so creepy,” another commented.

Many others simply responded “lol.”