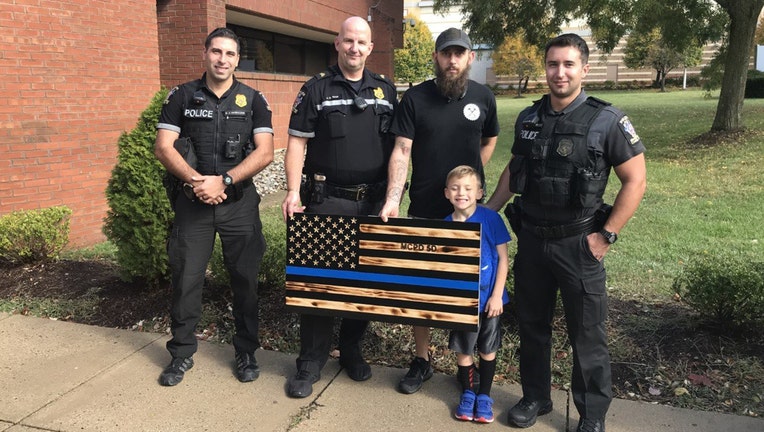 GERMANTOWN, Md. - A county executive in Maryland has banned a police station from displaying a wooden “thin blue line” flag that was a gift from a local resident.

"The flag provides a symbol of support to some but it is a symbol of dismissiveness to others,” Montgomery County Executive Marc Elrich said in a note. “Because it is divisive, the flag will not be posted at the 5th District nor in any public space within the Police Department."

The flag, a gift to the 5th District officers from Montgomery County woodworker James Shelton, is labeled by some as a "blue lives matter" flag in response to the "Black Lives Matter" movement.

A photo on the Montgomery County Police twitter page Wednesday shows Shelton and his young son presenting the artwork to three uniformed officers.

"Thank you to resident James Shelton, who presented Montgomery County 5th District officers with a wooden American Flag that he had made in recognition of National First Responders Day. The flag will be displayed in the 5th District Station."

On Friday the police department posted what it said was a note from Elrich saying otherwise.

"Acting Police Chief Marcus Jones and I understand the concerns of the community," the county executive said in the note.

He concluded by saying, “Under my administration, we are committed to improving police relations with the community and will immediately address any action that stands against our mission."