SCITUATE, Mass. - A Massachusetts man got a big surprise on Valentine’s Day, but it wasn’t a surprise in the traditional sense.

The family had been quarantined for several days after some family members contracted COVID-19 and had gotten a tad stir-crazy.

Maguire figured it’d be a nice treat to drive around in the family van to get them out of the house.

"We had the windows open, and we had the sunroof open, and it was 63 degrees here in Scituate, and it’s February, it’s amazing," Maguire told Boston 25 News. 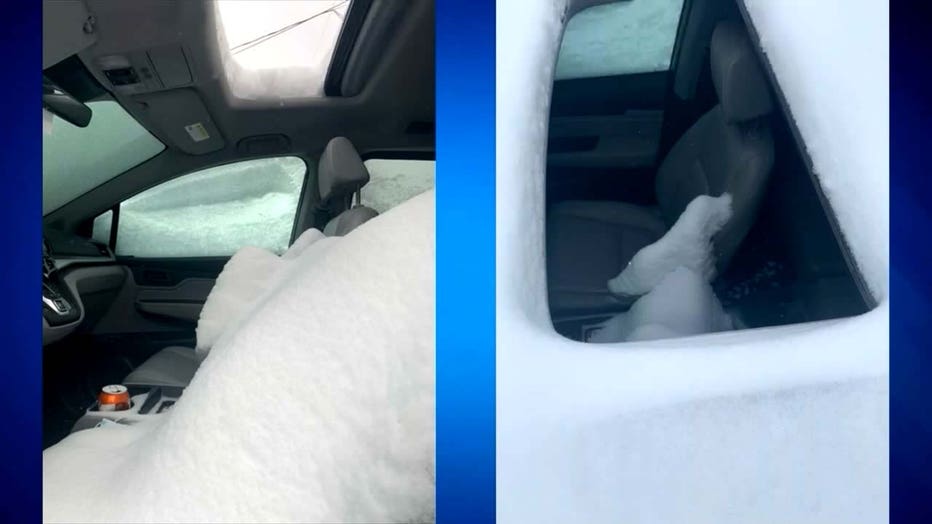 However, when they returned home from their drive, Maguire forgot to close the sunroof on Feb. 12. And unlucky for Maguire, heavy snow blanketed Massachusetts on Feb. 13 and continued to fall well into Valentine’s Day morning.

When Maguire walked out to the car to take his kids to school on Monday, there were several inches of fresh powder piled inside the van.

"When I opened the van I'm thinking it's Valentine's Day. It's my wife's car. This is not going to end well. I came in and I said, I hope you're in a good mood because I said there’s about nine inches of snow in the van," Maguire said.

Parts of Massachusetts got upwards of 10 inches of snow over the weekend according to the National Weather Service.

Fortunately, the snow was contained to the driver’s side seat and the middle console and nothing appeared to have water damage.

Surprisingly, this is not the first time this has happened, according to Maguire, except instead of snow, it rained.

"It was like the second day we had the car. I was the one that pushed for the sunroof too. So. It's not a good fit. I don't think," Maguire joked.

And in another incident when Maguire accidentally locked a squirrel in the van after leaving the door open for just a few minutes, according to Boston 25 News.

When he came back out to the car the next day, the squirrel had torn into some Goldfish Crackers and other snacks that were left inside the van.