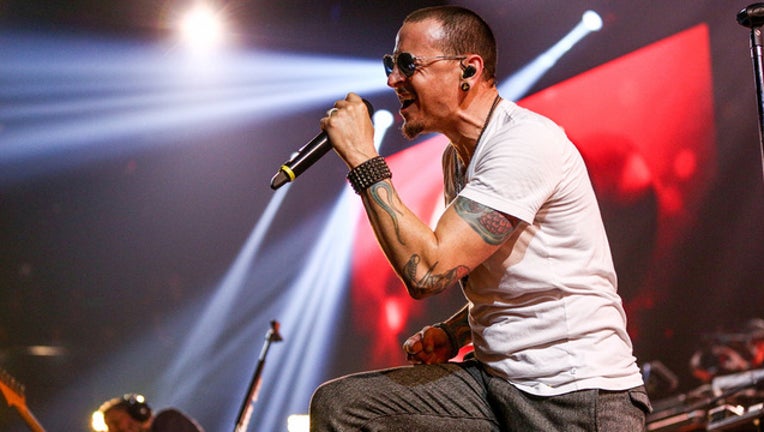 Chester Bennington of Linkin Park performs on stage at the iHeartRadio Album Release Party presented by State Farm at the iHeartRadio Theater Los Angeles on May 22, 2017 in Burbank, California (Photo by Rich Fury/Getty Images for iHeartMedia).

LOS ANGELES - Chester Bennington, the lead singer of the Grammy-Award winning band Linkin Park, has died of an apparent suicide in his Southern California home. He was 41 years old.

Bennington was found at his residence in Palos Verdes Estates in Los Angeles County early Thursday morning, according to the Los Angeles County Coroner's Office. Authorities confirmed Bennington's death was being investigated as an apparent suicide.

Bennington had six children and was married to his second wife, Talinda. The singer had struggled with drug and alcohol addiction for years.

The rock star had said in the past that he'd considered committing suicide because he had been abused as a child by an older male, according to TMZ, who first reported Bennington's death.

Linkin Park, which sold millions of albums with its blend of hard rock, hip-hop and rap, shot to stardom in the early 2000s.

Their debut album "Hybrid Theory" sold 10 million copies and their follow up album "Meteora" sold another 4 million in 2003. Both albums explored feelings of frustration and fury.

The band was on tour and had a show at New York's Citi Field scheduled for next week with Blink 182.

Linkin Park released its most recent album, "One More Light," in May. The group's new music divided critics and fans for its embrace of pop with some claiming the band had sold old, which Bennington denied.

"One More Light" became Linkin Park's fifth No. 1 album debut on the Billboard 200.

"If you like the music, fantastic. If you don't like it, that's your opinion too. Fantastic," Bennington told NME magazine. "If you're saying we're doing what we're doing for a commercial or monetary reason, trying to make success out of some formula, then stab yourself in the face!"

Bennington got his big break in 1999 when he was an assistant at a digital-services firm in Phoenix. A music executive Bennington a demo from the band Xero, who needed a lead singer. Bennington wrote and recorded new vocals over the band's playing and sent the results back.

He soon got the gig and the band then changed its name to Hybrid Theory, then Linkin Park.

If you or a loved one is feeling distressed, call the National Suicide Prevention Lifeline. The crisis center provides free and confidential emotional support 24 hours a day, 7 days a week to civilians and veterans.