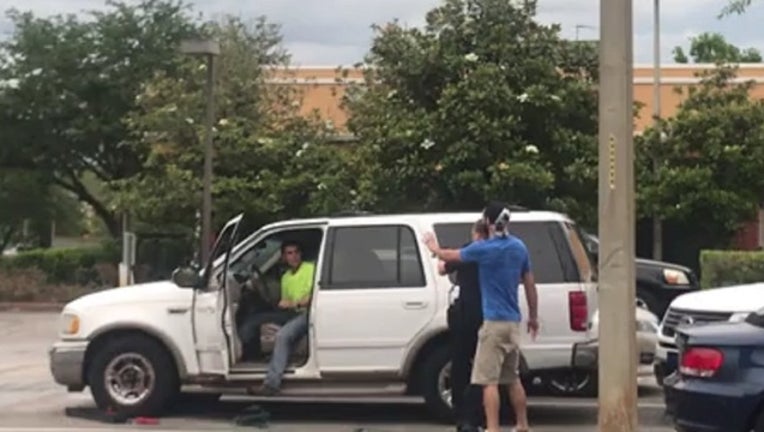 LAKE MARY, Fla. (WOFL FOX 35) - The Florida Department of Law Enforcement says three Lake Mary police officers were justified in their use of force in May, when they shot and killed a suspect in an ice cream shop parking lot.

On Friday, the state released their report clearing Sgt. William Rodwick, Officer Martin Neal and Officer Robert Ritter for their roles in the May 15 incident outside Jeremiah’s Italian Ice on Lake Mary Boulevard.

Around 7 p.m. that night, Lake Mary Police received a report of a road rage incident, in which the driver of one vehicle brandished a gun at the other driver.

The officers tracked down that driver in the Jeremiah’s lot with a flat tire.

According to the report, Rodwick, Neal and Ritter tried to get the suspect, David Romasky, 34, to exit his vehicle to speak to them.

They said he refused to comply, and eventually the officers broke the window to open the door.

FDLE included cellphone video of the incident taken by a witness in the area.

After the window is broke, the suspect, identified as Romansky, can be seen holding a gun in his hand.

The three officers then pull and point their weapons at the suspect who can clearly be seen raising his weapon at the cops.

The officers then fire multiple rounds at the suspect who falls to the ground.

Romansky died at the scene that night.

According to the report filed by the state, investigators interviewed more than three dozen eye witnesses to the incident, including Romansky’s half-brother who was at the scene at the time of the shooting.

The report said he backed the police in the incident, saying he believed his brother raised the gun expecting officers to “do what they were trained to do.”

In a letter to FDLE and the Lake Mary Police Department clearing those officers, State Attorney Phil Archer wrote: “After our review of your investigation, it is the conclusion of this office that the use of force by Sergeant Rodrwick [SIC] and Officers Ritter and Neal was lawful pursuant to Chapter 776, Florida Statutes.”

Lake Mary Police Chief Mike Biles said Friday, after reviewing the incident himself that his officers and supervisors did what they were trained to do that night and handled the situation as they should have.

“The officers were faced with a deadly force situation and they responded with one,” said Biles. “You can’t point a weapon at an officer and expect something bad not to happen.”