Hall of Fame trainer Bob Baffert speaks as Medina Spirit’s victory in the Kentucky Derby is in serious jeopardy because of a positive postrace drug test.

Kentucky Derby winner Medina Spirit was treated with an antifungal ointment containing the steroid betamethasone that may have caused the horse to fail a postrace drug test, trainer Bob Baffert said Tuesday.

In a statement issued by his lawyer, Baffert said Medina Spirit was treated for dermatitis with the ointment once a day leading up to the May 1 race and that equine pharmacology experts have told him this could explain the test results. Baffert said the horse tested positive for 21 picograms of the substance, which is typically given to horses therapeutically to help their joints and is a violation even at a trace amount on race day in Kentucky.

Regardless of the reason, Medina Spirit would be disqualified from the Derby and Mandaloun named the winner if a second round of testing shows the presence of betamethasone. Preakness officials said Medina Spirit and Baffert's other horses running at Pimlico Race Course this weekend will be allowed to enter the race, subject to additional testing and monitoring.

"My investigation is continuing, and we do not know for sure if this ointment was the cause of the test results, or if the test results are even accurate, as they have yet to be confirmed by the split sample," Baffert said. "I have been told that a finding of a small amount, such as 21 picograms, could be consistent with application of this type of ointment."

Baffert said at a news conference Sunday at Churchill Downs that he did not know how the substance made its way into the colt's system. 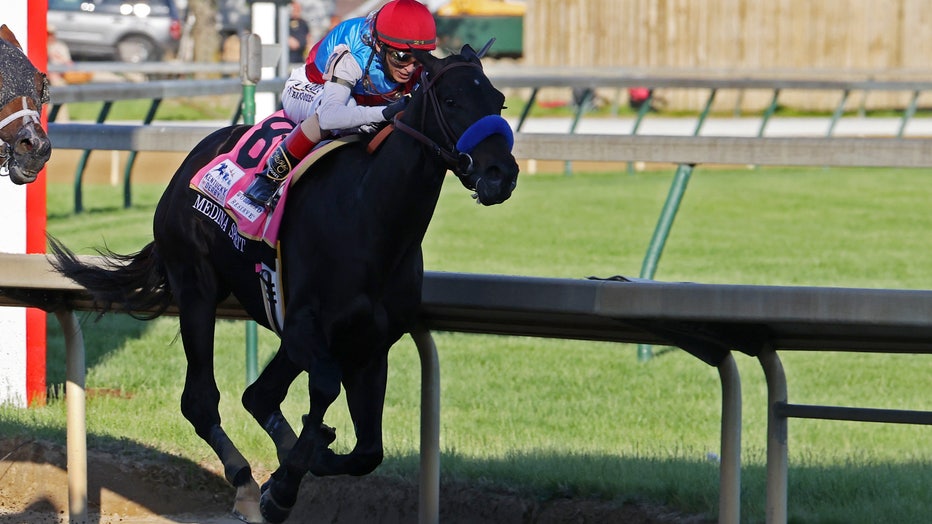 LOUISVILLE, KY - MAY 01: Medina Spirit (8) ridden by John Velasquez leads on the inside coming through the final turn and wins the 147th Running of the Kentucky Derby on May 1, 2021 at Churchill Downs in Louisville, Kentucky. (Photo by Brian Spurlock

Lawyer Craig Robertson said the plan is still for Medina Spirit to run in the Preakness on Saturday. The horse and stablemate Concert Tour arrived at Pimlico Race Course on Monday and jogged on the track Tuesday morning, though Baffert does not plan to be in Baltimore for the race and put assistant Jimmy Barnes in charge.

The Preakness post position draw for the anticipated field of 10 is scheduled for Tuesday afternoon.

Preakness officials said they were reviewing the facts before deciding on Medina Spirit's entry. Robertson told The Associated Press he planned to file a restraining order to prevent the Preakness from barring Medina Spirit if that was the decision that was made.

"Medina Spirit earned his Kentucky Derby win, and my pharmacologists have told me that 21 picograms of betamethasone would have had no effect on the outcome of the race," Baffert said. "Medina Spirit is a deserved champion, and I will continue to fight for him."

Medina Spirit's failed drug test is the fifth medication violation in the past 13 months for Baffert, a two-time Triple Crown-winning trainer and the face of the sport. Winning the Preakness with either Medina Spirit or Concert Tour would give Baffert a record eighth victory in that race, breaking a tie with 19th-century trainer R.W. Walden.

Except for 2020, when the Triple Crown races were run out of order, Baffert is undefeated with the Derby winner in the Preakness.