LOS ANGELES - Officials are warning holiday travelers to avoid using public USB charging stations at airports and other locations due to fears of a USB charger scam known as “juice jacking.”

The Los Angeles County District Attorney’s Office took to Twitter to caution anyone that may be tempted to charge their phones in public places, saying, “a free charge could end up draining your bank account.”

Sisak said that in mere minutes, your device could be locked or even taken over and used to send private and sensitive information such as bank account information and passwords right into the hands of criminals.

Sisak recommended using an AC power outlet instead of a USB charging station to avoid potential fraud. He also said that it’s wise to travel with your own portable charger along with AC and other car chargers when on the go.

It’s easy for digital thieves to steal private information from unsuspecting consumers, especially around the holidays, due to the rise in travel and visits to shopping centers during the season. 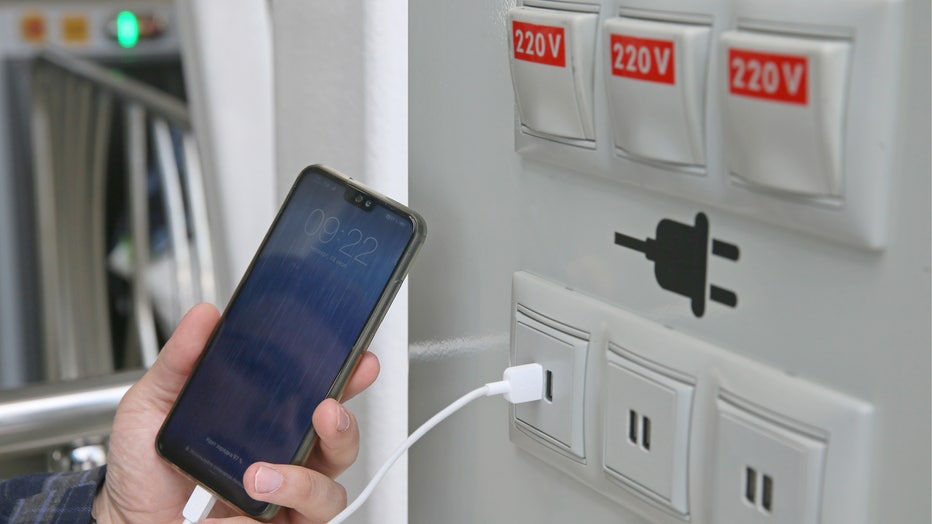 FILE - A passenger at a USB mobile phone charging point at Streshnevo Station of the Moscow Central Circle, a commuter rail line in Moscow.

A hacker that goes by the name “MG” was selling an iPhone lightning cable in August called the “O.MG Cable” for $200 that was able to take control of any Mac computer, remotely gaining access to a user’s private information.

RELATED: Be careful whose charger you borrow: Phone charging cables can hack your devices, experts say

According to the hacker’s website, once the cable is plugged into a computer or phone, it can be controlled through a wireless network that is built inside the cable.

Hardware like the “O.MG Cable,” and infected USB kiosks regularly found in most public places are making it harder for the average consumer to protect their private information.

You may be tempted to borrow an ordinary-looking charging cable or device from a stranger, but never forget the importance of protecting your tech.