Watch: Speaking at Delaware State University, Biden blasted Republicans in Congress for criticizing student loan relief when some of them have had millions of dollars in pandemic relief loans forgiven.

DOVER, Del. - President Joe Biden said Friday that nearly 22 million people have applied for federal student loan relief in the week since his administration made its online application available — more than half of the number the White House believes are eligible for the program.

Speaking at Delaware State University, a historically Black university where the majority of students receive federal Pell Grants, Biden touted the first-week statistics since the application was beta-launched last Friday. He officially unveiled it at the White House on Monday.

Biden’s plan calls for $10,000 in federal student debt cancellation for those with incomes below $125,000 a year, or households that make less than $250,000 a year. Those who received federal Pell Grants to attend college are eligible for an additional $10,000. The plan makes 20 million eligible to get their federal student debt erased entirely.

Biden highlighted the ease of the application, which doesn't require users to upload any forms or to create an account.

"Folks, it takes less than 5 minutes," Biden said. He said the "vast majority" of applicants are able to submit for relief from their phones.

Biden blasted Republicans who have criticized his relief program, saying "their outrage is wrong and it’s hypocritical." He added, "I don’t want to hear it from MAGA Republican officials" who had millions of debt and pandemic relief loans forgiven, naming GOP lawmakers like Reps. Vern Buchanan and Marjorie Taylor Greene, who received loan forgiveness, and Sen. Ted Cruz, who called some beneficiaries of student loans "slackers."

Asked Biden, "Who the hell do they think they are?" 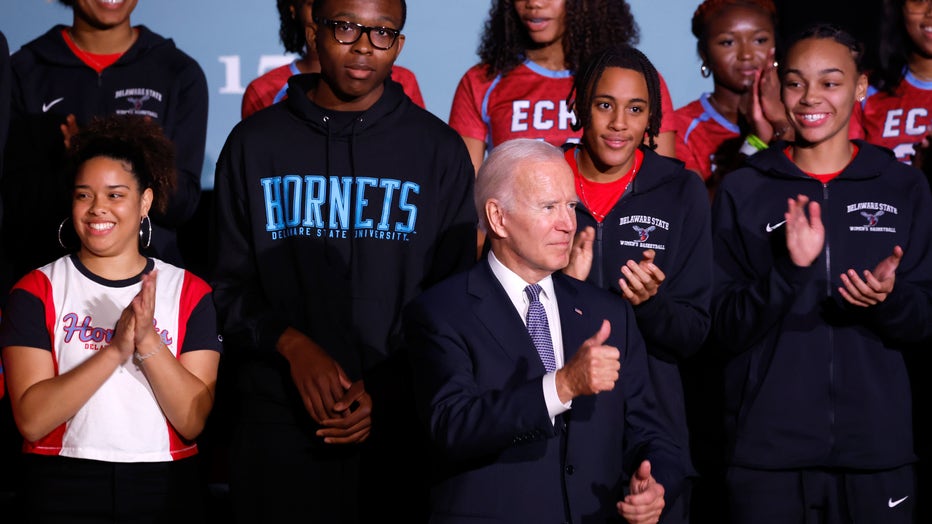 Biden's speech came a day after a federal judge dismissed an effort by six Republican-led states to block the administration's plan to forgive student loan debt for tens of millions of Americans.

U.S. District Judge Henry Autrey in St. Louis wrote that because the six states — Nebraska, Missouri, Arkansas, Iowa, Kansas and South Carolina — failed to establish they had standing, "the Court lacks jurisdiction to hear this case."

Suzanne Gage, spokeswoman for Nebraska Attorney General Doug Peterson, said the states will appeal. She said in a statement that the states "continue to believe that they do in fact have standing to raise their important legal challenges."

Biden announced in August that his administration would cancel up to $20,000 in education debt for huge numbers of borrowers. The announcement immediately became a major political issue ahead of the November midterm elections.

READ MORE: How to apply for student loan debt forgiveness

The states' lawsuit is among a few that have been filed. Earlier Thursday, Supreme Court Justice Amy Coney Barrett rejected an appeal from a Wisconsin taxpayers group seeking to stop the debt cancellation program.

Barrett, who oversees emergency appeals from Wisconsin and neighboring states, did not comment in turning away the appeal from the Brown County Taxpayers Association. The group wrote in its Supreme Court filing that it needed an emergency order because the administration could begin canceling outstanding student debt as soon as Sunday.

In the lawsuit brought by the states, lawyers for the administration said the Department of Education has "broad authority to manage the federal student financial aid programs." A court filing stated that the 2003 Higher Education Relief Opportunities for Students Act, or HEROES Act, allows the secretary of education to waive or modify terms of federal student loans in times of war or national emergency. 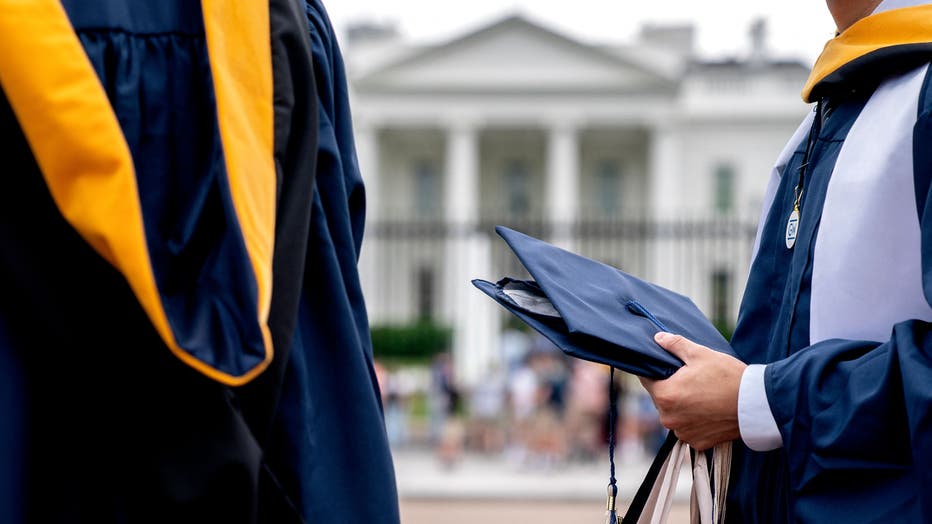 Students from George Washington University wear their graduation gowns outside of the White House in Washington, DC, on May 18, 2022. (Photo by STEFANI REYNOLDS/AFP via Getty Images)

"COVID-19 is such an emergency," the filing stated.

The Congressional Budget Office has said the program will cost about $400 billion over the next three decades. James Campbell, an attorney for the Nebraska attorney general’s office, told Autrey at an Oct. 12 hearing that the administration is acting outside its authorities in a way that will cost states millions of dollars.

The plan would cancel $10,000 in student loan debt for those making less than $125,000 or households with less than $250,000 in income. Pell Grant recipients, who typically demonstrate more financial need, will get an additional $10,000 in debt forgiven.

Conservative attorneys, Republican lawmakers and business-oriented groups have asserted that Biden overstepped his authority in taking such sweeping action without the assent of Congress. They called it an unfair government giveaway for relatively affluent people at the expense of taxpayers who didn’t pursue higher education.

Many Democratic lawmakers facing tough reelection contests have distanced themselves from the plan.

The HEROES Act was enacted after 9/11 to help members of the military. The Justice Department says the law allows Biden to reduce or erase student loan debt during a national emergency. Republicans argue the administration is misinterpreting the law, in part because the pandemic no longer qualifies as a national emergency.

Justice Department attorney Brian Netter told Autrey that fallout from the COVID-19 pandemic is still rippling. He said student loan defaults have skyrocketed over the past 2 1/2 years.

The cancellation applies to federal student loans used to attend undergraduate and graduate school, along with Parent Plus loans. Current college students qualify if their loans were disbursed before July 1.

The plan makes 43 million borrowers eligible for some debt forgiveness, with 20 million who could get their debt erased entirely, according to the administration.