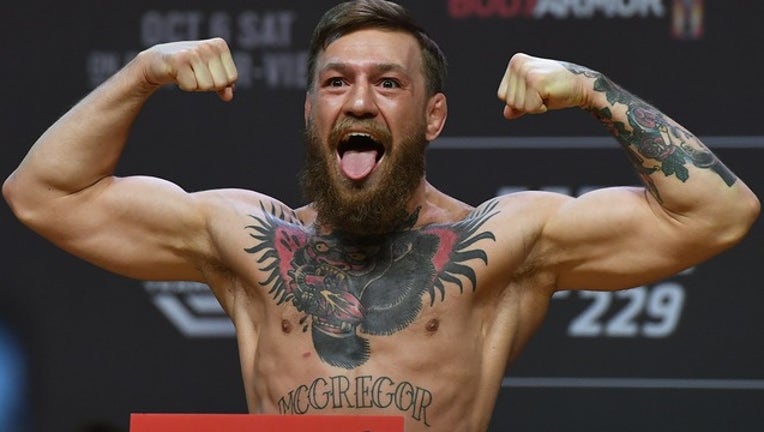 FOX NEWS - Conor McGregor’s whiskey just got knocked out of this bar.

An Irish pub in Florida has announced on Facebook that it will no longer be serving McGregor’s Proper No. Twelve Irish whiskey at its establishment after a video surfaced last week showing the UFC champion punch an older man in the face.

The incident, which reportedly took place on April 6, involved McGregor punching a man sitting at a bar in his home country of Ireland after the man seemingly refused a free shot of the fighter’s signature whiskey brand.

Irish authorities are still investigating the case, but the Salty Shamrock in Apollo Beach has made the decision to no longer offer McGregor’s whiskey – and is pouring its current supply down the toilet.

“That’s the lowlife there that we’ve all supported,” Rice says in the video as he and several employees enter the bathroom. “All right guys, get that in the toilet, because that’s where his whiskey belongs right now. Proper Twelve, to hell with it. It will never be sold at this bar.”

Sean Rice, an Irishman and owner of the bar, also had his employees throw the bottles into the trash hard enough to smash the glass, along with a photo of Conor McGregor wearing the Irish flag across his shoulders, which an employee rips up.

“That’s how I felt about a so-called Irishman punching an old man at a bar,” Rice said at the end of the video. “Just disgusting behavior.”

On the Salty Shamrock’s Facebook page, Rice continued expressing his disdain for McGregor and called upon other Irish bars to follow suit in getting rid of Proper No. Twelve whiskey.

“Official Notice; Due to the recent cowardly and appalling behavior of the so-called Irish professional fighter Conor Mc Gregor, the Salty Shamrock Irish Pub will no longer carry his product nor associate its business with his name,” the post said. “We will discard his whiskey in a fashion that[‘]s only fitting to his behavior. I challenge every Irish bar owner to do the same! He is not a true representative of the Irish people.”

McGregor has not been charged with a crime in the April assault and has not spoken publically about the incident.