The Giant African land snail that officials said was eradicated from Florida last year was found in New Port Richey. They are considered to be one of the most damaging snails in the world. They are an invasive species that are a threat to plants, homes, and people's health.

NEW PORT RICHEY, Fla. - Did you know some snails can cause meningitis?

The Florida Department of Agriculture and Consumer Services (FDACS) is warning Pasco County to beware of the giant African land snail (GALS) that can carry a rare rat lungworm called Angiostrongylus cantonensis, which may cause meningitis in humans, according to the state’s recent "Pest Alert."

"The giant African land snail … is one of the most invasive pests on the planet, causing agricultural and environmental damage wherever it is found," the report added.

After receiving notice of a "possible" population of the snail in New Port Richey, Pasco County on June 21, FDACS said a property survey confirmed the presence of a white form of the giant African land snail two days later.

"The phenotype in Pasco County has a creamy white flesh as opposed to the grey-ish brown flesh of the phenotype that was eradicated in the Miami area," said Erin M. Moffet, FDACS’s communications director.

Moffet told Fox News that Mellon, a mollusk detector dog, is actively surveying for the pest.

The department said on their website that they will treat properties with a specific snail bait that is a metaldehyde-based molluscicide labeled by the U.S. Environmental Protection Agency for residential use.

Metaldehyde is a pesticide used to control snails that’s approved for use in many crops, fruit trees, avocado and citrus orchards, berry plants, banana plants and in limited residential areas, the department said on their website. 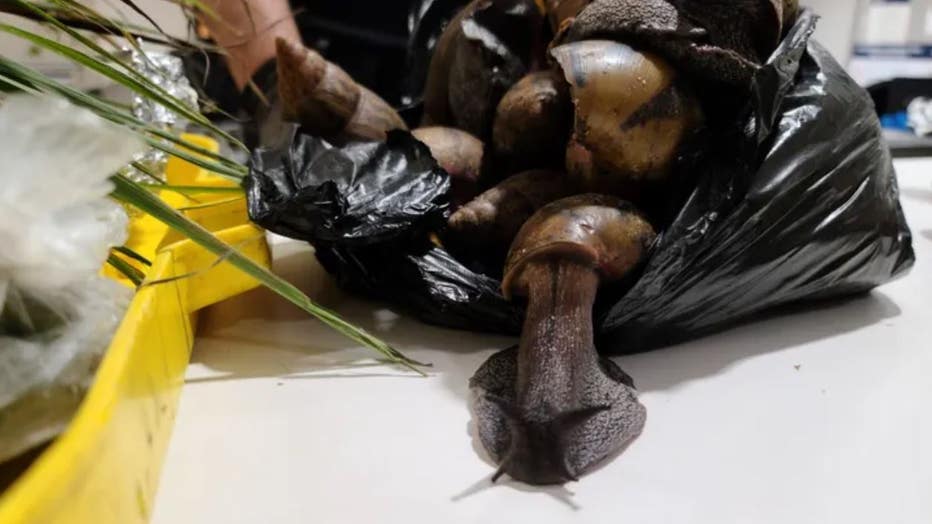 "The giant African land snail … is one of the most invasive pests on the planet, causing agricultural and environmental damage wherever it is found," the report added. (U.S. Customs and Border Protection)

The pesticide interferes with the snail’s mucus production ability, thereby reducing their digestion and mobility, which makes them susceptible to dehydration, per the website.

After eating the metaldehyde, the GALS often seeks hiding places, then becomes inactive and begins to die within days, the department said.

"FDACS's Division of Plant Industry has begun to survey the area, enacted a quarantine and will begin treatment for this detrimental pest on June 29, 2022," the state department said.

"It is unlawful to move the giant African land snail or a regulated article, including but not limited to, plants, plants parts, plants in soil, soil, yard waste, debris, compost or building materials, within, through or from a quarantine area without a compliance agreement."

The snail is popular in the pet trade in other countries, but it is a federally prohibited organism that cannot be legally sold or possessed in the United States, per the FDACS report.

"The giant African land snail is one of the most damaging snails in the world and consumes at least 500 different types of plants. These snails could be devastating to Florida agriculture and natural areas as they cause extensive damage to tropical and subtropical environments," FDACS said on their website.

The snail can cause a disease called Angiostrongliasis, or rat lungworm disease, according to the Centers for Disease Control and Prevention (CDC).

"An infected rat coughs up worms from the lungs into the throat where they are then swallowed by the rat. The worms are now in the rat’s digestive system and eventually end up in the rat’s poop," the CDC said. 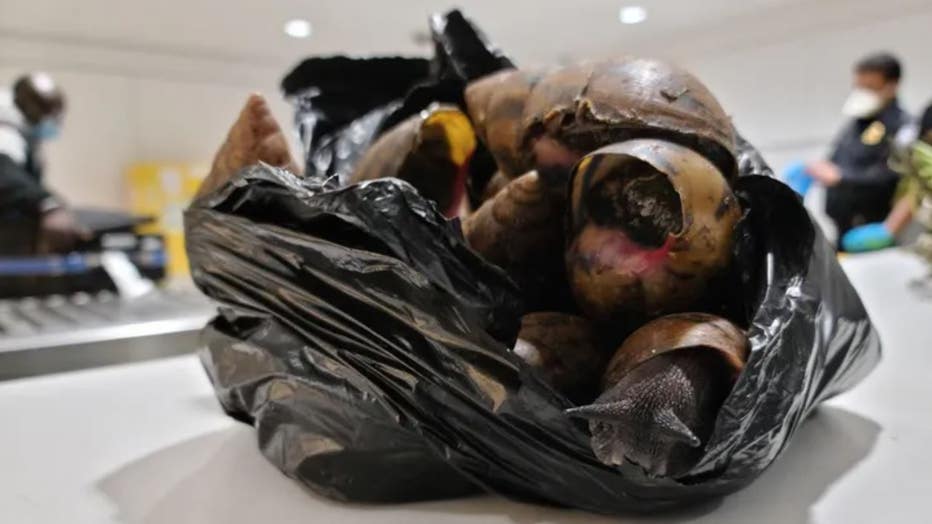 The snail is popular in the pet trade in other countries, but it is a federally prohibited organism that cannot be legally sold or possessed in the United States, per the FDACS report. (U. S. Customs and Border Protection)

A snail gets infected two ways: by either accidentally eating the rat’s poop or the worm penetrating the snail’s body.

"When a rat eats an infected slug or snail, the cycle begins again," the CDC added.

Most cases of rat lungworm disease occur in parts of Asia and the Pacific Islands, but some have been in the Caribbean, Africa and in the United States, like in Hawaii and Louisiana.

So why should humans worry about it?

People get the disease when they eat raw or undercooked snails that are infected with the worms as well as eating fruits or vegetables that have not been washed well that also contain the snails.

"People present with symptoms of bacterial meningitis, such as nausea, vomiting, neck stiffness, and headaches that are often global and severe," the CDC said.

"Most infections of [Angiostrongylus cantonensis] resolve spontaneously over time without specific treatment because the parasite cannot survive for long in the human body. However, serious complications can rarely occur, leading to neurologic dysfunction or death."

Florida Agriculture Commissioner Nikki Fried and FDACS will be holding a press conference on the recent GALS detection from FDACS’ Clearwater office, which will be livestreamed on the department’s Facebook page.