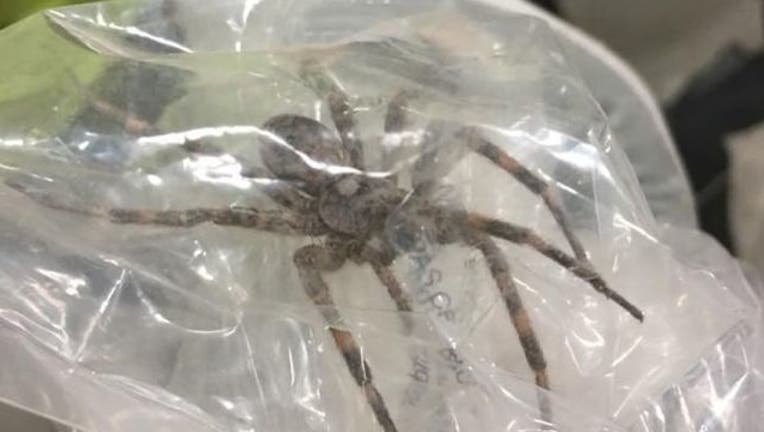 Employees at Godfrey Marine in Elkhart, Indiana, spotted this large spider while building a boat this week. (Jacob Collins)

FOX NEWS - Arachnophobes, beware: A giant spider spotted in the Hoosier State is giving some locals nightmares after an Indiana man shared pictures of the large insect online Tuesday.

A female employee at manufacturer Godfrey Marine in Elkhart, Indiana, was apparently the first to encounter the hairy critter while building a boat. Coworkers helped capture the spider, placing it in a plastic bag so they could relocate it away from their work space.

"They found this giant beast on a boat at work today. Beware all Elkhart country residents. They are out there and they are real," Collins warned in a Facebook post, which has since been shared more than 4,460 times. Hundreds commented on the "creepy" critter.

"That would scare me to death!" one Facebook user exclaimed.

"Yikes. I can’t even imagine," another commented.

"Put a saddle on that bad boy and ride it home," one man joked.

"I would be moving out of Elkhart really fast, lol. Not a BIG spider fan at all," a woman added.

Collins told Fox News the 6-inch spider, which many identified as a fishing spider, was not harmed and released back into the wild. Fishing spiders, commonly mistaken for wolf spiders, are known to live near water.

"Fishing spiders are named so because they are partially aquatic and generally live underneath docks, in corners of boats and in other dark, damp places. Because of their large, 3-inch leg span they are able to walk on water," science website Sciencing explains in a post online.

According to the Indiana Department of Natural Resources (DNR), there are roughly 400 species of spiders in the state, though only two are known to have powerful bites — the poisonous brown recluse and black widow.

However, neither is known to be particularly aggressive and bites from them are "quite rare," the Indiana DNR said.

"Reactions to bites vary by the amount of venom injected and the patient’s age, health, and individual sensitivity," the Indiana DNR continued. "Subjects who have been bitten who experience severe pain, trouble breathing, dizziness or nausea should seek medical attention."