DUBAI, United Arab Emirates (AP) - The World Food Program won the Nobel Peace Prize on Friday for its efforts to combat hunger amid the coronavirus pandemic, recognition that shines light on vulnerable communities across the Middle East and Africa that the U.N. agency seeks to help, those starving and living in war zones that may rarely get the world’s attention.

From Yemen to South Sudan, food insecurity is a growing scourge, made worse by a mixture of military conflict, environmental disaster and the economic fallout of the pandemic. Last year alone, the Rome-based organization provided aid to almost 100 million people in 88 countries. Here’s a look at some of those places:

In war-torn Yemen, described as the world’s worst humanitarian disaster, millions depend each month on WFP for survival. In the nearly six years of conflict between the Iran-backed Houthi rebels and a Saudi-led military coalition, the agency has faced major challenges in getting relief to Yemenis in need. Violence rages and many aid recipients live in notoriously remote regions. Rival armed groups divert food aid to front-line combatants or sell it for profit on the black market. Last year, WFP partially suspended its operations in the rebel-held capital over accusations that the Houthis were stealing the food aid.

Still, WFP’s large-scale operations are considered indispensable in the Arab world’s poorest country, where 20 million people are suffering from a hunger crisis and another 3 million face starvation due to the knock-on effects of the pandemic. The agency helped avert famine two years ago.

“The conditions in this country are such that it's impossible for any humanitarian organization to really do its job well,” said Saleh al-Dobhi, a health ministry official in Yemen's internationally recognized government. “Yet WFP is still doing critical work, even more during the pandemic. We can say this award is deserved.”

The Houthi-run health ministry criticized the agency on the occasion of its Nobel Prize, with spokesman Youssef al-Hadhari telling The Associated Press that its aid “fails to solve the root problems that we suffer from," including the “siege" by the Saudi-led coalition.

Few places in the world are as ravaged as South Sudan, where over half the population is hungry, even two years after the official end of a civil war that killed nearly 400,000 people and sent more than 2 million fleeing the country.

Now widespread flooding has displaced well over a half-million people, further complicating the efforts of WFP and aid partners in reaching hard-hit areas with assistance as food prices rise amid the COVID-19 pandemic. And the threat of deadly violence remains a daily concern in what remains one of the world’s most dangerous countries for humanitarian workers. Just this week, gunmen fired on a WFP boat convoy carrying food aid to flood-stricken communities. WFP said three crew members were wounded and another was missing and likely dead.

In Sudan, where inflation has soared to 166% amid the coronavirus pandemic, an unprecedented 9.6 million people are facing potentially life-threatening levels of food insecurity. The cash-strapped transitional government that took power after the ouster of longtime autocrat Omar al-Bashir is struggling to stop the tailspin. During the pandemic, the number of children going hungry has doubled to 1.1 million. 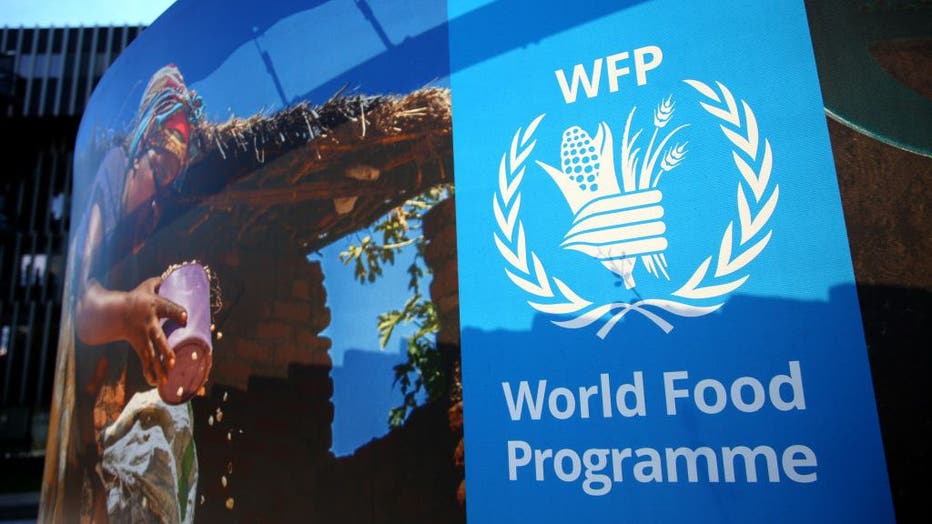 From the war-ravaged region of Darfur, Ibrahim Yousef, director of the largest displacement camp, welcomed the news of WFP’s Nobel award as a bright spot in a desperate time.

“We have been counting on WFP for decades,” said Yousef, director of the Kalma displacement camp in South Darfur, noting that the agency’s food aid has most recently helped fend off malnutrition for those in camps suffering from the fallout of virus-induced lockdowns, severe floods and bouts of ethnic violence. “Without their grain many people here would have nothing at all to eat. We want this award to send a message to the world that we need even more help now than before.”

In Syria, rival groups but mostly government forces have imposed months-long sieges as a weapon of war, leading to major shortages of food in populated civilian areas.

The eastern suburbs of the Syrian capital of Damascus, the central city of Homs and rebel-held parts of the northern city of Aleppo, Syria’s largest, all came under siege by government forces over the course of the country's civil war.

During truces, the World Food Program occasionally managed to take limited amounts of food into besieged towns, where dozens have died of malnutrition and hunger-related illnesses.

Associated Press writers Cara Anna in Johannesburg and Bassem Mroue in Beirut contributed to this report.