Tropical Storm Julia forms in the Atlantic, expected to become hurricane this weekend

ORLANDO, Fla. - Tropical Storm Julia has grown a bit stronger and is expected to become a Category 1 hurricane on Saturday.

On Saturday, Julia was located east of Isla de Providencia Columbia with maximum sustained winds of 65 mph.  Julia is moving toward the west near 18 mph.

Steady to rapid strengthening is forecast while Julia moves  across the southwestern Caribbean Sea today and tonight, and the system is expected to become a hurricane later on Saturday. 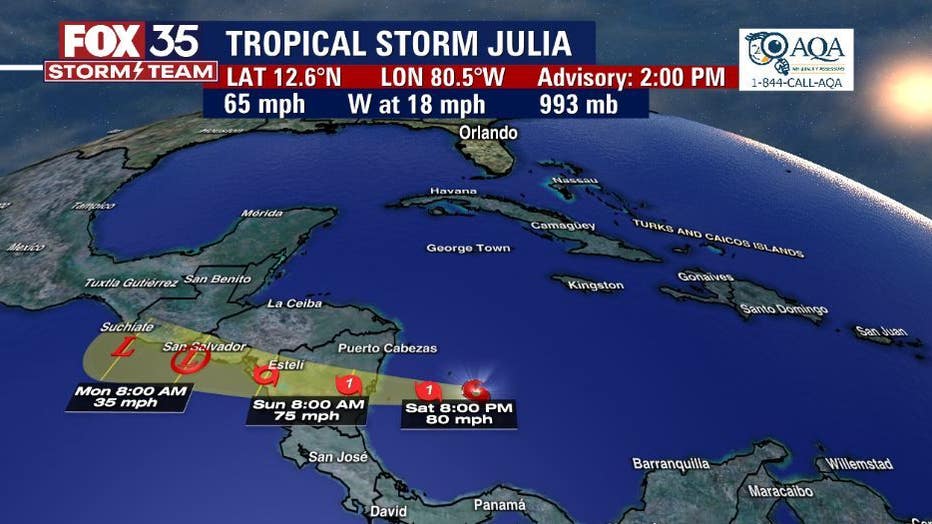 "It is still a tropical storm, but expected to become a hurricane later today," said FOX 35 Storm Team Meteorologist Ian Cassette. "Julia will likely make landfall as a hurricane early Sunday morning and could bring flash flooding and mudslides over Central America."

Weakening is forecast after the center moves inland over Nicaragua on Sunday, but Julia could still be at or near tropical storm strength when it moves near or along the Pacific coasts of Nicaragua, Honduras, and El Salvador Sunday night and Monday. Julia is forecast to become a remnant low by late Monday and dissipate by Tuesday.

The system is not expected to be any threat to Florida or the rest of the United States.

So far, the 2022 Atlantic hurricane center has produced nine named storms: Alex, Bonnie, Colin, Danielle, Earl, Fiona, Gaston, Hermine, and Ian. The next two names on the list are Julia and Karl. October ranks as the third-most-active month (behind September and August) for tropical activity in the Atlantic Basin, typically producing about two named storms, one of which becomes a hurricane. And every other October, on average, one of those hurricanes intensifies into a "major hurricane," achieving Category 3 or higher intensity on the Saffir-Simpson Hurricane Wind Scale.