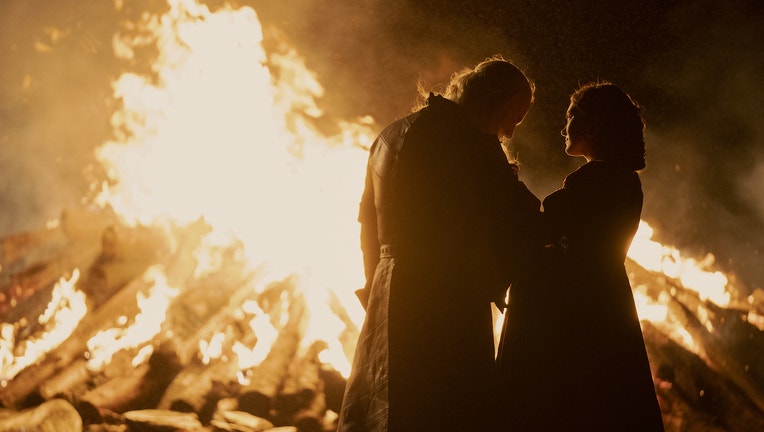 London, U.K. - Welcome to "House of the Dragon" recaps! In the third episode, Rhaenyra enters her rebellious boar-killing phase, Viserys says hello to some of the consequences of his actions and Daemon wins a war with a tantrum. Here’s all the latest from Westeros. "House of the Dragon" is streaming via HBO Max; FOX Television Stations’ coverage will run weekly.

As the Targaryen prequel progresses, we’re seeing more names (and more blood) than ever. So let’s get right into it.

The big news out of Westeros 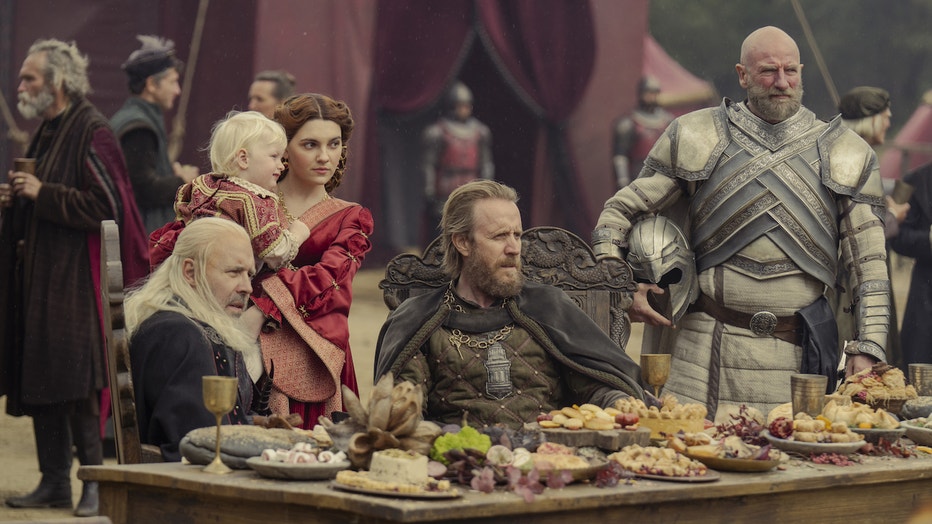 Being a younger sibling is no joke. Or an elder sibling. Or being a sibling at all.

Unlike "Game of Thrones" which followed a linear progression, "House of the Dragon" is favoring time-jumps. Considering this season only has seven episodes to fit in another 20 or so years of Westerosi history, that approach makes sense, but it’s a little disconcerting to see Alicent (Emily Carey) very pregnant when in the last episode she was just announced as engaged to be married. The episode only gets more fraught from there, because surprise, there’s a toddler in the mix.

RELATED: ‘House of the Dragon’ 101: Who's who in this new game of thrones

The only people who seem to be having a good time? Perhaps young baby Aegon, who is celebrating his second birthday, and occassionally King Viserys (Paddy Considine) when he has too much wine. Even then, he’s tormented by his own bad decisions.

Now that King Viserys Targaryen has re-married and had a male child, with seemingly more babies on the way, the pressure to marry is now on 17-year-old Princess Rhaenyra (Milly Alcock). And despite everyone else settling into Queen Alicent Hightower’s reign — even Alicent herself — Rhaenyra, who used to be her best friend, is firmly still not over it. It’s not just a personal grudge, either. She’s no fool and feels the machinations to replace her with young Aegon swirling around her, whether they’re performed by various ladies at court or Otto Hightower (Rhys Ifans) himself. 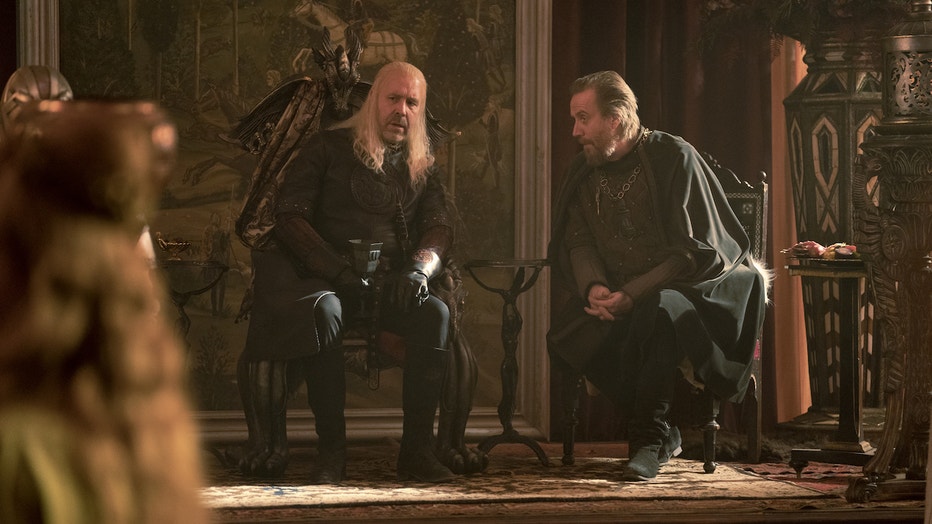 It doesn’t help that it’s Aegon’s nameday (that’s Westerosi for ‘birthday’), and there’s a rather ginormous hunting event taking place to celebrate him — oh, and the appearance of a rare White Hart coincides with his nameday, which Otto believes means Aegon should definitely be heir. It has absolutely nothing to do with the fact baby Aegon is, in fact, his own grandson.

WATCH FREE ON TUBI: The historical drama series "Rome" — get the app

Between scenes of Viserys Targaryen realizing that too many heirs are just as distressing as too few (what with the whisperings of already-fraught camps beginning to form around his heirs), we get news of the Stepstones. The threat has not lessened in the last two years — in fact, things appear to be in rather dire straits. It turns out, a dragon cannot destroy people who are parked in an inaccessible cave, and therefore Team Daemon + Corlys (Matt Smith and Steve Toussaint) is losing. 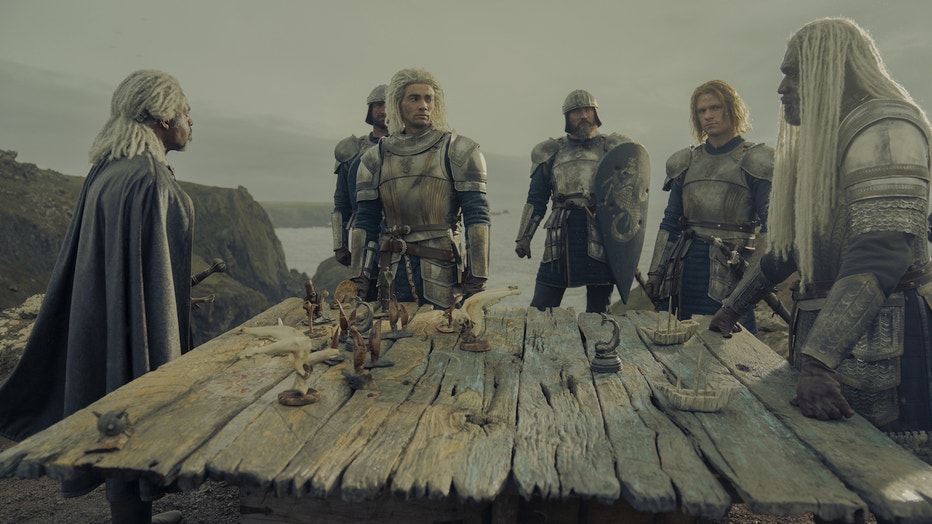 Viserys stubbornly ignores this, listening instead to his council who say that interfering in a war he didn’t start would show that the crown is weak. Daemon, who spent the last episode having a temper tantrum, comes into his own in "Second of his Name." He plots with Corlys’ brother Vaemond (Wil Johnson) and son Laenor (John Macmillan) — the latter of whom is named as a potential suitor for Rhaenyra. Neither of the Velaryons particularly like Daemon, but mutiny isn’t on the table, due to his close connection to the crown. And as it happens, said crown decides to send aid after all, spurred on by Alicent Hightower, who so far seems to be the only person willing to help somebody that isn’t herself.

It turns out that the message of aid, rather than the aid itself, is enough to turn the tide. After reading the patronizing letter conveying Viserys’ willingness to stoop down and help (and a subsequent brief outburst of violence from the letter’s recipient), the prince willingly throws himself into the Stepstones war-zone — without his dragon. 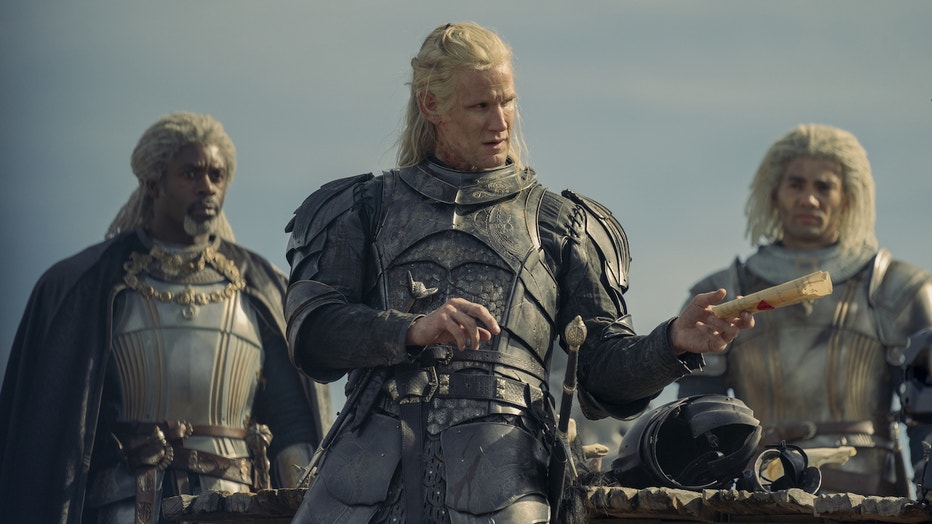 RELATED: ‘House of the Dragon’ 101: What are the Stepstones and where’s Old Valyria

Well, without his dragon at first. Daemon’s appearance draws out the Triarchy soldiers, who surround him at all sides until the Prince’s dragon, Caraxes, burns them all. Daemon both proves a point and wins the war, slicing the Crabfeeder in half with Dark Sister, his sword.

Also: Don’t count Rhaenyra out yet

But what of the Princess? Well, she’s angry and lonely — and she might be better at this than everyone thinks. 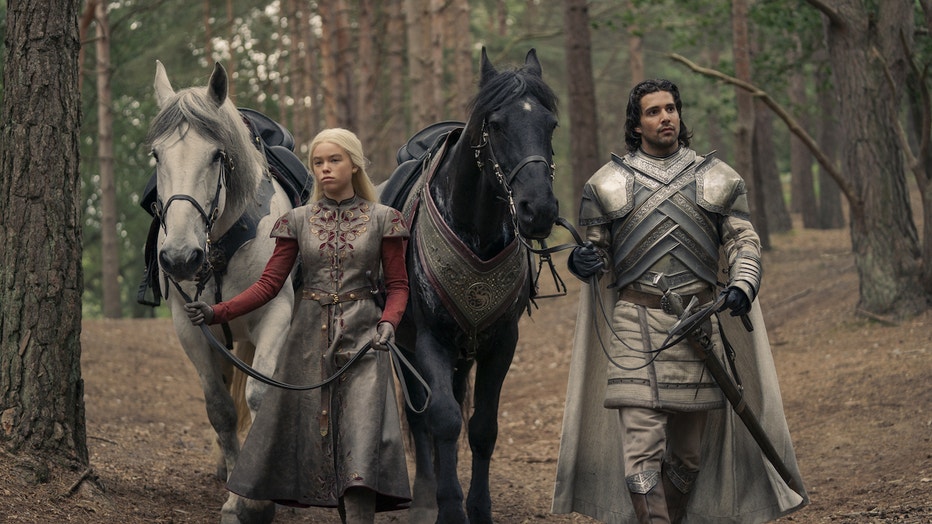 At the start of the episode Rhaenyra (Milly Alcock), still somewhat grief-stricken over her late mother, has seemingly given up on acting as heir, trading actions for sullen answers. The only time she even tries to use her Princess status is against her former best friend, when Queen Alicent tries to encourage her to come into the fold of their… pretty weird family dynamic.

It’s an eventful episode for Rhaenyra: she blows up at her father when he encourages a match with Jason Lannister (Jefferson Hall); runs into the woods with Ser Criston Cole (Fabien Frankel), who restores her faith in her power; and she’s the one who sees the White Hart that everyone posits is a positive sign. At the end of the day, Rhaenyra ends up winning the battle, as Viserys vows that she will not be supplanted by any sons and will be allowed to choose her own husband.

Interestingly, "Game of Thrones" fans will likely note some parallels to the undoing of King Robert I Baratheon (Mary Addy). Rhaenyra helps to slay a boar and refuses to kill the White Hart; in some 200 years, King Robert will fail to kill a White Hart and instead go after a boar, which will give him a fatal wound.

Rhaenyra seems to believe she’s a thorn in everyone’s side right now, but with marriage in the mix we’re pondering this question: Shouldn’t Rhaenyra’s adversaries be more scared of a dragon-rider with a family of heirs of her own, than a dragon-rider that’s just minding her own business? 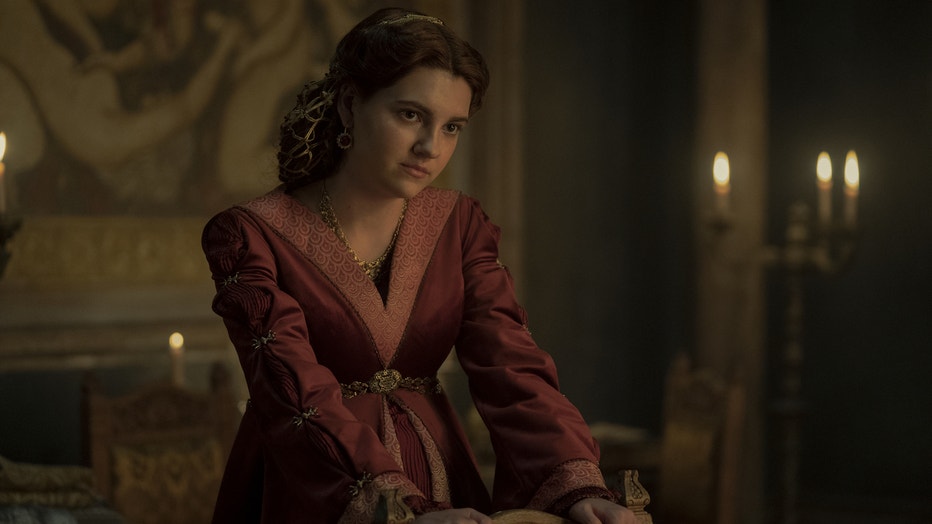 There’s evidence that King Viserys and Queen Alicent do indeed spend time with each other, but this episode doesn’t show us much of it. What we do see, however, is the contrast between the Alicent of two years ago and the Queen Alicent we see now. Before, she blindly followed her father Otto Hightower’s enforced ‘suggestions,’ but now she treads more carefully. Otto suggests that Alicent should make the King see that her son, Aegon, should be heir, but still hoping to mend the bridge between herself and Rhaenyra, she speaks with the King about the Stepstones. Her advice does inadvertently end the war, though nobody will attribute it to her.

"Nobody cares about me." — Rhaenyra (Milly Alcock) 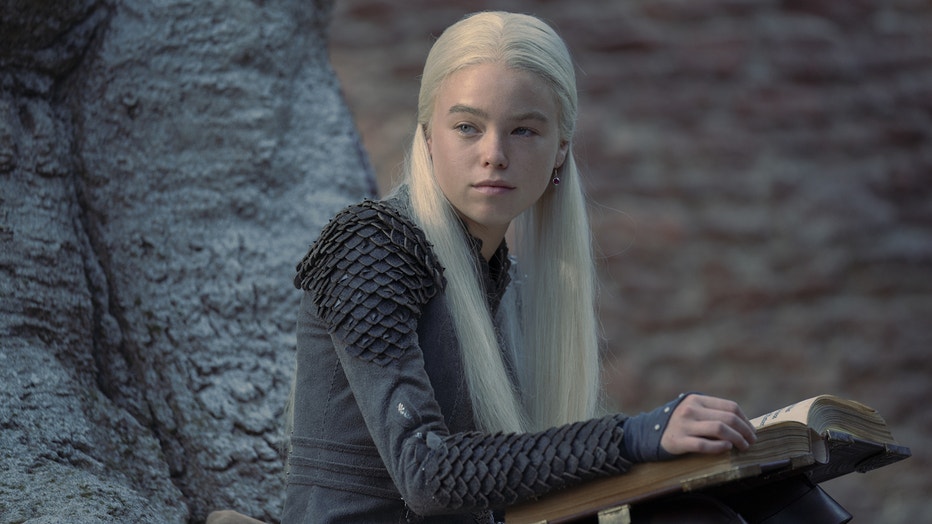 Rhaenyra is set to get all the best lines, but this one is particularly noteworthy: it applies to her feelings about the realm, those who she thinks prefers her younger half-brother and, most importantly, her family.

Daemon (Matt Smith) deciding to just go and literally win a war because he’s furious at his brother might be quite possibly the most dramatic and funniest reason for a battle we’ve ever seen in the "Game of Thrones" universe. The footage of him running desperately across the sands to kill the Crabfeeder is epic.

WATCH FREE ON TUBI: "The Tale of Sweeney Todd" — get the app

We promise this isn’t favoritism, but Milly Alcock is just so great yet again. Still, though they may have been overshadowed by Alcock stabbing a boar, the nuanced performances of Paddy Considine and Emily Carey are super intriguing to watch, especially as their character dynamic has changed so much. 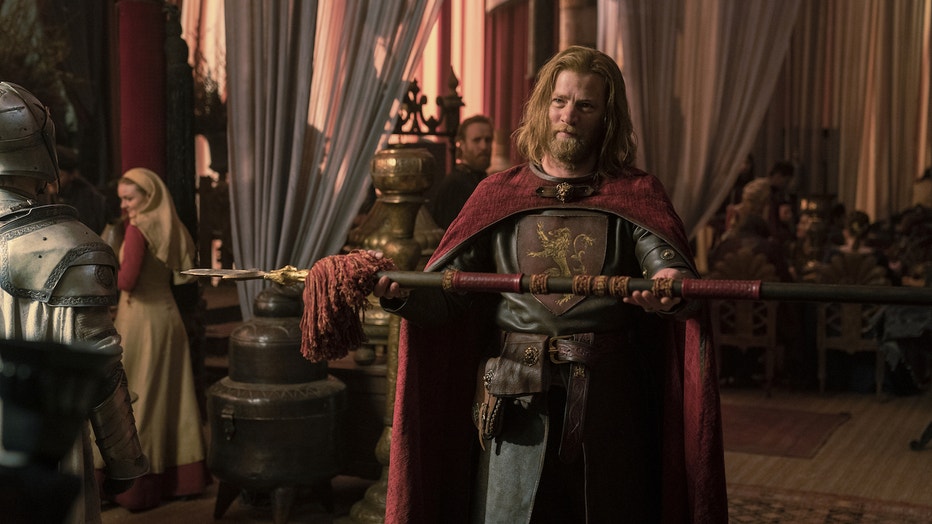 We’re pretty much waiting for the pot to boil over, and a simmering pot is never as interesting to watch as an exploding-and-possibly-on-fire one — so it should come as no surprise that the third episode is a bit rougher than its predecessors. But "Second of his Name" does deliver a closer look into how and why these relationships are failing.

WATCH FREE ON TUBI: David Bowie in "Labyrinth" — get the app

As much as we miss Rhaenys (Eve Best) and Corlys (Steven Toussiant) in the halls of King’s Landing, the political (and often snarky) conversation between ladies at the hunt makes up for the lack of shrewd Sea Snake commentary. The arrival a Lannister (Jefferson Hall, who also played Hugh of the Vale in season one of "Game of Thrones") is interesting — it seems that obnoxious self-importance, title-grabbing tendencies and huge wealth have been a constant in that family. And Rhaenyra’s relationship with Criston (Fabien Frankel) offers some intrigue, especially given how central the theme of marriage is to this episode, as he seems to be her only friend. We can’t help but love her riding back into camp with blood all over her, looking like the disgrace she feels she is. More unhinged Rhaenyra, please.

Important decisions from all sides.

About the writer: Chloe Johnson is a freelance writer, magazine editor and longtime Sansa Stark fan. You can find her other work at The Bookseller, The Grammys, and The Independent.

How to watch "Game of Thrones: House of the Dragon" episode three

The third episode of "House of the Dragon" is currently available On Demand for HBO subscribers; it’s also streaming on HBO Max.

When is the next episode of "Game of Thrones: House of the Dragon"?

Episode four of "House of the Dragon" premieres on HBO on Sunday, Sept. 11 at 9 p.m. ET/PT. New episodes air weekly through Oct. 23.

When will "Game of Thrones: House of the Dragon" be streaming?

The third episode of "House of the Dragon" is streaming on HBO Max now. New episodes will begin streaming every Sunday at 9 p.m. ET/6 p.m. PT — so West Coast fans can watch along simultaneously.