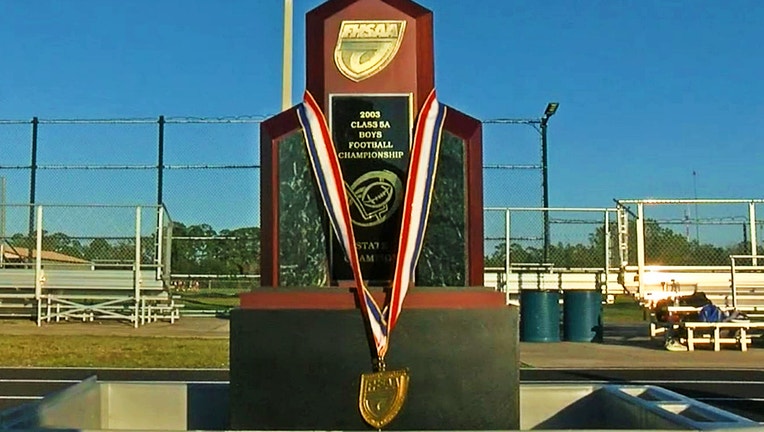 DAYTONA BEACH, Fla. - Daytona Beach's Mainland High School is one of a few Central Florida teams that will play for a football state championship.

As the Buccaneers get ready for their biggest game of the season, every week at practice, they have to walk by the trophy from their last State Championship in 2003, which sits on the sidelines. It serves as both a reminder and a goal.

"That's a reminder since last week to the guys what we're playing for. What we're trying to accomplish and how close we are," said Head Coach Travis Roland. "Because now, you know, last week we were one win away. Now we're definitely four quarters away from getting another trophy. For them, it's just something to be able to look at, and it's really cool. Like it's ancient to them, but it's definitely something for them to push for and know that they're really close to achieving a goal. They're realizing how close they are, but the work that still has to be done to accomplish it because we're playing a good opponent in Lake Wales."

"It makes me feel like it's my turn, you know? Like seeing the trophy, like alright, I gotta go get that! That's ours!" said Mainland Senior Malcolm Curry.

The fact that this Bucs team has a chance to get that trophy is pretty remarkable. This is just the second season for former Bucs captain, player, and state champ  Travis Roland as Head Coach. And his team won just five games last season. But he's turned things around with one simple message.

"You know, we hold our guys to a very tough standard, and I think this year more than last year, we made sure that standard was upheld from the top, starting with me all the way down to the bottom," said Roland. "So just upholding the standard of the Buc way is kinda what helped us get back to the top of the mountain here again."

"The biggest reason was discipline and focus," said Curry. "We lacked a lot of discipline last year. We played around a lot. And that got us beat some games."

This team is hoping that the rebirth of the Buc way will help them add another trophy to their cabinet.