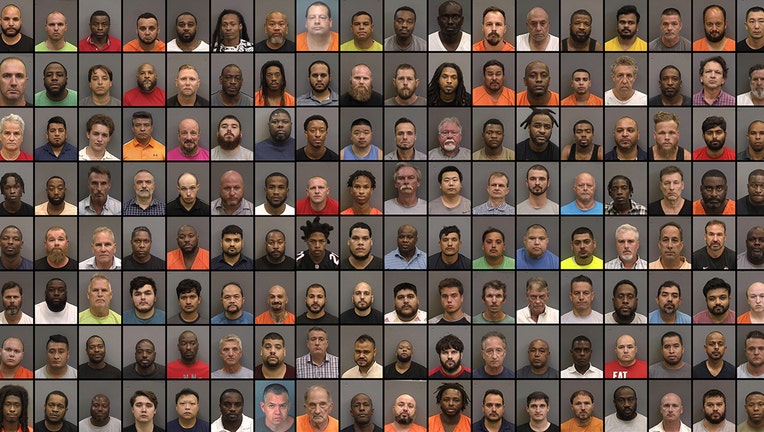 TAMPA, Fla. - Over the span of a four-month operation, that included multiple stings, Hillsborough County undercover detectives arrested 176 men who unknowingly made contact with law enforcement to try to buy sex – and several were busted for soliciting minors.

During a press conference, Hillsborough County Sheriff Chad Chronister highlighted several of the cases, including a man who was in town during his honeymoon. The sheriff said he reached out online to buy sex after his new wife had gone to sleep in their hotel.

The stings and operations started in April with a focus on stopping the "demand for prosecution." According to Sheriff Chronister, most of the men arrested are facing charges related to the solicitation of prostitution.

Some "Johns" were arrested after sharing photos and videos with the undercover detectives. The sheriff said the suspects thought they were speaking with underage boys or girls. The suspects then drove to meet the supposed minors, but ended up facing deputies during the visit, he added.

The sheriff said the operation also resulted in the rescue of eight women, including two teenagers, ages 16 and 17.

He went on to say that the human trafficking department was formed three years ago in anticipation of large events, such as national championship games and WrestleMania, which tend to bring illegal human trafficking to cities. But, he said, the problem is here year-round.

"It became immediately clear — when we did an operation after these events were gone — that we still had the same number of individuals that wanted to purchase another individual for sex," he said Thursday. "We had a human trafficking problem and we need to ramp up our efforts."

Since the formation of the sheriff's office Human Trafficking Squad, officials said they made 360 arrests – mostly men busted on prostitution and solicitation-related charges, but they've also been able to put several trafficking suspects behind bars.

"When I became Sheriff — I made a commitment to fight illegal prostitution and to protect the citizens of Hillsborough County from being victimized by predators in our midst," said Sheriff Chronister. "The Human Trafficking Squad has been given all the resources they need to save the victims, who often find themselves in a dark and dangerous life with no way out."