The video shows Colin Munro's two young daughters running to welcome him home after being away for nearly two weeks battling bushfires.

NARRAWALLEE, Australia - Touching video captured the moment an Australia firefighter was reunited with his daughters after leaving for nearly two weeks to help battle deadly flames devastating the country.

Brooke Munro shared the touching moment on Instagram, which shows her husband, Colin, returning home Jan. 6 after spending 11 days away from his family. Colin Munro is a New South Wales Rural Fire Service firefighter, according to Storyful.

In the video, daughters Ruby and Arkie are seen running toward their father after he pulls up to the driveway of his parents’ home in the coastal village of Narrawallee. The family was forced to leave their own house on Dec. 26, according to Storyful. 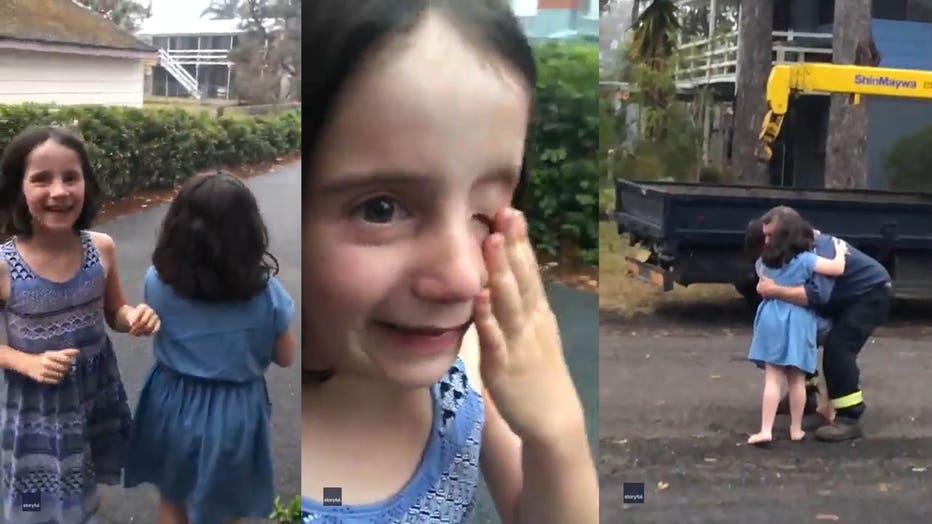 Video shared by Brooke Munro shows the moment an Australia firefighter was reunited with his two young daughters after leaving for nearly two weeks to help battle the fires. (Photo credit: Brooke Munro via Storyful)

“It’s been 11 long days since we last saw him,” Brooke Munro wrote on Instagram. “Fighting these blasted fires since late November. The clip says it all.”

Colin Munro told media outlets that battling flames on the front line has been a “killer” due to the hot weather.

“I'm middle-aged and carrying a fair bit of weight so steep hills and short legs is not a great combination,” he told the Daily Mail.

He continued: “Training with the RFS is superb, it's absolutely unparalleled, and so that training kicks in and off you go. It's very highly structured and we're pretty safe out there. But for the people left at home I think it's bewildering and terrifying.”

Brooke Munro told Storyful that after “several evacuations and many sleepless nights,” the family was thrilled to be reunited — including the family dog.

At least least 27 people have been killed in Australia’s catastrophic bushfires, which have also destroyed more than 2,000 homes and scorched an area larger than the U.S. state of Indiana since September.

Four of the casualties have been firefighters.