LAKELAND, Fla. - Steve Connors couldn’t have been any happier going back to work as a paramedic at the Lakeland Fire Department Tuesday.

“It’s surreal,” he told FOX 13. “Honestly, I didn’t think it would happen a few months ago, laying there completely paralyzed.”

Over the last year, Connors has gone through a horrific journey.

Last December, he noticed one of his toes went numb as he was leaving the shower. Then a second toe went numb. The lack of sensation began moving up his body.

“Once it got to my diaphragm, I started having trouble breathing,” he said.

He was diagnosed with Guillain-Barré, a syndrome where the immune system attacks the nerves and causes intense, unrelenting pain.

“It was like pouring lava down your spine, ripping the muscles off your bones,” he recalled. ”Even with morphine, fentanyl, whatever they were pumping into me, it was still incredibly painful.” 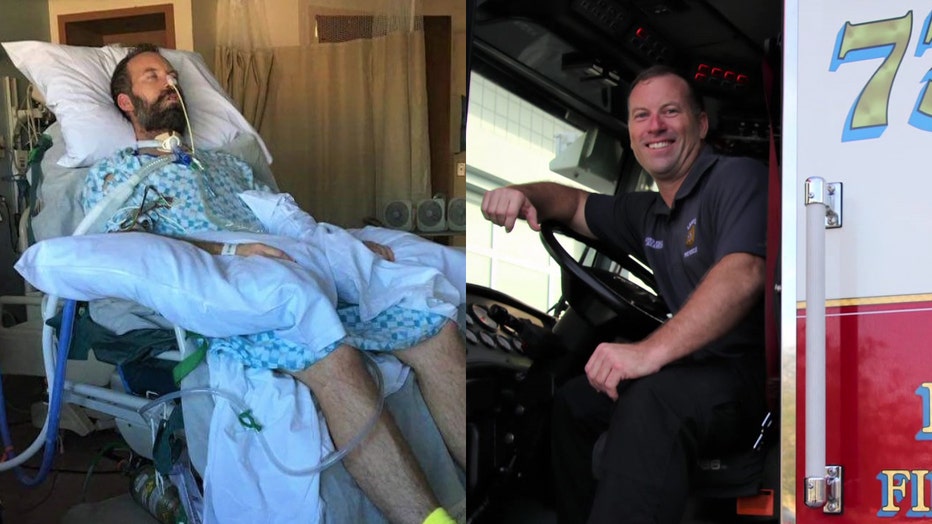 Over the course of his debilitating illness, Connors was hospitalized for months, lost more than 60 pounds, became paralyzed, had to be intubated, and took his nourishment through a feeding tube.

“It was heartbreaking,” recalled Lakeland Fire Chief Doug Riley. “I remember like it was yesterday. When we walked in, our hearts broke to see him that way.”

Throughout the ordeal, two things kept Connors going: his family and what he learned as a U.S. Army paratrooper, where his work ethic was, “Always 110%, at everything you do.”

Coming back from the darkness was not easy.

Right before he was about to start rehab in March, his lung collapsed.

Connors had to learn to walk again, and he did, literally one step at a time.

Even small things that had come easily all his life had become extremely difficult.

Determined, he fought hard. The road back to relatively-normal life takes many people with Guillain-Barré syndrome years to accomplish.

Connors pulled it off in less than one year and couldn’t wait to get back to his job.

“He walked in the door like he had never missed a beat,” said the chief.