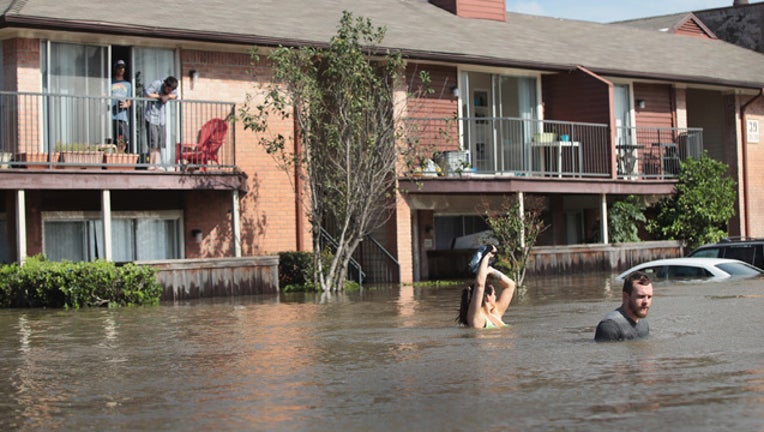 HOUSTON, TX - Residents wait for rescue at an apartment complex after it was inundated with water following Hurricane Harvey on August 30, 2017 in Houston, Texas. (Photo by Scott Olson/Getty Images)

HOUSTON (AP) - Now that the sun is finally shining and the murky, brown floodwaters are slowly receding in much of the Houston area, grim reality is setting in.

Harvey is about to release its dead.

In Texas, the official death toll surpassed 30 on Wednesday and was expected to climb as authorities investigated several other deaths to determine whether they were storm related. Officials fear that the number of fatalities will climb sharply in coming days as neighbors, emergency workers and family members search for the missing - and discover the bodies of people trapped in waterlogged homes or encased in underwater graves inside cars. And the death toll might rise even further in the recovery phase, from car crashes, carbon monoxide poisoning or other accidents during cleanup.

"Historically all estimates of deaths are wrong in the beginning," said Craig Fugate, who was the Federal Emergency Management Agency director from 2009 until earlier this year.

Already, the nation is shocked by the horrors revealed as the storm moves out of the area and east toward Louisiana and points north.

The first confirmed fatality came early: A man in the Gulf coastal city of Rockport was killed in a fire late Friday as the storm raged ashore.

On Wednesday, officials located a submerged van that seven members of a Houston family had been traveling in when it was swept off a bridge and into a storm-ravaged bayou. Samuel Saldivar told police he was trying to bring his elderly parents and his brother's four grandchildren to safety from their flooded home on Sunday when the van he was driving was tossed by a strong current into the bayou as it crossed the bridge. He escaped through a window but the six others were trapped when the van's partially submerged sliding door wouldn't open.

Also Wednesday, authorities said 65-year-old Donald Rogers and his 58-year-old wife, Rochelle, drowned when they were swept away by a current after driving their pickup truck into floodwaters in a rural area southwest of Houston. Fort Bend County Sheriff's Maj. Chad Norvell said the couple was on the phone with 911 asking for help when the line went silent. When officers found the truck, it was completely submerged.

On Tuesday afternoon, a 3-year-old girl was found alive in a rain-swollen canal, clinging to the body of her drowned mother in Beaumont, Texas. A second woman was confirmed dead in Beaumont on Wednesday.

Earlier Tuesday, the body of 61-year-old Houston Police Sgt. Steve Perez was found in his car. He'd been swept down a flooded road as he drove to his precinct, determined to serve his community.

Eleven other confirmed deaths, some of which were listed on a Harris County database, showed people were found floating in waters, some in homes or businesses, others near cars. Among those victims was Ruben Jordan, a high school basketball coach, who was last seen late Saturday helping people through flood waters. His family was informed on Monday that he had died in the floods.

"The sad thing is, of the deaths we've seen, we're going to see more, unfortunately," said Jeff Schlegelmilch, the deputy director of the National Center for Disaster Preparedness at Columbia University. "That number doesn't stop moving up until we're well into the recovery phase."

No official number of the missing has been released, and a spokesman for the Harris County Sheriff's Office, where Houston is located, said there isn't a specific strategy in place to look for additional bodies.

"We are going to go out and try to find any potential victims that may be there," said the spokesman, Jake Smith. "We are also encouraging the public if they come across anything, we strongly urge them to call 911 if they find a body or a potential victim."

Houston Police Chief Art Acevedo said the department had received 47 missing persons reports since Harvey inundated the city and 27 of those individuals have been located.

Photos with pleas for help have been posted on social media, cut-and-pasted and retweeted by thousands of people as desperate family members seek loved ones they fear may be dead - but who may only have a cellphone without power. The uncertainty is terrifying.

One of the worries, said Schlegelmilch, is that many of the severely flooded neighborhoods weren't in evacuation areas.

Additionally, the people most likely to be found dead are the elderly, the infirm and the people who were isolated from others - along with folks who didn't have the means or wherewithal to flee. Sometimes it's a matter of having the strength to wade through flood waters a few blocks to safety, or to pull one's self up onto a roof.

Fugate, the former FEMA head, said it's also common for people to die during the recovery phase, when stress levels are high and people aren't making clear-headed decisions.

"Stay safe, stay home, stay off the roads if you can. Don't go sightseeing," he warned.

Still, experts say there is some good news: They don't expect the death toll from Harvey to come anywhere close to that of Katrina, when 1,800 people died. Many of those flood-related fatalities came when a levee broke and water inundated New Orleans. People were stranded in extreme heat and the federal response was slow. Emergency managers learned painful lessons during Katrina, and have put those lessons to use in this storm.

During Harvey, "state and local officials and FEMA were mobilizing, water rescue teams were prepared, in anticipation of this," said Fugate, adding that safe shelters were almost immediately in place for Texas residents, unlike New Orleans. "That provided faster rescues."

One other thing seems to have helped Houston in its time of need: the residents themselves.

"Neighbors helping neighbors," Fugate said. "That will keep the death toll down."