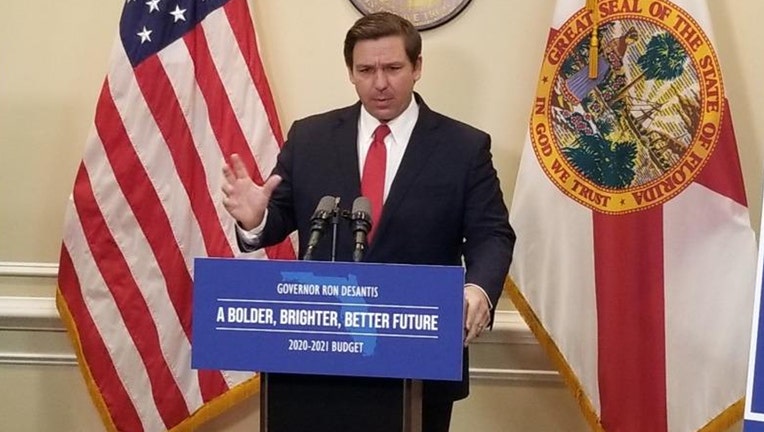 The proposal is an initial step as lawmakers prepare for the January start of the annual legislative session, which will include negotiating a budget for the fiscal year that starts July 1. Lawmakers will decide whether to move forward with DeSantis’ priorities, such as his plan to set minimum teacher salaries at $47,500 --- an idea that would cost $603 million next year.

DeSantis tried to emphasize during a news conference at the Capitol that the state could afford such big-ticket proposals, though state analysts have warned of a slowing economy.

“I told my folks, I said we have got to do this in a way that is fiscally responsible and fiscally sustainable,” DeSantis said. “We’re not going to budge on that. And I really believe that you have the ability to do a lot of really bold things but do that within the context of a budget that was built for the long haul. And I think that that’s what we have done today.”

DeSantis overall proposal is slightly larger than the current year’s $91 billion budget. In recent weeks, he had dribbled out details of the spending plan, including the proposal to set minimum teacher salaries and a separate $300 million proposal that would provide bonuses to teachers and principals at high-performing and improving public schools.

Also, DeSantis has made a priority since taking office in January of trying to clean up waterways, after massive problems with toxic algae and red tide in Southeast and Southwest Florida. The proposal includes about $625 million for projects such as Everglades restoration, water-quality improvements and springs restoration that DeSantis said is part of a four-year, $2.5 billion effort.

The proposal also includes $100 million for the Florida Forever preservation program, as DeSantis said he wants to “keep the momentum” on the environment.

DeSantis also is recommending $480.5 million in budget cuts. But the largest chunk of that, $284.5 million, would come from eliminating the controversial “Best and Brightest” teacher-bonus program. DeSantis, in turn, wants to spend $300 million on his new bonus program for teachers and principals.

It remains unclear how the House and Senate will handle DeSantis’ proposals after the legislative session starts Jan. 14. House Speaker Jose Oliva, R-Miami Lakes, offered a cool response last month to DeSantis’ teacher-pay plan and pointed to concerns about spending.

Senate President Bill Galvano, R-Bradenton, issued a statement quickly after DeSantis’ news conference Monday, saying the governor’s recommendations “reflect many priorities my Senate colleagues and I share.” But he did not commit support for specific proposals and indicated the Senate will watch the work of analysts who during the next two months will hold a series of “estimating conferences” to delve into state expenses and revenues.

“In the coming days and weeks, we will evaluate the governor’s budget in more detail as we work to prepare a 2020-2021 General Appropriations Act for consideration in the Senate early next year,” Galvano said. “We are closely monitoring the next round of consensus estimating conferences, which will provide important updates in terms of anticipated needs in each area of the budget. We are also anticipating a new general revenue estimate, which will indicate if there has been a change in the amount of revenue available to meet those needs.”

While the teacher-pay proposal has drawn much of the budget attention in recent weeks, DeSantis’ spending plan also addressed other high-profile issues.

For example, he is seeking $50 million for the “Job Growth Grant Fund,” up from $40 million this year. The economic-development program was created under former Gov. Rick Scott after a legislative battle about providing incentive money directly to businesses.

Also, DeSantis wants to continue providing $50 million to the tourism-marketing agency Visit Florida, which House leaders have sought to eliminate. He acknowledged that the issue will be a “source of contention.”