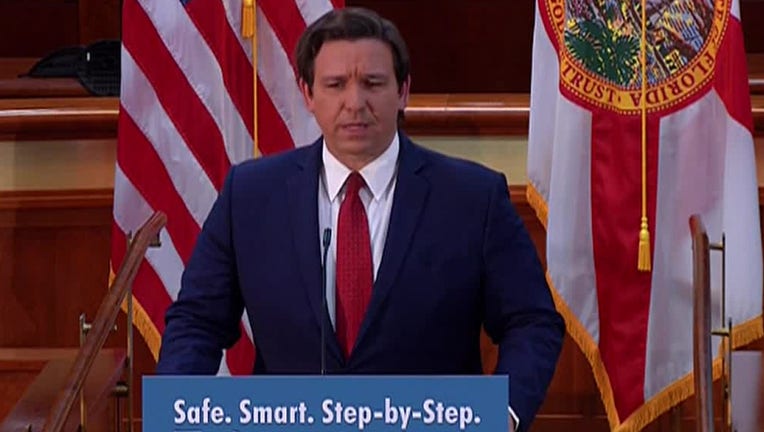 DeSantis held the news conference amid increasing questions about the surge in cases and just hours after state Agriculture Commissioner Nikki Fried accused him of acting “recklessly.”

DeSantis attributed the increases to state efforts to target testing in high-risk areas such as nursing homes and prisons. Also, he pointed to several cluster areas in the state that he said skewed the percentage of positive cases upward.

The governor said 90 workers at an Alachua County watermelon farm tested positive for the virus after a migrant worker from Miami arrived at the site. Health officials tested 100 workers at the farm and 90 came up positive.

"That’s a 90 percent positivity. And part of the reason is when you have workers like that, they are living in really close confines, sometimes multi-generational," DeSantis said.

The governor cited several other examples, but he said the state needs to stay the course on reopening its economy and activities.

“You have to have society function, you have to be able to have a cohesive society," he said. "To suppress a lot of working-age people at this point, I don’t think would be highly effective.”

DeSantis also said he would not require people to wear masks to control the community spread of the virus.

“We’re not going to be doing that. I think it would be applied unevenly, and I just don’t think it would end up working,” the governor said of any requirement to mandate the use of masks.

But Fried earlier bashed DeSantis after the state recorded nearly 2,800 new cases Tuesday and the overall number of cases topped 80,000.

“Today’s record-high new cases makes it clear: Governor DeSantis has lost control of Florida’s COVID-19 response,” Fried said in a statement. “His policies are simply not working, and he’s recklessly reopening Florida despite the data screaming for caution.”

Fried, who has repeatedly clashed with DeSantis in recent months, asked local government officials to encourage residents to stay home and to don masks and adhere to social distancing recommendations when they go out in public.

“If the governor is unwilling to make the right decisions, then they must be made in our cities, our states, and our homes,” Fried said in the statement.

After the news conference, Fried’s office also disputed that the agriculture industry is a primary driver of the surge in cases.

“Commissioner Fried has been in close, regular communication with Florida’s leading agricultural associations throughout COVID-19,” Franco Ripple, a Fried spokesman said in a prepared statement. “There is evidence of community spread of COVID-19 in areas where farms are located, but the vast majority of farmworkers left agricultural communities several weeks ago, as harvests have ended. … Many areas where cases are spiking are in non-agricultural counties, such as Broward, Duval, and Hillsborough, which have seen their highest positive case days in over a month. The Florida Department of Health has not communicated to our department any specific concerns about agriculture and COVID-19. “

After the pandemic hit the state in March, DeSantis issued an executive order that generally directed residents to stay at home throughout most of April. President Donald Trump on April 16 issued “Opening Up America Again” guidelines, a three-phase approach to bringing the economy back online after many businesses were shut down or dramatically scaled back to prevent the spread of the disease.

Borrowing from the recommendations, DeSantis authorized the first phase of a reopening plan in early May. That included approving hospitals and ambulatory surgical centers to reopen for surgeries and other medical procedures and authorizing the reopening of other businesses. DeSantis followed with a second phase of the reopening plan June 5.

Governor says state is not shutting down as coronavirus cases rise

Saying society needs to "function," Gov. Ron DeSantis vowed Tuesday to keep Florida open despite a recent surge in the number of people infected with COVID-19.

Since DeSantis authorized the second phase, the state has seen large increases in reported cases of COVID-19, the respiratory disease caused by the coronavirus.

Fried said the governor’s refusal to acknowledge what she called “alarming patterns” is “not only arrogant but will cost lives, public health, and our economy.”

In a statewide phone call with hospital industry officials Tuesday, Florida Surgeon General Scott Rivkees followed DeSantis’ lead and attributed an increased percentage in positive test results to “going into areas where we anticipate that there may be more individuals with COVID-19.”

Rivkees also said mitigation continues to be the best way to slow down the spread of COVID-19 and that hand washing,  maintaining at least six feet between people and wearing face masks are basic mitigation efforts that will help slow the spread of the disease.