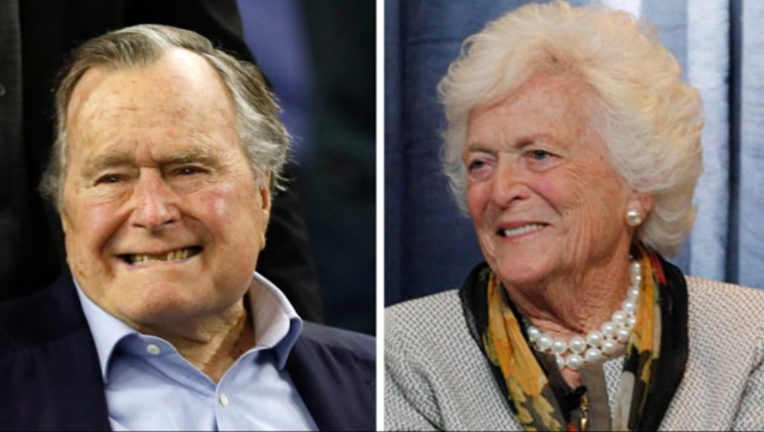 Two years later they were married. Now 73 years later, they are the longest-married couple in presidential history.

With her former president husband still at her side, former first lady Barbara Bush has decided to decline further medical treatment for health problems and focus instead on "comfort care" at their home in Houston.

Family spokesman Jim McGrath disclosed Barbara Bush's decision Sunday. The 92-year-old had been in the hospital recently for congestive heart failure and chronic obstructive pulmonary disease. She had heart valve replacement surgery in 2009 and a long history of treatment for Graves' disease, a thyroid condition.

The former president "still says, 'I love you Barbie' every night," Hager said on NBC's Today, where she works. They had six children, including Hager's father, former president George W. Bush, making Barbara Bush one of only two first ladies to also be a presidential mother. The other was Abigail Adams, wife of John Adams, the nation's second president, and mother of John Quincy Adams, the sixth president.

George H.W. Bush, 93, has described the mother of their six children as "the mainstay, of course, the parent who was always there to help solve the daily problems and emergencies of teen and preteen life."

In her 1994 memoir, Barbara Bush describes her and her husband as "the two luckiest people in the world, and when all the dust is settled and all the crowds are gone, the things that matter are faith, family and friends. We have been inordinately blessed, and we know that."

The former president was a naval aviator in training when they met.

"I'm not much at recalling what people wear, but that particular occasion stands out in my memory," he says in his autobiography.

The band was playing Glenn Miller tunes and he asked a friend from Rye, New York, if he knew the girl across the room in the green and red holiday dress. The friend introduced him to Barbara Pierce, a publisher's daughter from Rye who was going to school in South Carolina.

The next song was a waltz.

"Since I didn't waltz, we sat the dance out. And several more after that, talking and getting to know each other," George H.W. Bush said. "It was a storybook meeting."

Within eight months, they'd met each other's families, were engaged in August 1943 and married Jan. 6, 1945, four months after Bush was shot down over the Pacific. He'd been the Navy's youngest aviator when he got his wings and carried the name "Barbara" on his Grumman Avenger torpedo bomber.

After the war, he attended Yale and they moved to Texas. Her husband made his mark in the oil business as the couple grew their family and turned to politics, a journey that would take them around the world and into the White House.

"You have given me joy that few men know," George Bush wrote to her, according to a collection of letters published in 1999.

"I have climbed perhaps the highest mountain in the world, but even that cannot hold a candle to being Barbara's husband," he also said.

Photos taken of the couple by The Associated Press over the decades have captured moments of care, such as when Barbara Bush applied sunscreen to the 41st president's nose at a 2015 baseball game between the Houston Astros and Seattle Mariners; and candor, notably after Bush stepped on his wife's toe in 1989 while boarding Air Force One.

A daughter, Robin, died in 1953 of leukemia a few weeks before her 4th birthday.

Barbara Bush has recalled a bout of depression in the mid-1970s.

"Night after night, George held me weeping in his arms while I tried to explain my feelings," she said. "I almost wonder why he didn't leave me."

Just last year, allegations surfaced that Bush, who for more than five years has used a wheelchair for mobility, inappropriately touched more than a half dozen women on their buttocks as they stood next to him to take photos.

Through McGrath, Bush issued repeated apologies "to anyone he has offended."

"George Bush simply does not have it in his heart to knowingly cause anyone distress," McGrath said.

Also last year, they both wound up in the same Houston hospital - the former president with pneumonia; his wife with bronchitis.

In 2013, she told C-SPAN in an interview that they pray aloud each night "and sometimes we fight over whose turn it is."

In the same conversation, she said she didn't fear death for herself or "my precious George."

"I know there is a great God, and I'm not worried," she said.