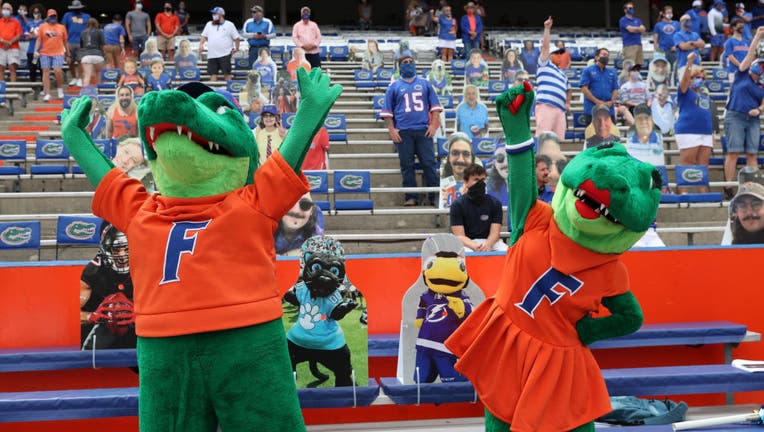 GAINESVILLE, FL - OCTOBER 3: Albert and Alberta of the Florida Gators cheer on the team during the game against the South Carolina Gamecocks on October 3, 2020 at Ben Hill Griffin Stadium in Gainesville, Florida. (Photo by Tim Casey/Collegiate Images

LAKE MARY, Fla. - The University of Florida says that five positive COVID-19 cases have been reported among football players.

The No. 10 Florida Gators are pausing team activities and Saturday’s game against LSU could be canceled as a result of the new cases.

"The University of Florida football team has experienced an increase in positive COVID tests among players this week. Out of an abundance of caution, team activities are paused as of Tuesday afternoon," said Athletics Director Scott Stricklin in a statement.

Coach Dan Mullen has been in communication with football players and their parents, Stricklin added.

"I have had conversations with the Southeastern Conference office, last week's opponent Texas A&M, and this week's opponent LSU,"  Stricklin said. "These circumstances will be re-evaluated by UF Health and the athletic department's sports medicine staff Wednesday."

The move comes three days after Mullen's comments about wanting to fill The Swamp on Saturday to create a better home-field advantage against the Tigers.

Mullen was given several more chances Monday to clarify any confusion regarding his comments about wanting to pack 90,000 screaming fans inside Florida Field during the coronavirus pandemic. He declined each of them, brushing aside criticism

The move comes three days after Mullen's eyebrow-raising comments about wanting 90,000 fans at Florida Field to create a better home-field advantage against the Tigers. Mullen didn't double down Monday, but he didn't back down, either.

The Southeastern Conference already has postponed one game this week due to COVID-19 concerns: Vanderbilt and Missouri. It was the 28th game in the Football Bowl Subdivision to be postponed or canceled since Aug. 26.