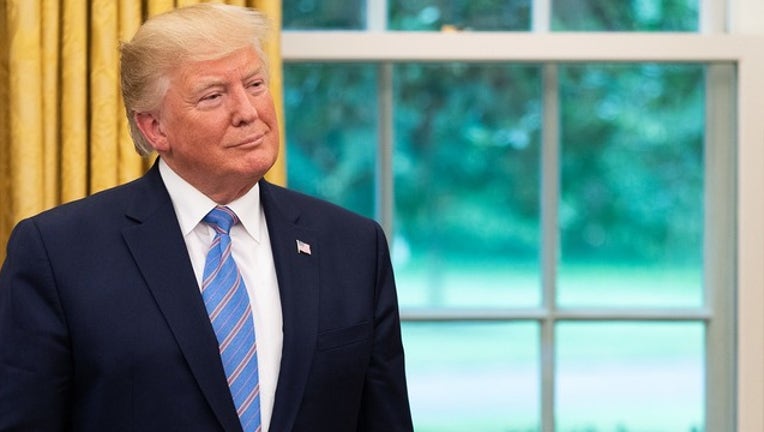 FOX NEWS - More voters rate the economy positively today than they have since 2001, according to the latest Fox News Poll.

In addition, approval of the job President Trump is doing on the economy stands at 52 percent (41 percent disapprove). That's just one-point off his high of 53 percent last summer, and up from 48-46 percent in May.

That job rating is helped, in part, by the 51 percent of voters now feeling the economy is in positive shape (excellent or good).  The last time this many felt that way was almost two decades ago (59 percent, January 2001).

In general, voters think Republicans would do a better job handling national security (+10 points) and the economy (+7).  They give Democrats the advantage on race relations (+23 points), bringing the country together (+15), health care (+14), and immigration (+5).  It's mostly a draw on some issues that historically fall in the GOP column, such as on foreign policy (D+4), border security (R+3), the federal budget deficit (R+3), and taxes (even).

The president's lowest marks are on race relations (32-57 percent), where more voters disapprove than approve by 25 points.  He was underwater by 22 points in October 2018 (35-57 percent).

Over half, 57 percent, don't believe Trump respects racial minorities, including 73 percent of non-whites.

Majorities think that Trump went too far in tweets criticizing four minority Democratic Congresswomen, and believe telling a person of color to go back to the country they came from is a racist thing to say.

Thirty-three percent of Republicans join 88 percent of Democrats in saying the tweets crossed the line.  Some key electoral groups agree: 73 percent of suburban women, 68 percent of independents, and 64 percent of voters living in close counties (where Hillary Clinton and Trump were within 10 points in 2016).

A 53 percent majority of Republicans calls the tweets an acceptable political attack.  GOP men (59 percent) are more likely than GOP women (48 percent) to find them acceptable.

Black voters (79 percent), Democrats (88 percent), and Democratic women in particular (91 percent) are among those most likely to believe the tweets went too far.

Overall, 56 percent think it is racist to say "go back" to a person of color, while 23 percent disagree, and 18 percent say it depends.

Most Democrats (85 percent) and blacks (76 percent), over half of independents (57 percent), and half of whites (50 percent) say the "go back" language is racist.

Among Republicans, 21 percent feel it is racist, while more than twice that number disagree (45 percent), and 30 percent say it depends.

One of the Congresswomen of the so-called "Squad" the president criticized, Alexandria Ocasio-Cortez (D-NY), is almost as well-known to voters nationally as long-time congressional leaders.  For example, 9 percent have never heard of Senate Majority Leader Mitch McConnell, while 12 percent are unfamiliar with Ocasio-Cortez.  Only three percent have never heard of House Speaker Nancy Pelosi.

Ocasio-Cortez and Pelosi are about equally popular among Democrats: Pelosi rates more positively than negatively by 41 points and Ocasio-Cortez by 39.  For comparison, McConnell receives a net positive by 9 points among Republicans.

A majority of voters has an unfavorable view of Trump:  45 percent favorable vs. 51 percent unfavorable.  Among Republicans, his favorable rating hits 87 percent.

Ocasio-Cortez is underwater among all voters by 7 points (34 favorable - 41 unfavorable), driven by 68 percent of Republicans rating her negatively.

Six in 10 voters are concerned about the treatment of migrants detained on the U.S.-Mexico border, including 31 percent who feel "extremely" concerned.  Most Democrats (82 percent) are concerned, while a majority of Republicans (58 percent) is not.

Fox News Channel's Chief White House correspondent John Roberts reports the White House announced Tuesday that between May 13 to July 11, the U.S. Immigration and Customs Enforcement agency (ICE) arrested more than 900 people who had remained in the country despite being ordered to leave.

Conducted July 21-23, 2019 under the joint direction of Beacon Research (D) and Shaw & Company (R), this Fox News Poll includes interviews with 1,004 randomly chosen registered voters nationwide who spoke with live interviewers on both landlines and cellphones.  The poll has a margin of sampling error of plus or minus three percentage points for all registered voters.