Orlando International Airport is undergoing a massive expansion. FOX 35 News got an exclusive tour of the construction site of the South Terminal, also known as Terminal C.

The airport took FOX 35 News on an exclusive tour of the construction site.

The new terminal is expected to be an airport of the future.

A spacious environment, windows all around, decorated with palm trees, fine and digital art.

“It definitely has more amenities down here on the south terminal, more experiential media, has a different baggage system,” Ruohomaki said. 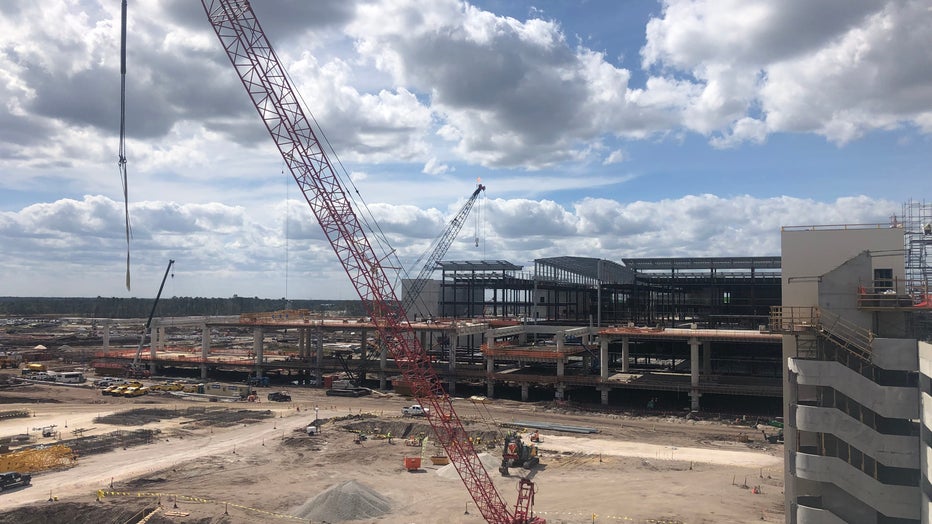 Unlike the existing terminal, where passengers have to go downstairs to baggage claim, in the new terminal, bags will be transported upstairs to meet passengers getting off their flights on the upper levels.

Terminal C is being built just south of the existing terminals A & B, which are packed with travelers.

In fact, airport officials say those terminals are at double capacity.

The new terminal adds 19 gates and up to 27 planes, carrying more than 10 million passengers a year.

“It will help relieve capacity off the north terminal and help get us back to better service levels,” Ruohomaki said.

Crews are also in the process of pouring 5 million square feet of cement on the taxiways at a thickness of about 25 inches to handle the weight of the aircrafts.

The south terminal is part of a much larger master plan, which entails finishing a second phase of Terminal C and the future Terminal D. The long-term plan ultimately adds 120 gates, doubling the size of MCO as we know it.

“Where this goes? I think that maybe we rival Atlanta one day,” Ruohomaki said.