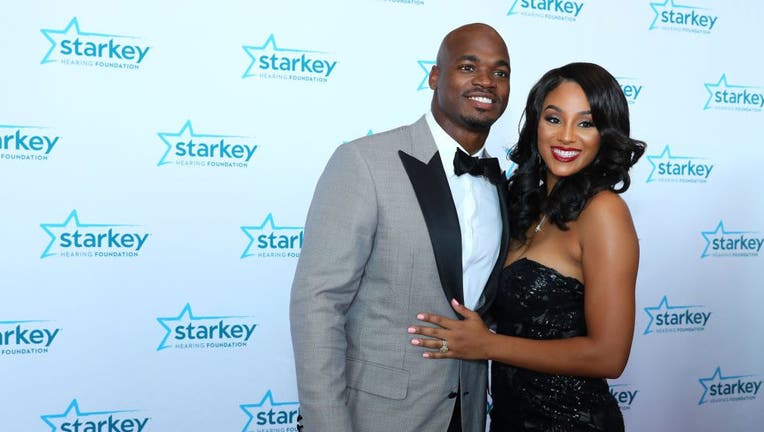 ST PAUL, MN - JULY 16: Adrian Peterson and Ashley Brown walk the red carpet at the 2017 Starkey Hearing Foundation So the World May Hear Awards Gala at the Saint Paul RiverCentre on July 16, 2017 in St. Paul, Minnesota. (Photo by Adam Bettcher/Getty

LOS ANGELES - Former NFL MVP Adrian Peterson -- who was arrested for alleged domestic violence at Los Angeles International Airport in February -- has agreed to complete 20 sessions of domestic violence and alcohol counseling within the next six months, a spokesman for the Los Angeles City Attorney's Office said Monday.

The Los Angeles County District Attorney's Office opted in February not to file a felony case against Peterson and instead referred the matter to the City Attorney's Office to determine if a misdemeanor case is warranted.

Rob Wilcox with the City Attorney's Office said a "pre-filing City Attorney hearing, as an alternative to prosecution, was held on Friday."

Peterson was arrested Feb. 13 at Los Angeles International Airport after an alleged domestic violence incident on board a jet that prompted a department flight to return to LAX.

At about 8:30 a.m. that day, Los Angeles Airport police responded to the alleged verbal and physical altercation between a man and a woman, according to a statement released by the airport police.

Peterson was taken into custody and booked at the Los Angeles Police Department's Pacific Division for alleged corporal injury of a spouse.

"On Sunday, Adrian and I had a verbal argument. Unfortunately, it was on an airplane," she wrote. "At no point did Adrian hit or strike me. This is a private matter between my husband and myself. We ask that everyone respect our privacy so we can focus on what matters most: our children."