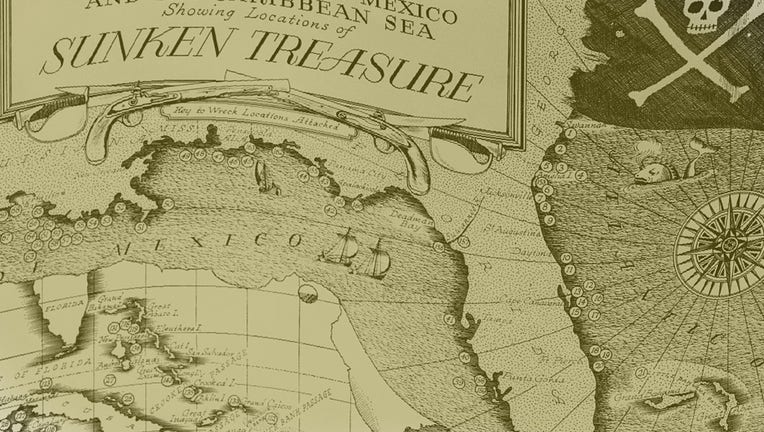 Photo shows a section of the Florida-Caribbean map. In lower left, an insert section shows part of the Caribbean treasure ground. Note heavy concentration of numbers (each location a shipwreck) off the Louisiana coast, and in the Florida Keys. [GETTY

LAKE MARY, Fla. - A Florida teenager recently made a spectacular find while on an ocean dive: a rare gold coin believed to be from the 1715 Spanish Treasure Fleet.

Nick Amelio, 17, of Vero Beach, was treasure salvaging near Corrigan's shipwreck in early August when he made the discovery, TCPalm.com reports.

"I made a find of a lifetime while out treasure hunting on the 1715 fleet! After finding small pieces of gold flower chain from the shipwreck, I managed to find a beautiful Mexico City gold 2 escudo," Amelio wrote in a Facebook post with pictures of the find.  "Incredibly grateful to be a part of this crew this year."

He also a posted video on his TikTok account of the dive.

"I thought my crew was pranking me because it was so crazy," he told TCPalm.com.

In the summer of 1715, the Treasure Fleet was returning to Spain from Cuba when 11 of its 12 ships were lost in a hurricane off the Florida Coast.  The wreckage sites of the ships can be found on the ocean floor just off Indian River and St. Lucie counties, hence the name "Treasure Coast."

Amelio called his discovery the "Holy Grail" of all his finds.

"This is definitely my best find yet," he said of the approximately 300-year-old, solid gold coin.