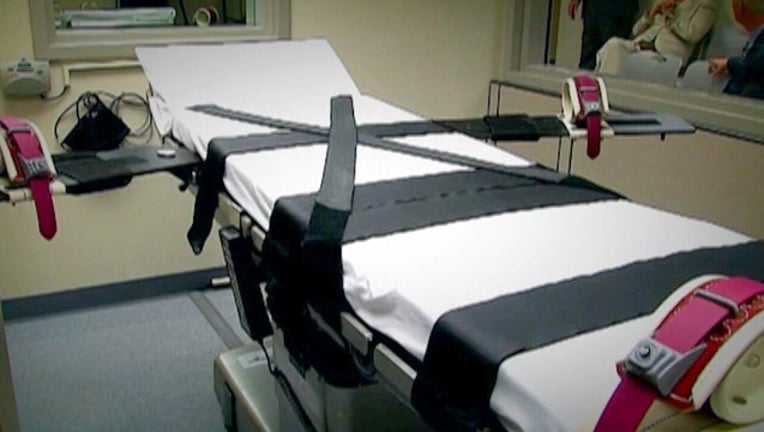 TALLAHASSEE (NSF) - Florida's death penalty hiatus is slated to end Thursday, when the state plans to execute the first Death Row prisoner in more than 19 months.

But the execution of Mark James Asay --- a white supremacist accused of targeting black victims --- won't just be the first lethal injection since early 2016 in a state that was killing Death Row prisoners at a record-breaking pace until a U.S. Supreme Court ruling effectively put Florida's death penalty on hold.

It will also be the first execution anywhere in the country using an untested triple-drug lethal injection procedure.

Asay has spent nearly three decades on Death Row after being convicted in the 1987 shooting deaths of two men in downtown Jacksonville.

But not long afterward, in a case known as Hurst v. Florida, the U.S. Supreme Court struck down the state's death-penalty sentencing system as unconstitutional because it gave too much power to judges, instead of juries.

Lawmakers revamped the law, but a series of court rulings kept the death penalty in limbo until this spring, when the Florida Supreme Court lifted a hold on Asay's execution, more than a year after it was supposed to take place.

It's not unusual for Death Row prisoners, especially those with pending death warrants, to launch myriad appeals in one of the judicial system's most complicated arenas.

But Asay's case is even more tangled than most:

--- Asay, now 53, spent a decade on Death Row without legal representation, a violation of state law.

--- Dozens of boxes of records related to his case were destroyed after being left in a rat- and roach-infested shed.

--- One of his previous defense lawyers was the subject of an investigation by the Florida Supreme Court, after a federal judge chided her for shoddy work.

--- Asay's current lawyer maintains that Attorney General Pam Bondi's office hoodwinked him into agreeing to a delay by the U.S. Supreme Court, which could ultimately make it more difficult for the condemned killer to have a review by the high court.

--- The Florida Supreme Court recently issued a rare mea culpa, acknowledging that it had for more than 20 years mistakenly believed that one of the convicted murderer's victims was black.

--- Florida Department of Corrections officials changed the three-drug lethal injection protocol a year after Scott signed Asay's death warrant, adopting the use of a drug never before used in Florida or in any other state for executions.

Asay was convicted in 1988 of the murders of Robert Booker and Robert McDowell. Asay allegedly shot Booker, who was black, after calling him a racial epithet. He then killed McDowell, who was dressed as a woman, after agreeing to pay him for oral sex. According to court documents, Asay --- who bears white supremacist and swastika tattoos --- later told a friend that McDowell had previously cheated him out of money in a drug deal.

A jury found Asay guilty of two counts of first-degree murder and recommended the death penalty with a 9-3 vote.

The Florida Supreme Court last week rejected a major appeal by Asay, including a challenge to the new lethal-injection procedure. This week, the court rejected another attempt at a reprieve, after justices acknowledged the court had been mistaken for more than two decades about McDowell's race.

Thursday's execution would make Asay the 24th Death Row prisoner put to death since Scott --- who has ordered more executions than any Florida governor since the death penalty was reinstated in 1976 --- took office in 2011.

The number of death warrants signed by Scott, during a shorter period of time than other governors, was steadily growing until the Hurst decision put executions on hold.

While death penalty lawyers don't wish for any complications Thursday, they worry that an uneventful lethal injection could prompt Scott to issue a flurry of new death warrants.

“The attention focused on this execution happens as a result of the lack of state sponsored killings in the last year and a half. I suspect the execution machine will start up again, these judicially approved medical homicides will become the norm again, and news about them will move to the back pages, if they make the paper at all,” Pete Mills, an assistant public defender in the 10th Judicial Circuit who also serves as chairman of the Florida Public Defenders Association Death Penalty Steering Committee, said in an interview.

Ocala-area State Attorney Brad King, a veteran prosecutor and outspoken defender of the death penalty, wouldn't predict what the impact of Thursday's execution would be in terms of Scott.

But “if this execution is carried out without any problems, without any stays by any appellate courts, then I think the road would be clear for executions to begin on a regular basis again,” King told The News Service of Florida in a telephone interview Tuesday.

Florida Supreme Court Justice Barbara Pariente, who dissented in last week's ruling on Asay's appeal, raised concerns that the execution is being rushed. She wrote, in part, that the state had thwarted attempts by Asay's lawyers, led by Marty McClain, to obtain public records regarding the change in the lethal injection protocol.

“In its rush to execute Asay, the state has jeopardized Asay's fundamental constitutional rights and treated him as the proverbial guinea pig of its newest lethal injection protocol,” she wrote in a lengthy dissent on Aug. 14.

“If the state is going to kill someone on behalf of the people of that state, I would hope they would take the time to get things done right,” Mills said.

But Asay has had “multiple trips through the appellate system,” the veteran prosecutor King said.

“There's nothing rushed about it,” King said.