Shocking new footage shows the moment Texas troopers and Border Patrol agents rescued a woman who had been smuggled across the border, and was trapped in a duffel bag, from a burning car.

Agents had started the pursuit of a human smuggler on March 24 near Laredo, Texas. The pursuit was soon joined by the Texas Department of Public Safety (DPS).

The smuggler crashed the car, which immediately caught on fire, and bailed out of the car.

RELATED: COVID-19 asylum limits at US-Mexico border to end May 23

He was then immediately apprehended by troopers, and told them that there was a woman who had been smuggled in the back of the car. She was zipped up in a duffel bag.

"She's in the bag," the smuggler said in footage from one of the officer's bodycams. 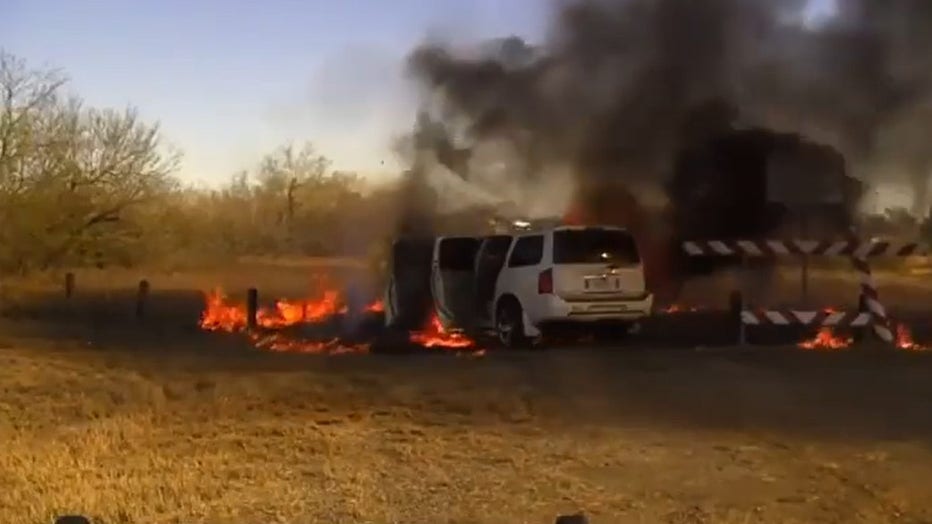 A trooper immediately broke open the window, pulled out the bag, and rescued the woman trapped inside, saving her from the inferno.

"Holy cr-p," one agent can be heard saying after the rescue.

In a statement to FOX News, TSA confirms reports of arrest warrants that were issued for illegal immigration charges are used for ID to fly. The people that broke immigration laws will then receive additional screening, and their DHS documents are validated by cross checking CBP databases.

The number of migrants coming across the border has remained high throughout 2021 and into 2022. There were more than 164,000 migrants encounters in February and that number is expected to have risen in the month of March ahead of an expected surge this summer. Those numbers do not include the number of migrants who got past agents.