Disney has announced capacity will be increased to 35 percent at its Florida parks while the California parks will remain closed.

LAKE MARY, Fla. - Entertainment giant Disney has announced it will increase capacity at its Florida parks to 35% while its California parks will remain closed at least until January 2021 due to the coronavirus pandemic.

The news came after Disney reported an adjusted loss of 20 cents per share for the fourth quarter, much smaller than Wall Street analysts expected, according to Refinitiv data. The company generated $14.71 billion in quarterly revenue, surpassing a projected $14.20 billion.

Disney shares rose more than 5% in after-hours trading as Wall Street reacted to the better-than-expected numbers.  Analysts anticipated that Disney would report a loss closer to 68 cents a share from a year ago.

The company noted that its parks, experience and product segment had suffered the “most significant impact” from the pandemic due to lengthy closures and limited operations. Disney was also forced to make significant adjustments to its slate of upcoming movie and television releases.  Capacity at the Florida parks was set at 25% upon reopening over the summer after being closed for weeks due to the pandemic.

Disney executives expressed optimism about the reopenings of the Florida parks and expect more visitors in the next quarter, adding that reservations for the Thanksgiving holiday are almost all booked up. 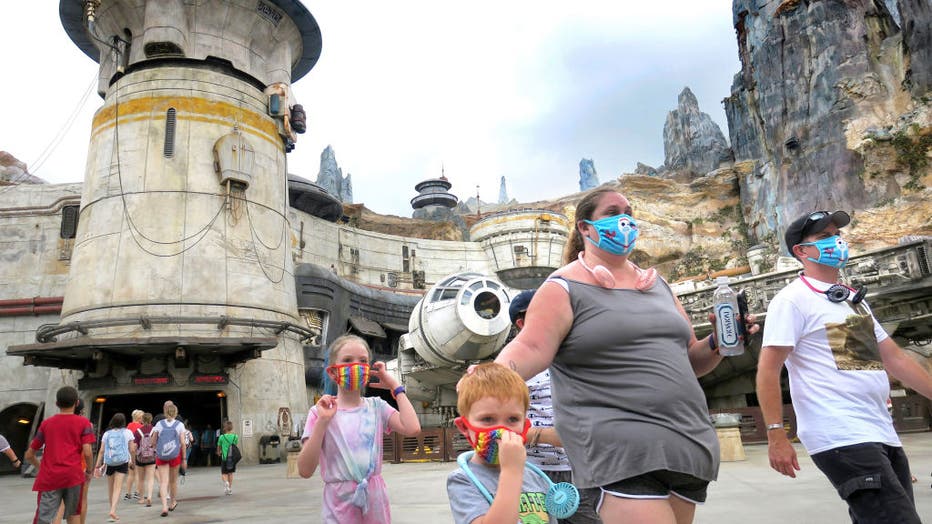 Guests walk past the Millennium Falcon in the Star Wars: Galaxy's Edge attraction on the second day of the re-opening of Disney's Hollywood Studios at Walt Disney World, in Lake Buena Vista, Florida, on Thursday, July 16, 2020. All four of Disney's F

During an earnings call, Disney’s CEO Bob Chapek said he was disappointed in the State of California for not allowing parks to reopen.

“Our park operators, which as you know are the best in the world, are becoming much more efficient in operating under COVID guidelines, and we’ve been able to pretty materially increase our capacity and still stay within the guidelines local governments are giving us," Chapek said.

Disney+, which costs $6.99 per month for its most basic package, has amassed more than 73 million paid subscribers in the year since its launch, company executives said in an earnings release. Disney was already making heavy investments in Disney+ and sister service ESPN+ prior to the pandemic, which has triggered a surge in digital viewership.

“We’ve been able to effectively manage our businesses while also taking bold, deliberate steps to position our company for greater long-term growth,” Chapek said. “The real bright spot has been our direct-to-consumer business, which is key to the future of our company, and on this anniversary of the launch of Disney+ we’re pleased to report that, as of the end of the fourth quarter, the service had more than 73 million paid subscribers – far surpassing our expectations in just its first year.”

Still, Disney is taking steps to protect its balance sheet amid the pandemic by disclosing plans to not declare a semi-annual cash dividend for the second half of fiscal 2020.

There was no mention of the massive layoffs of Disney employees across the company.