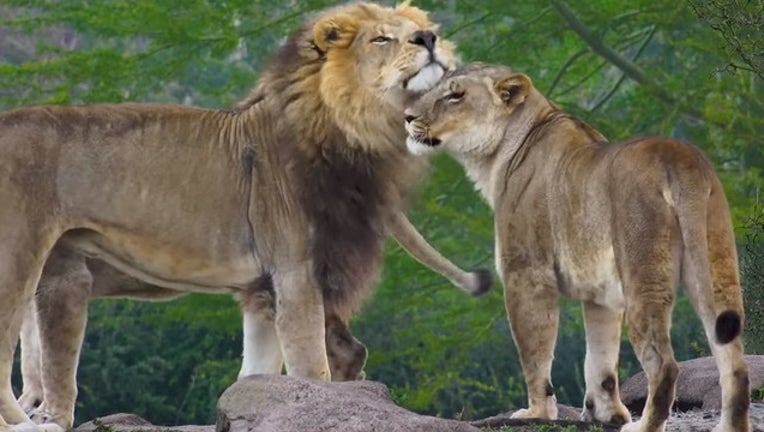 ORLANDO, Fla. (FOX 35 ORLANDO) - To celebrate the release of the computer-animated remake of 'The Lion King,' Disney Parks Blog is giving animal lovers a look at their real-life pride of lions.

The blog posted video of the lions that reside at Disney's Animal Kingdom: Dakari, Kinsey, and Kamari.

Dakari is the sole male lion. Although he is the largest of the group, Disney's animal experts say that he is the most gentle. He also enjoys spending his days in the shade

Kinsey and Kamari are sisters.

Kamari is the larger of the two and has a darker face. Kinsey is more of a golden color with spots on her legs and is more reserved.

According to Disney's animal experts, lions like to sleep up to 20 hours a day. Your best chance of seeing the pride is in the morning or evening on the Kilimanjaro Safaris at Disney’s Animal Kingdom.

For guests who visit the ride during the opening week of 'The Lion King," they'll be helping save lions in Africa.

"For every guest who rides the Kilimanjaro Safaris at Disney’s Animal Kingdom in Florida during opening week of “The Lion King” film (July 19 – 25, 2019), the Disney Conservation Fund will donate $2 (up to $350,000) to the Wildlife Conservation Network’s Lion Recovery Fund to help double the number of lions across Africa by 2050."