Delays reported with Star Wars: Rise of the Resistance

Crowds waited for hours to experience Star Wars: Ride of the Resistance. Several park guests reported ride errors, with some even having to exit the attraction mid-ride.

Unfortunately, many riders will have to come back another day after several tweeted that all passes for the opening had been distributed. Several of the guests that had an opportunity to board the ride reported delays and errors, with some even having to exit the attraction mid-ride.

RELATED: Inside ‘Star Wars: Rise of the Resistance’: The queue, ride video, and more

The excitement started on Thursday morning, as excited Star Wars fanatics posted photos and videos to social media of the crowds gathering. 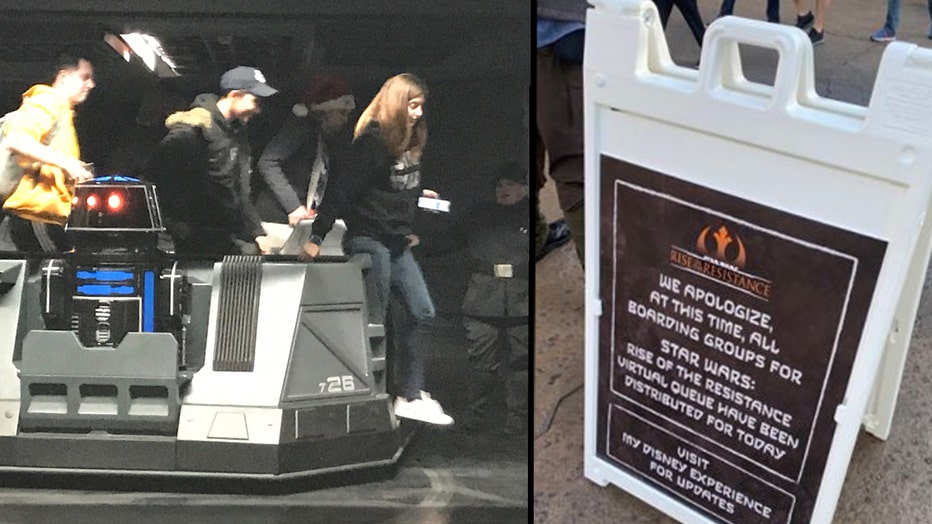 "#RiseOfTheResistance was AMAZING!" wrote Kevin Graham. "Best ride I’ve ever been on anywhere.  This deserves a park to itself. Soooooo good!  Thank you #Disney #StarWars you went to the stars and back with this one!"

Getting to ride the attraction hit a snag when parkgoers took to social media to report that the ride was experiencing delays.

Many riders posted photos of a return ticket they said was issued to them which would allow them to come back to the attraction later in the day.

"At 7:05am we were evac from #RiseOfTheResistance We were given this paper return for Rise and a digital for another ride," Twitter user Kennythepirate.com tweeted.

Then, some of those who actually got on the ride had to be escorted off due to ride errors. For example, Matt Harrington, who came to the parks from Nebraska, was on the ride when it stopped and the lights came on.

“They came around, unlocked our vehicle, so that we could get out and then exited us through the back stairwells and hallways, so that we got off the ride,” Harrington said. However, he expected issues on opening day. "It's part of the experience of coming on day one, is just the bugs and the kinks.”

Star Wars: Rise of the Resistance opened on Thursday at Disney's Hollywood Studios.

Parks guests tweeted from the ride after issues appeared to be fixed. However, Twitter user David Heller posted a photo saying that the ride was full for the day.

The sign read, "We apologize, at this time, all boarding groups for Star Wars: Rise of the Resistance virtual queue have been distributed for the day."

The ride, which Walt Disney World describes as a "harrowing adventure" that will "blur the lines between fantasy and reality," will place riders in the middle of a battle between the 'Resistance' and the 'First Order' after taking off from Batuu in a transport ship. They receive orders from Rey and droid BB-8 to welcome new Resistance recruits and reunited with General Leia Organa at an off-planet location. While on the way, riders are captured by a First Order Star Destroyer. With the help of some heroes from the Resistance, they must seek to escape Kylo Ren and the First Order.

"Star Wars: Rise of the Resistance is overwhelmingly popular and guests have been enjoying it since early this morning. Virtual queue has been working well with guests having fun in other areas of the park rather than waiting in line."

Walt Disney World did not comment or confirm the reported breakdown.