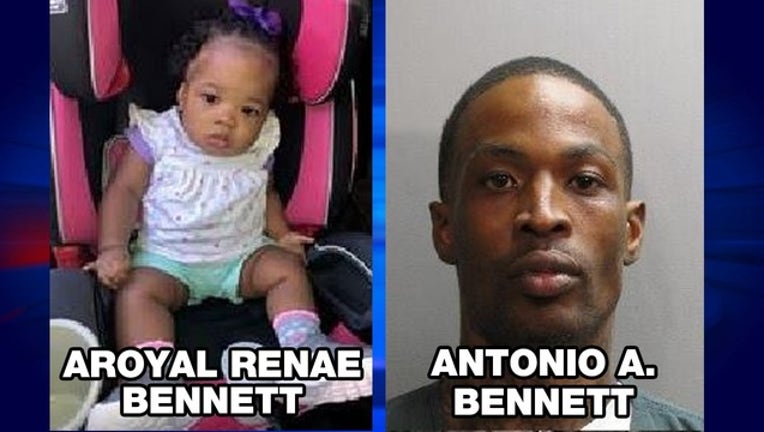 JACKSONVILLE, Fla. (FOX 35 WOFL) - The Jacksonville Sheriff's Office reports that a 7-month-old child and her 29-year-old father are missing.

They say that on Tuesday, May 29th, officers responded to Broward Road in reference to a missing 7-month-old child. The mother of the child reported that she and the father of her child became involved in an altercation that led to him leaving the residence with the child. At this time, the father, Antonio Bennett, has not returned the child, Aroyal Renae Bennett to her mother.

Police also say they discovered that Antonio Bennett is being sought on warrants issued prior to this incident.

The father was last seen wearing a black tank top and light blue shorts and black shoes. He is about 190 pounds and 6'2" with brown eyes and black hair. He was driving a white, 4-door, 2006 Chevy Impala, with Florida tag BYT T53.

Anyone with any information regarding the location of these two is asked to contact the Jacksonville Sheriff's Office at 904-630-0500 or email them at JSOCrimeTips@jaxsheriff.org. To remain anonymous and receive a possible reward up to $3,000, contact Crime Stoppers at 1-866-845-TIPS.

See the Jacksonville Sheriff's Office post on the missing child and father below.