Mayor Keisha Lance Bottoms, rappers T.I. and Killer Mike, Dr. Bernice King, and other address the unrest in Atlanta over the death of George Floyd.

ATLANTA - What started as peaceful demonstrations over the killing of George Floyd, a Minneapolis man who died while in police custody, turned violent Friday evening in Atlanta as people clashed with police, buildings were vandalized and cop cars were set on fire.

According to Atlanta Police, protestors caused extensive damage to patrol vehicles and buildings in the area of Centennial Olympic Park Drive and Marietta Street and looted several businesses in the same area. Several small fires were started, including fire  set to an APD patrol vehicle. 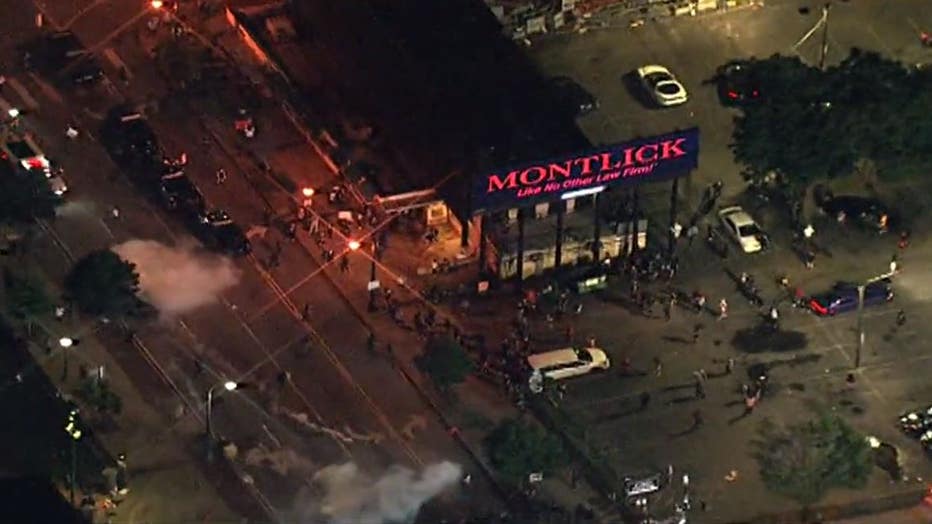 "We have issued disbursement orders and deployed tear gas in an effort to break up the protests. However, officers continue to endure nearly constant assault, including protestors shooting BB guns at them, throwing bricks, bottles, rocks and knives at them as they continue their efforts to protect property and lives. At the moment, at least three officers have been injured in the confrontation and we are aware of multiple arrests," APD said in a statement to FOX 5.

Protesters gathered around 3 p.m. at Centennial Olympic Park, at Park Avenue W NW. A second group of demonstrators gathered about 4 p.m. at the CNN Center, located at 190 Marietta Street NW. 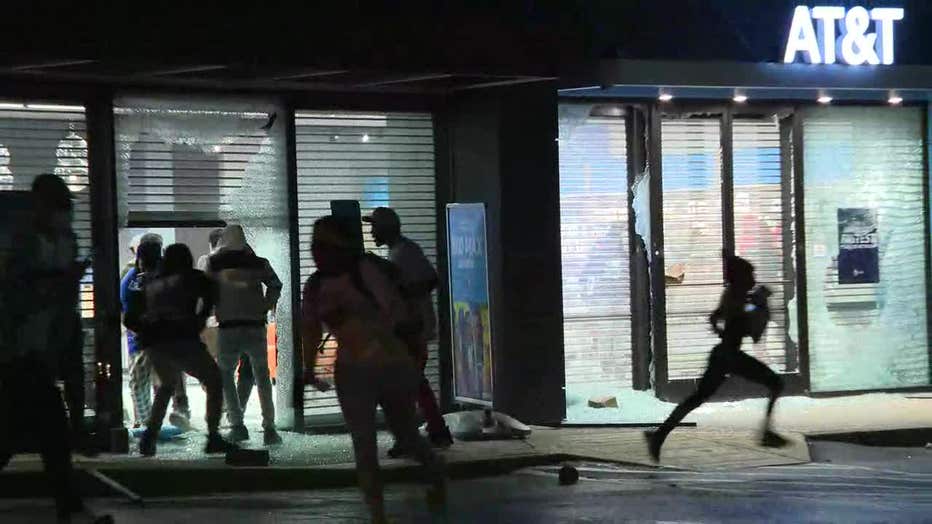 The groups marched to the State Capitol, where they formed one demonstration, before returning to Centennial Olympic Park. The group had intended to go to Atlanta Police Headquarters, located at 226 Peachtree Street SW, but changed plans due to blocked streets. 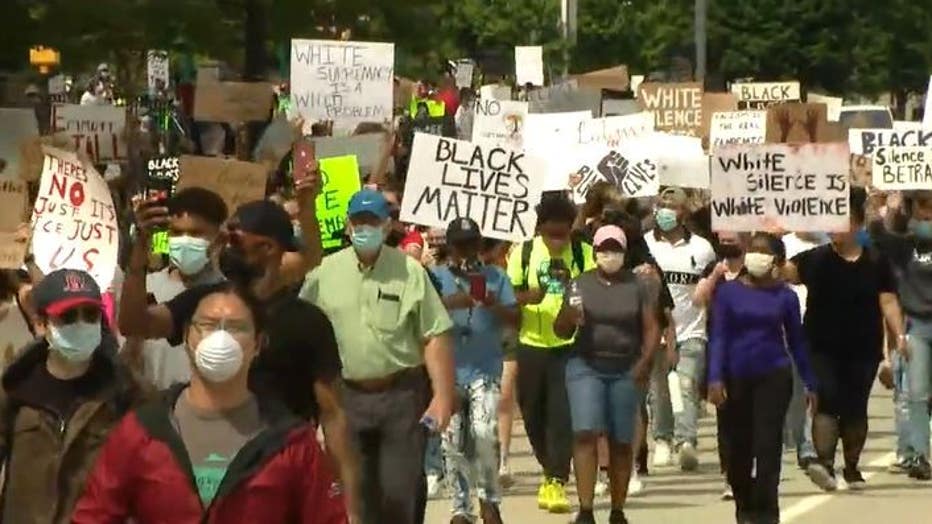 SKYFOX5 flew overhead where demonstrators had taken over the interpass at Centenial Olympic Park Drive and Mitchell Street SW in peaceful protest. Many of the people in the crowd could be seen with signs referrencing Floyd's death, the #BlackLivesMatter movement, and the shooting of Ahmaud Arbery.

While the state has already begun the reopening process, Georgia's governor and state health officials have continued to encourage social distancing. 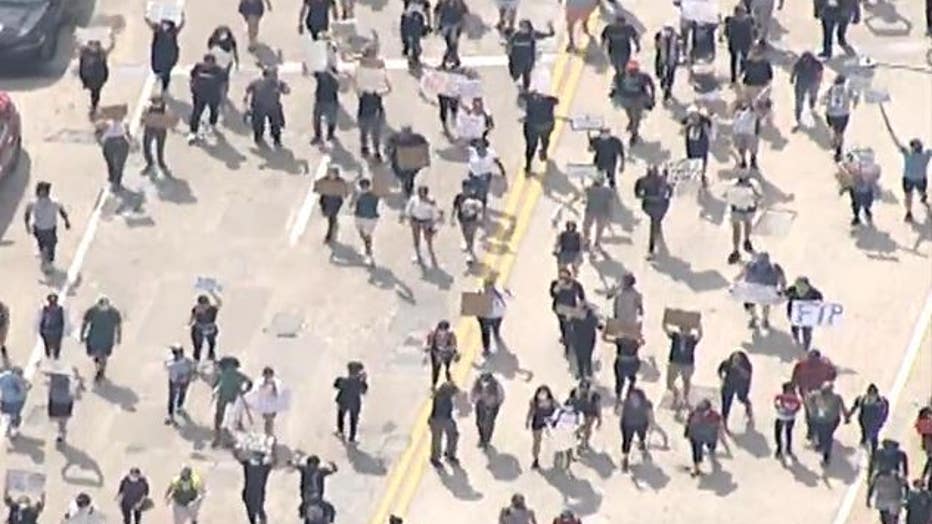 SKYFOX5 flies overhead as demonstrators gather in Downtown Atlanta Friday, May 29, 2020 to protest the death of George Floyd, who was killed by a police officer in Minneapolis.

SKYFOX also captured a disturbance between some of the demonstrators and police by the CNN Center. Aerial footage showed several people being shoved. Pepper spray was used to break up some of the protesters. 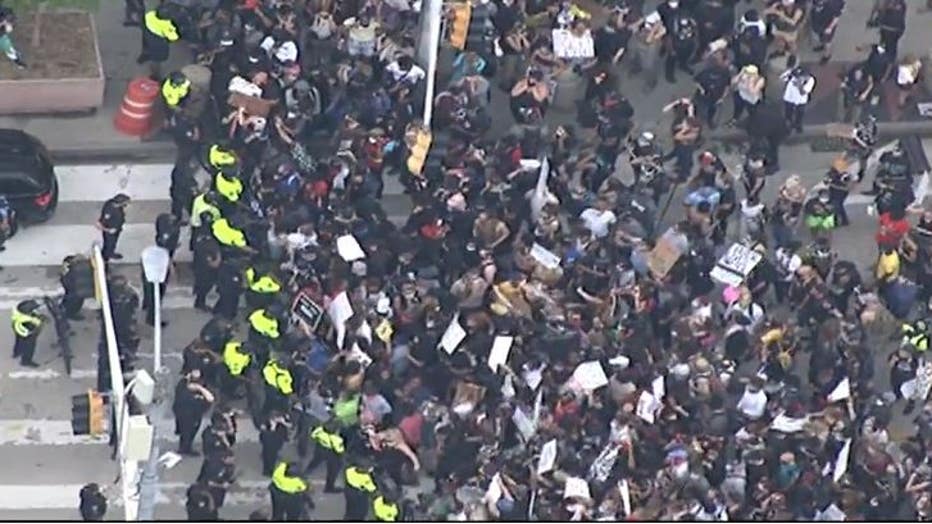 Demonstrators clash with police in Atlanta during a protest of the death of George Floyd Friday May 29, 2020. 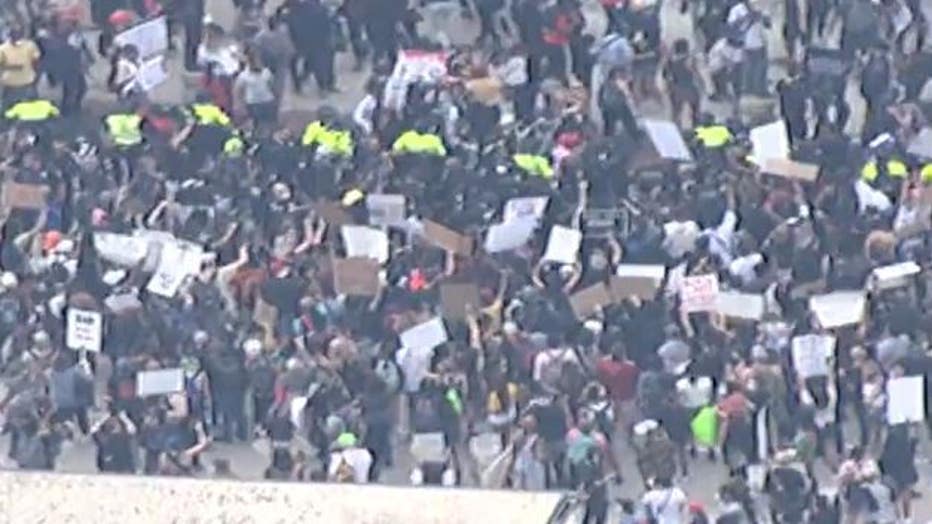 Demonstrators clash with police in Atlanta during a protest of the death of George Floyd Friday May 29, 2020.

At one point, a group of demonstrators surrounded an Atlanta police officer inside his patrol vehicle. Additional officers arrived and began to push protestors back away from the vehicle, which led to a number of scuffles between police and protestors and at least three arrests, according to Atlanta Police. One officer was pushed to the ground and sustained minor injuries. 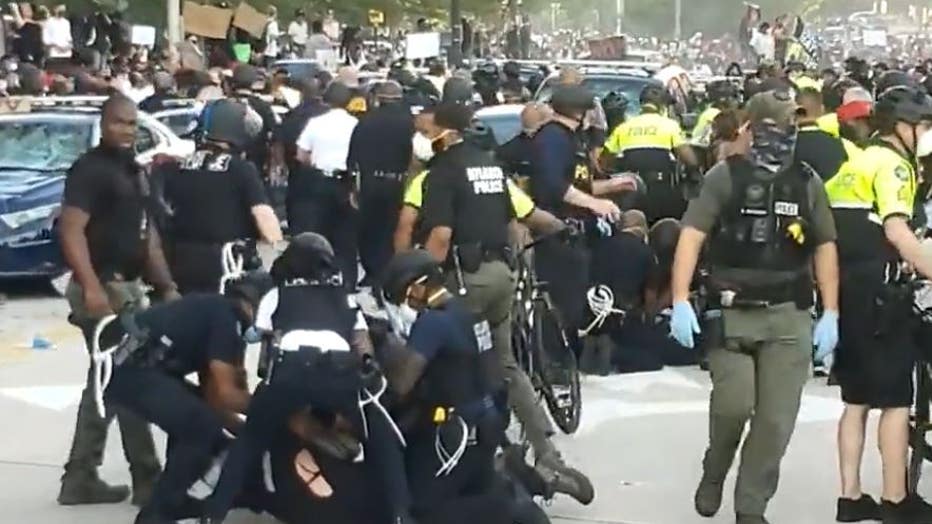 Police said they were attempting to allow the protestors to continue with a peaceful demonstration.

"Officers have been subjected to water bottles, eggs and other items being thrown at them. However we remain hopeful this activity will cease and there will be no need for further arrests or clashes with protestors," APD said in a statement to FOX 5.

The CNN Center suffered signifcant vandalism. Graffiti littered its exterior. A group of people managed to break through one of the front glass doors. 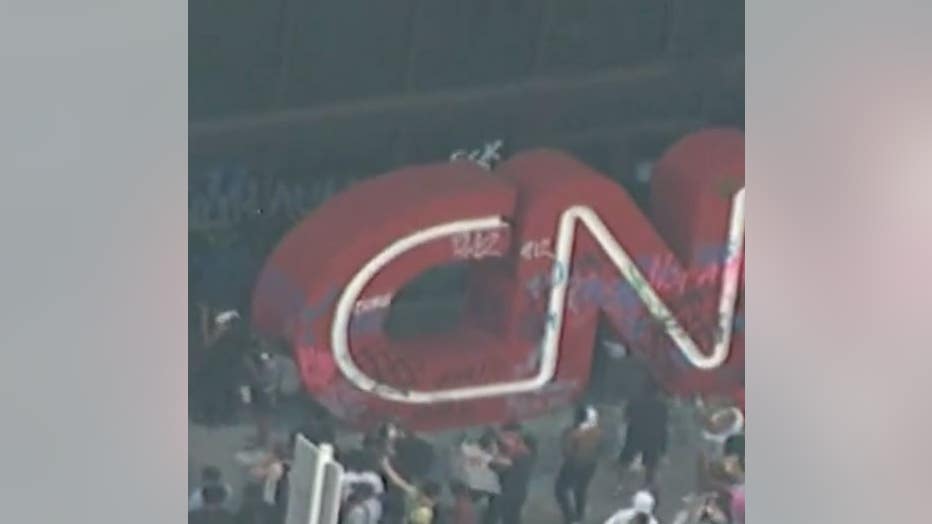 The violence continued in the street as demonstrators turned their attention to police cars in the area, smashing windshields and pounding on the cars. At one point a police vehicle was set on fire. 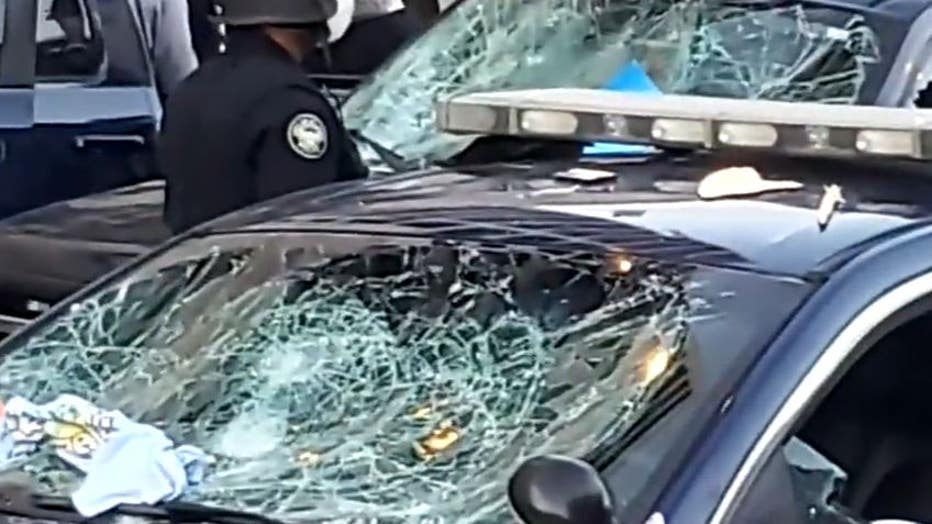 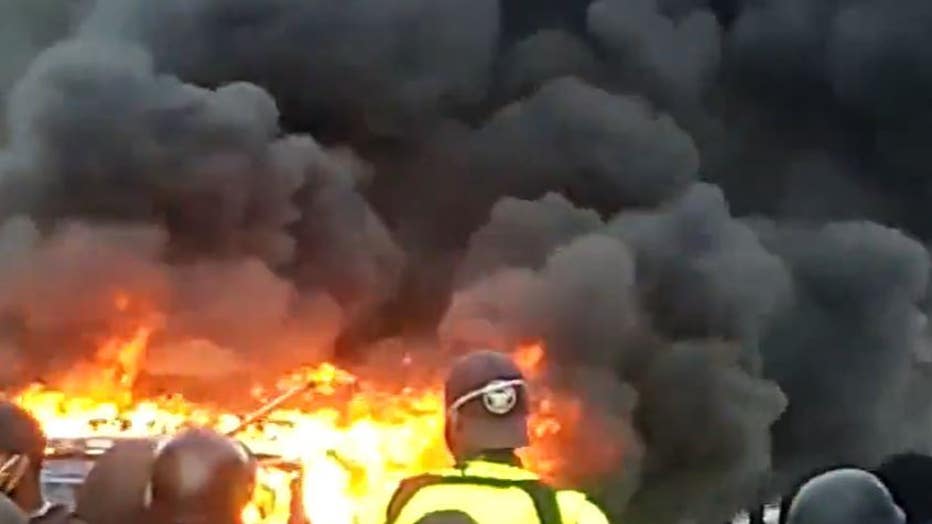 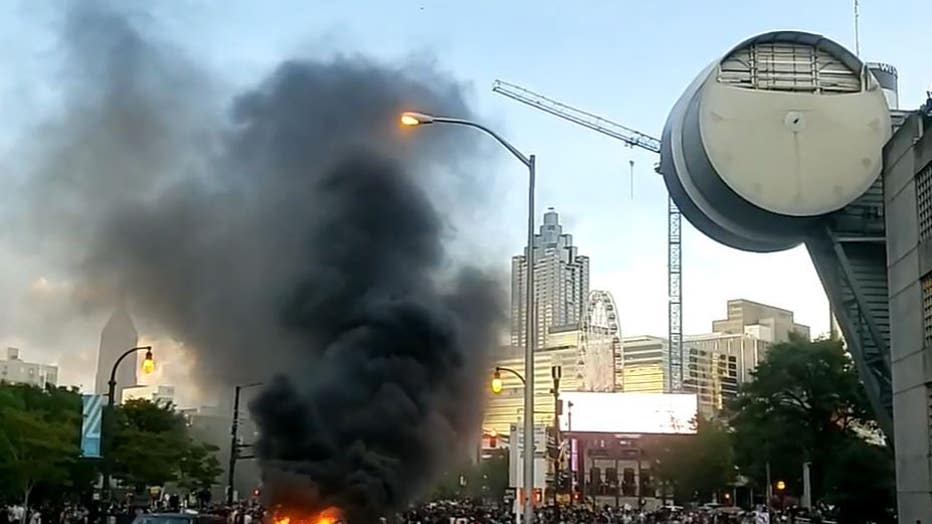 A group of demonstrators broke off from the main group in front of the CNN Center and made their way to the interstate, effectively taking it over and stopping traffic. A heavy police presence responded in return. 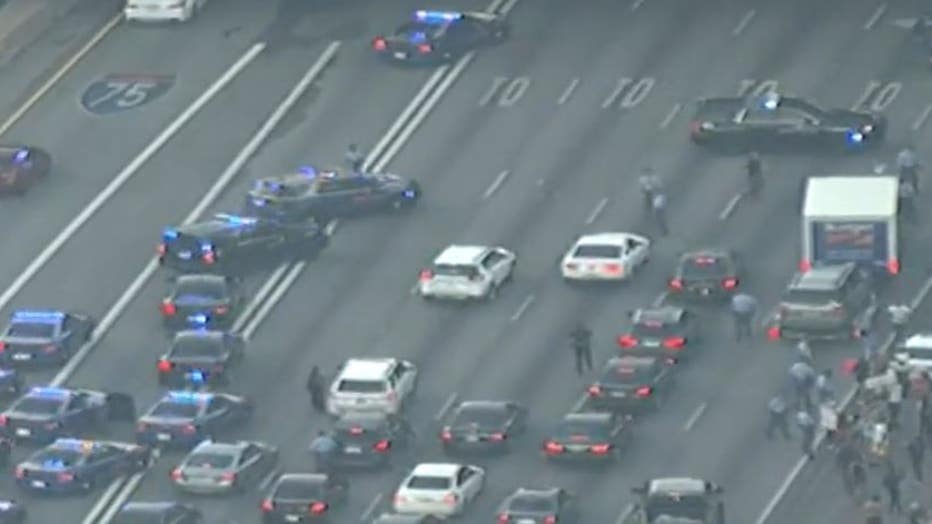 "So what I see happening in the streets of Atlanta is not Atlanta. This is not a protest. This is not in the spirit of Martin Luther King Jr. This is chaos. A protest has purpose," Bottoms said. "If you care about this city then go home."

Atlanta Mayor Keisha Lance Bottoms delivers an emotional speech addressing the unrest in the city over the death of George Floyd in Minneapolis.

Dr. Bernice King, daughter of the late Martin Luther King Jr., addresses the unrest in Atlanta over the death of George Floyd.

Rapper Killer Mike, the son of an Atlanta police officer, addresses the unrest in the city over the death of George Floyd.

"Currently, there are thousands of Georgians gathered in Atlanta to demand justice for George Floyd’s death. It is a powerful moment for our state and country. We encourage protestors to exercise their Constitutional rights safely, especially in light of COVID-19," the governor tweeted Friday evening.

The incident involving Floyd sparked oputrage across wth country after video showed a Minneapolis police officer pressing his knee on Floyd's neck while Floyd said he couldn't breathe. Floyd was pronounced dead at a hospital after being detained by police.

Since the Memorial Day incident, there has been escalating unrest in Minneapolis, St. Paul and surrounding cities. Demonstrations have also taken place in other major U.S. cities.

Hennepin County Attorney Mike Freeman announced charges Friday against Derek Chauvin, one of the officers involved in Floyd's death. He has been charged with third-degree murder and manslaughter. 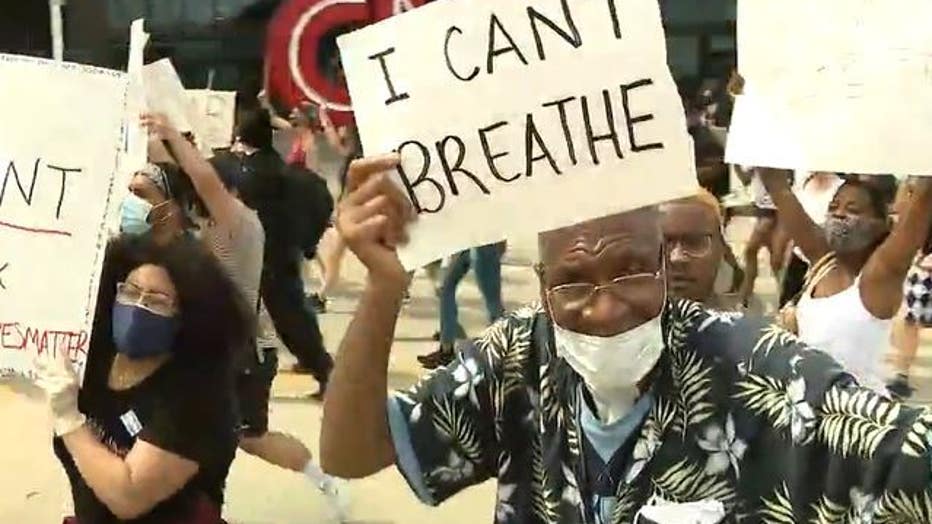 Chauvin was seen in a video kneeling on Floyd’s neck as he repeatedly says “I can’t breathe.” The officer continued to press his knee onto Floyd’s neck even after he lost consciousness. None of the other officers at the scene attempted to check on Floyd until after the ambulance arrived, despite bystanders’ pleas.

Chauvin and three other police officers were fired following the incident. The BCA and FBI are investigating. 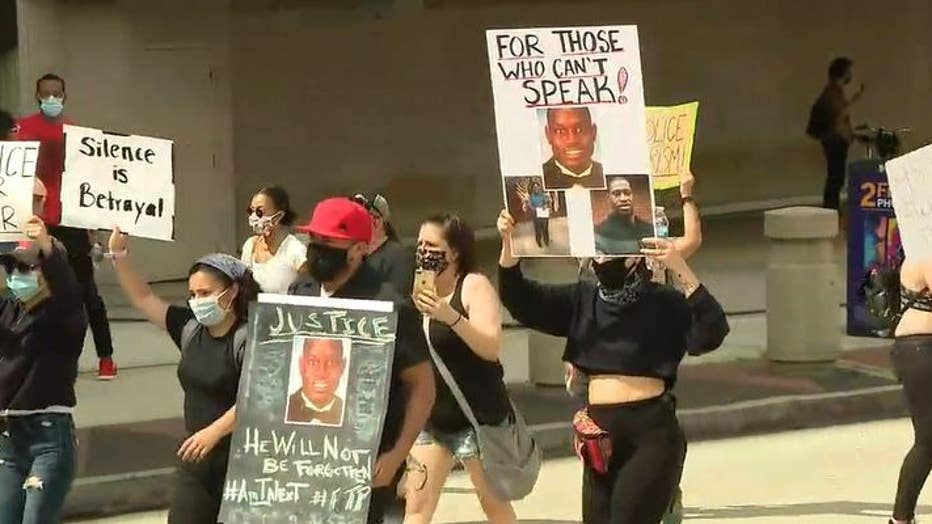 "This never should have happened," Shields said in the video. “I am aware there is a huge amount of hurt, anger, and fear over Mr. Floyd's murder; rightly so.”

Several other law enforcement organizations across the country have released statements condeming the officer's actions. Critics say their denunciations are empty words without meaningful reform behind them.