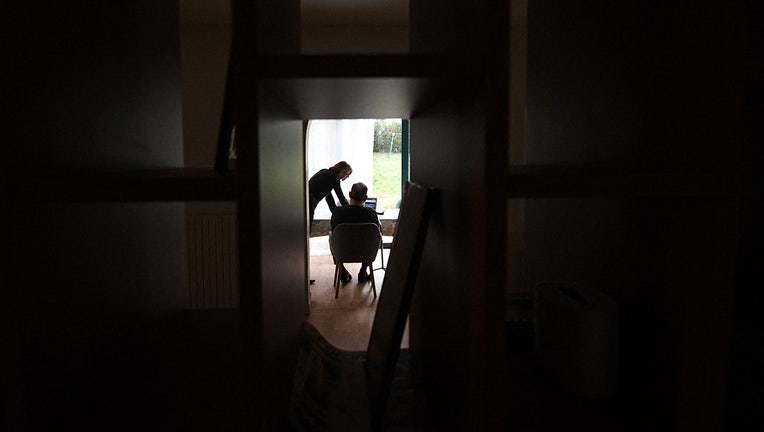 A carer speaks with an elderly resident - one of three alzheimer sufferers in the establishment- in a house on the outskirts of Paris on February 17, 2022. (Photo by ALAIN JOCARD/AFP via Getty Images)

Deaths among older Alzheimer's patients surged 26% during the first year of the COVID-19 pandemic, according to New Hampshire and Massachusetts researchers.

In addition, deaths for Medicare enrollees without the disease increased by more than 12% in 2020.

"Thus, patients with ADRD experienced a 13.3% greater mortality risk than patients without ADRD from March through December 2020," the authors wrote.

In nursing homes, the deaths of patients with Alzheimer's and related dementia (ADRD) increased by 33%, compared with 24% among those residents without Alzheimer's.

Among the Asian, Black, and Hispanic populations, deaths accelerated even faster than the overall ADRD population and a "similar pattern of elevated mortality risk was observed" among enrollees without ADRD.

These results were even applicable among Alzheimer's patients in areas with low COVID-19 prevalence.

VIAGARA MAY BE PROMISING DRUG CANDIDATE IN TREATMENT OF ALZHEIMER'S DISEASE, STUDY FINDS

The study examined all causes of death, using data from the Centers for Medicare and Medicaid Services, and the authors said it represents the "largest examination" of mortality trends among nursing home residents during the early phase of the pandemic.

Because changes in health care delivery might disproportionately impact older adults with ADRD, the authors wrote that it is "not difficult to imagine how the combination of less effective (or absent) outpatient care and lower inpatient admission rates led to higher mortality."

As telehealth takes on a "larger role" in the delivery of health care, the study said it would be important to monitor the outcomes of older adults.

In addition, increases in caregiver stress, burden and isolation "may have indirectly affected the health of people with ADRD and people living in nursing home settings," they noted.

Limitations to the study include that nursing home patients may have been in alternative institutional settings who were not captured, that COVID-19 infection rates were likely understated line early 2020, changes in case mix may have occurred and that pandemic waves did not follow a uniform timeline and that they were unable to determine why some examined hospital referral regions (HRRs) fared better than others.