How did a steer get onto the freeway?

A steer led animal services and California Highway Patrol on a chase from the freeway, to a parking lot and into a yard Wednesday afternoon. Susan Hirasuna set out to find out how the steer got loose.

LOS ANGELES - A steer is safe in a pen after leading authorities on a chase along the freeway, through a parking lot, and into a local yard Wednesday afternoon.

The steer made its way onto the 210 Freeway in the Lake View Terrace area shortly after noon Wednesday. SkyFOX was live over the scene as Animal Control and California Highway Patrol worked to corral the animal to safety.

A steer made its way onto the 210 Freeway Wednesday afternoon in the Lakeview Terrace area. Animal control and California Highway Patrol worked to corral the cow off the highway

After a trot on the freeway, at least five vehicles helped corral the animal down an off ramp, then eventually under a bridge and into a nearby parking lot. One official was seen with what looked like a lasso or some sort of rope as authorities tried to apprehend the animal.

After several minutes cornered in the parking lot, the steer was able to escape, climbing up a set of stairs and back onto the road. 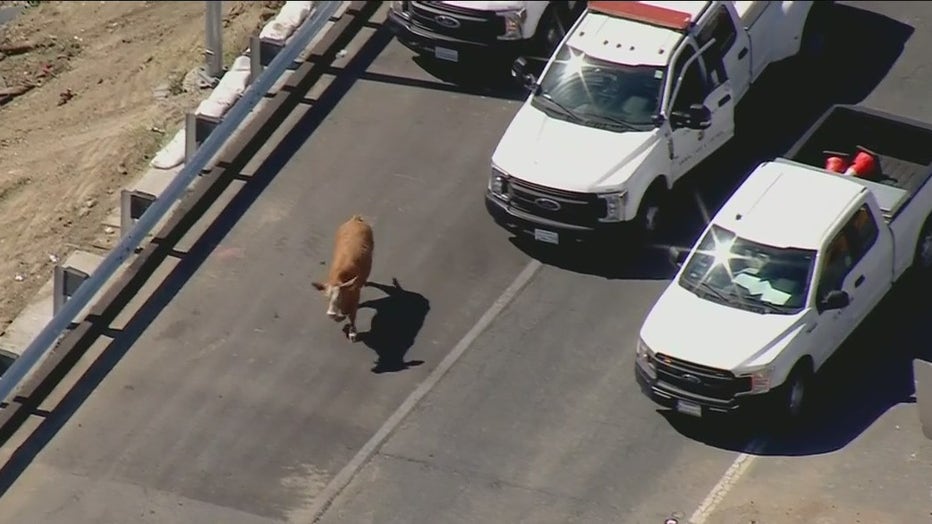 Rafael Ortega and his brother Daniel Ortega were two of the men who ended up roping the animal after it made its way into a nearby lawn. They came from their nearby feed lot to help. Rafael called it, "a hell of a time." Questions still remain about how exactly the steer got loose. Rafael says he believes a truck driver broke down on the freeway, and someone opened the latch of the door. Authorities haven't confirmed if that's what happened, however.

Rafael says though that, "the steer is in good hands" Wednesday night.