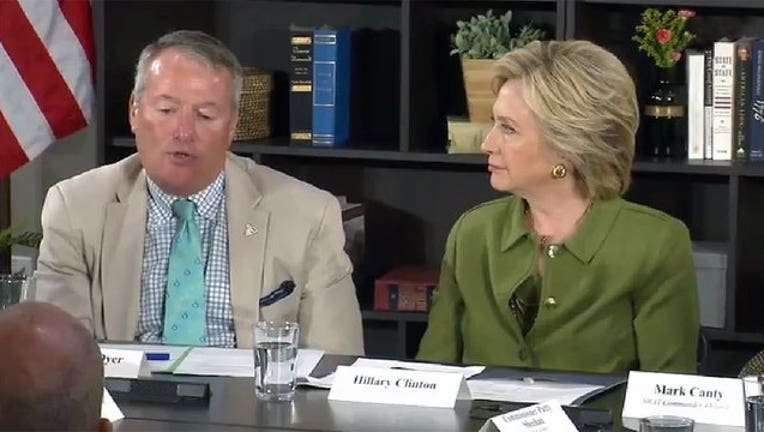 ORLANDO, Fla. (AP) - Hillary Clinton moved closer to introducing her running mate Friday, seeking to snatch attention from newly crowned Republican nominee Donald Trump just hours after he closed out his convention with a fiery and foreboding turn at the podium.

Clinton opens a two-day campaign swing Friday in Florida and is expected to introduce her running mate either at a Friday afternoon rally at the state fairgrounds in Tampa or on Saturday at Florida International University in Miami.

Before visiting Tampa and Miami, she made a stop in Orlando for a somber meeting with community leaders and family members affected by the Pulse nightclub shooting in Orlando. WATCH VIDEO ON OUR FACEBOOK PAGE.  Clinton made no mention of her impending pick  She later visited the site of the rampage that killed 49 people, placing a bouquet of white flowers at the site next to a candle and a framed picture of a cross.

Clinton said gay, lesbian, bisexual and transgender people are more likely to be victims of a hate crime than other people. "It is still dangerous to be LGBT in America," she said. "We have to stand against hate and bigotry."

After the event, Clinton tweeted that she was "monitoring the horrific situation in Munich." Police in the German city warned people to stay indoors and avoid public places Friday as they hunted for the shooter or shooters who opened fire at a shopping mall, killing six people and wounding others.

"We stand with our friends in Germany as they work to bring those responsible to justice," she wrote.

Crews were still sweeping confetti from the GOP convention floor as the Clinton campaign signaled an announcement was coming soon. In a tweet Friday morning, her team urged supporters to text the campaign to get first word. Virginia Sen. Tim Kaine was the leading contender, according to a pair of Democrats familiar with Clinton's search.

Trump, in his first comments after the cheers of his Thursday night event, made clear he isn't yet ready to give up the spotlight.

"Hillary is trying to pick her next vice president as fast as possible, because she wants to take away a little of the success that we had at this convention," Trump told supporters at his convention hotel.

But rather that stay focused on Clinton or reach out to the general election voters he now must court, Trump spent considerable time stoking the fire of his bitter quarrel with Republican former rival Ted Cruz.

The Texas senator refused to endorse Trump in a Wednesday night speech, drawing boos from the convention crowd. No matter, Trump said Friday: he didn't want that support anyway.

"He'll come and endorse, it's because he has no choice," said Trump, who wondered aloud if he could create a super PAC as president to target Cruz. "But I don't want his endorsement. What difference does it make?"

Trump also boasted of his TV ratings, his primary victories and other achievements, including winning over his wife, Melania, in a stream-of-consciousness delivery with his vice presidential nominee, Indiana Gov. Mike Pence, standing quietly nearby.

"I don't do anything unless I win," Trump insisted. He promised to work "so hard" and vowed his campaign was "not going to disappear," even though he has no plans to campaign this weekend and no events on his schedule for next week.

In an 75-minute speech Thursday night, Trump made forceful promises to be the champion of disaffected Americans, capping his convention on a high note for the party, not a moment too soon after shows of disharmony and assorted flubs before the four-day closer.

Speaking to "the forgotten men and women of our country," the people who "work hard but no longer have a voice," he declared: "I am your voice." With that, he summed up both the paradox and the power of his campaign — a billionaire who made common cause with struggling Americans alienated from the system, or at least a portion of them.

The speech was strikingly dark for a celebratory event and almost entirely lacking in policy details. Trump pledged as president to restore a sense of public safety, strictly curb immigration and save the nation from Clinton's record of "death, destruction, terrorism and weakness."

"I have joined the political arena so that the powerful can no longer beat up on people that cannot defend themselves," Trump said. He shouted throughout as he read off a teleprompter, showing few flashes of humor or even smiles.

President Barack Obama said Friday the picture Trump painted of the nation "doesn't really jive with the experience with most people."

At a White House news conference with Mexican President Enrique Pena Nieto, Obama said crime rates, especially those for violent crime, are lower than at any time in the past 30 years. He noted violent crime has recently risen in some cities, "but we're not going to make good decisions based on fears that don't have a basis in fact."

Kaine, 58, appeared to be the favorite for her choice, according to two Democrats, who both cautioned that Clinton has not made a decision and could change direction.

In Cleveland, Trump's acceptance of the Republican nomination capped his improbable takeover of the GOP, a party that plunges into the general election united in opposition to Clinton but still torn over Trump. Underscoring his unorthodox candidacy, Trump reasserted the hard-line immigration policies that fired up conservatives in the primary but broke with many in his party by expressing support for gays and lesbians.

It was an altogether smoother — and more scripted — chapter in a footloose convention shocked a night earlier by Cruz's prime-time speech, a pointed non-endorsement of the nominee by the Texas senator who finished second in the race and came to Cleveland harboring grievances — and future presidential ambitions.

During their convention, Republicans were relentless and often raw in demonizing Clinton. As fired-up supporters at Trump's acceptance speech broke out in their oft-used refrain of "Lock her up," the nominee waved them off, and instead declared, "Let's defeat her in November." Yet he also accused her of "terrible, terrible crimes."

"This is the legacy of Hillary Clinton: death, destruction, terrorism and weakness," he said. "But Hillary Clinton's legacy does not have to be America's legacy."

The Democratic convention in Philadelphia, which starts Monday, is expected to be a more orderly affair. Clinton is, if anything, disciplined.

Agriculture Secretary Tom Vilsack, a longtime friend of Hillary and Bill Clinton, is still in the mix for vice president, according to one of the two Democrats. Both are familiar with the selection process and spoke on the condition of anonymity because they were not authorized to discuss it publicly.

Kaine has been active in the Senate on foreign relations and military affairs and built a reputation for working with both parties as Virginia's governor and mayor of Richmond.

What political news is the world searching for on Google and talking about on Twitter? Find out via AP's Election Buzz interactive. http://elections.ap.org/buzz