There are two areas we are watching. One is in the Eastern Atlantic Ocean with a 30 percent chance for further development. Another storm that is closer to Florida is expected to become organized over the Caribbean Sea in the coming days.

ORLANDO, Fla. - The chances of a tropical wave in the Atlantic have increased as we approach the peak of hurricane season.

The National Hurricane Center is currently watching two tropical waves that have developed and are moving across the Atlantic. The first is a located to the west of the Cabo Verde Islands is producing a large area of disorganized showers and thunderstorms.

The chances of development have increased to 30-percent.

RELATED: Which state is most at risk for hurricane damage in a given season? Hint: It's not Florida 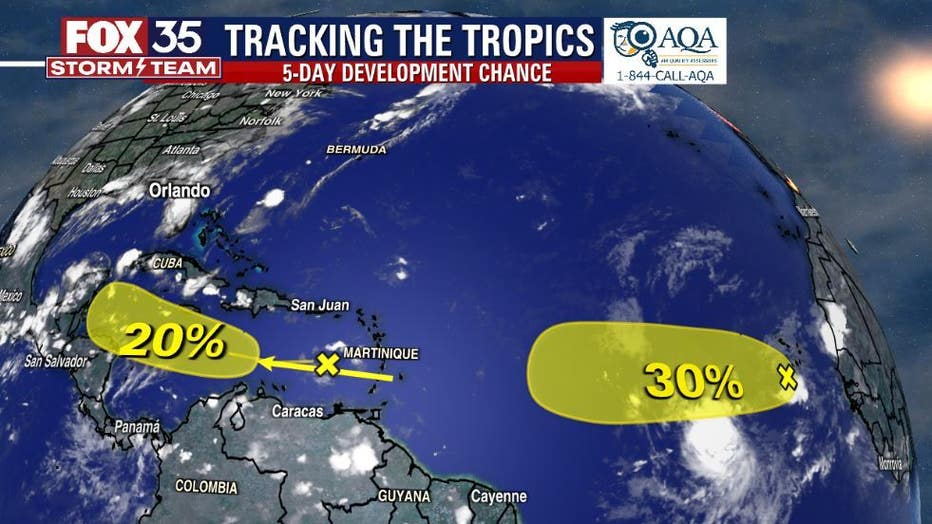 "Environmental conditions could support some gradual development of this system through early next week while it moves westward across the eastern and central tropical Atlantic at 10 to 15 mph," forecasters said.

A second wave is located over the eastern Caribbean Sea and is producing minimal shower and thunderstorm activity. This system is expected to move westward at about 15 mph during the next several days, and environmental conditions could become more conducive for slow development by early next week when it moves across the central and western Caribbean Sea. Chances of development remain low at 20-percent as of Friday morning.