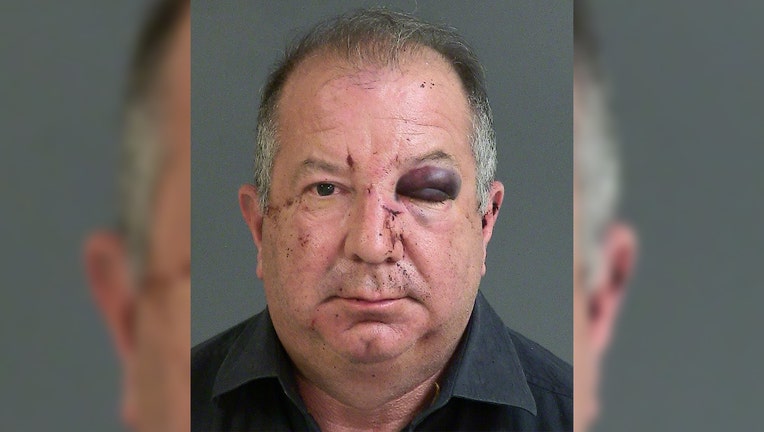 CHARLESTON, S.C. - A South Carolina man was punched and given a black eye after a witness allegedly saw him strangling his girlfriend at a bowling alley and intervened.

According to a police report obtained by FOX TV Stations, police responded to a call in reference to an assault at Ashley Lanes Tavern Bowling Ally in Charleston on March 19.

Witnesses told police that they observed a man, later identified as Pano Michael DuPree, allegedly entering the bowling alley and arguing with his girlfriend.

"The witnesses advised the offender started placing his arms around her neck from behind, trying to place her in a chokehold," the police report read.

RELATED: Man arrested after allegedly pulling down his mask at grocery store to kiss baby he didn’t know on lips

According to police, a bystander observed what was going on and punched DuPree, 58, in the face, knocking him to the ground.

Charleston police arrived on the scene and spoke to the victim, who said the offender started arguing with her and then placed his arms around her neck and pulled her hair.

"After the offender was punched in the face he fell to the ground while still holding the victim’s hair, pulling a large number of hairs from her head," the report stated.

The victim told police that Dupree is her boyfriend, but they do not live together or have children together. Emergency medical services responded and transported DuPree to Roper St. Francis Healthcare for evaluation.

Based on information from witnesses and the victim, DuPree was placed under arrest for one charge of assault and battery in the 3rd degree. Dupree was released on a $1,087 bond and his next court date is set for May 5.

According to local newspaper The Post and Courier, this isn’t the first time DuPree, who is a lawyer, has been arrested in violent incidents.

In 2012, DuPree was temporarily suspended from practicing law while officials investigated allegations that he punched and bit a Utah state trooper during a traffic stop. He was arrested and charged with two counts of assault on a police officer, resisting arrest, disorderly conduct and public intoxication.

In October 2003, Charleston police arrested DuPree on resisting arrest and disorderly conduct charges after he was accused of struggling with police officers who tried to arrest him at a hotel after they responded to a report of a fight.

The charges were later dismissed after DuPree completed a 30-day period with no further arrests, The Post and Courier reported.

Editor's note: A police report indicated that a woman punched the suspect who was allegedly seen strangling his girlfriend, but Charleston police have since clarified that the bystander who intervened was a man.