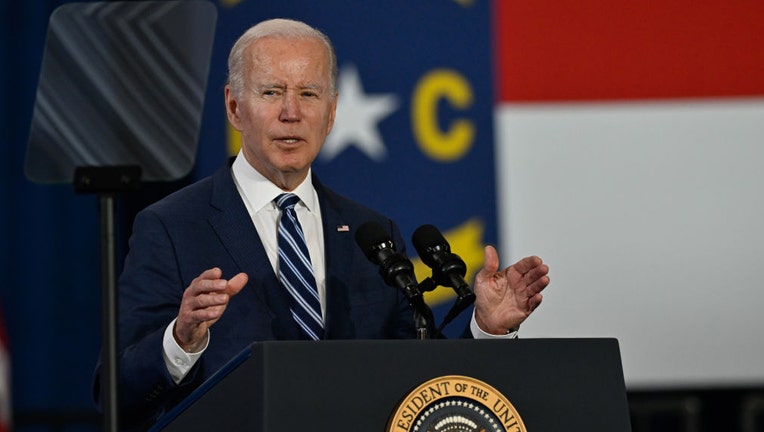 WASHINGTON - The Biden administration is taking a key step toward ensuring that federal dollars will support U.S. manufacturing — issuing requirements for how projects funded by the $1 trillion bipartisan infrastructure package source their construction material.

New guidance issued Monday requires that the material purchased — whether it's for a bridge, a highway, a water pipe or broadband internet — be produced in the U.S. However, the rules also set up a process to waive those requirements in case there are not enough domestic producers or the material costs too much, with the goal of issuing fewer waivers over time as U.S. manufacturing capacity increases.

"There are going to be additional opportunities for good jobs in the manufacturing sector," said Celeste Drake, director of Made in America at the White House Office of Management and Budget.

President Joe Biden hopes to create more jobs, ease supply chain strains and reduce the reliance on China and other nations with interests that diverge from America's. With inflation at a 40-year high ahead of the 2022 midterm elections, he's betting that more domestic production will ultimately reduce price pressures to blunt Republican attacks that his $1.9 trillion coronavirus relief package initially triggered higher prices.

"From Day One, every action I’ve taken to rebuild our economy has been guided by one principle: Made in America," Biden said Thursday in Greensboro, North Carolina. "It takes a federal government that doesn’t just give lip service to buying American but actually takes action."

Biden said that the roughly $700 billion the government devotes annually to procuring goods is supposed to prioritize U.S. suppliers but regulations going back to the 1930s have either been watered down or applied in ways that masked the use of foreign imports.

The administration could not say what percentage of construction material for existing infrastructure projects is U.S.-made, even though the federal government is already spending $350 billion on construction this year. The new guidelines would enable government officials to know how many dollars go to U.S. workers and factories.

Tucked into the bipartisan infrastructure package that became law last November was a requirement that starting on May 14 "none of the funds" allocated to federal agencies for projects may be spent "unless all of the iron, steel, manufactured products, and construction materials used in the project are produced in the United States." That's according to Monday's 17-page guidance.

The guidance includes three standards for these requirements to be waived: if the purchase "would be inconsistent with the public interest"; if the needed materials aren't produced "in sufficient and reasonably available quantities or of a satisfactory quality"; or if U.S. materials increase a project's cost by more than 25%.

American manufacturers are about 170,000 jobs short of the 12.8 million factory jobs held in 2019, as manufacturing jobs began to decline before the pandemic began. But the U.S. has 6.9 million fewer manufacturing jobs compared with the 1979 peak, a loss caused by outsourcing and automation.

Getting more industrial jobs will likely mean adding more factories and assembly lines — as manufacturers are operating at a 78.7% capacity, which the Federal Reserve notes is above the historical average.