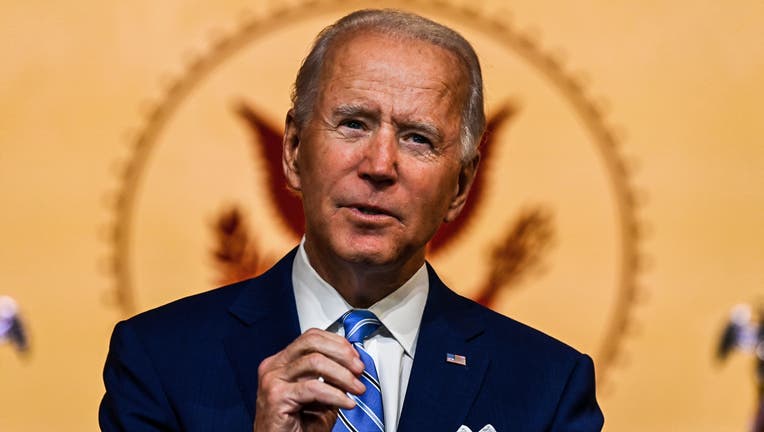 US President-elect Joe Biden delivers a Thanksgiving address at the Queen Theatre in Wilmington, Delaware, on November 25, 2020. - Biden called for an end to the "grim season of division" in the holiday speech . "I believe that this grim season of di

President-elect Joe Biden called on Americans to make a sacrifice this Thanksgiving by foregoing large gatherings and noted that his own family is giving up their tradition to comply with coronavirus guidelines.

Biden said his large family typically gathers in Nantucket on the holiday, but instead, this year he and wife Jill Biden would have a “small group” around their dinner table in Delaware.

“I know this isn't the way many of us hoped we'd spend our holiday. We know that a small act of staying home is a gift to our fellow Americans,” the president-elect wrote in a clip posted to Twitter.

“It's a personal sacrifice that each of our families can make and should make to save somebody else's life. But it's also a shared sacrifice for the whole country,” he continued.

MORE NEWS: What is President Trump doing on Thanksgiving?

“I know better days are coming. I know how bright our future is. I know the 21st century is going to be an American century.”

Jill Biden then thanked front-line workers and acknowledged those who had lost loved ones to COVID-19.

“We're thankful for the millions of Americans who have been working on the frontlines throughout this pandemic. Those who care for our sick, who help put food on our tables, who teach our children, who put on a uniform to serve our nation and the families who love them as well. We're thankful for everyone who met this moment with kindness, bringing groceries to neighbors or asking 'how can I help?' For every small business owner who put their employees and their communities before themselves.”

“So many people are celebrating this year knowing that someone they love will never again take their seat at the table. Joe and I know the pain of that empty chair. If you are one of those families, please know that our hearts are with you and that you know that you aren't alone,” she continued.

Health experts and lawmakers across the country have urged Americans not to travel over the holiday, and a number have banned gatherings larger than 10. The Centers for Disease Control and Prevention last week released guidelines recommending against travel.

On Thursday morning, Jill and Joe Biden penned an op-ed for CNN. “This year, our turkey will be smaller and the clatter of cooking a little quieter. There will be no family walks in the cold or playful bickering amongst the grandkids. Like millions of Americans, we are temporarily letting go of the traditions we can't do safely,” they wrote.

Meanwhile, for the first time since he took office, President Trump did not spend Thanksgiving at his Mar-a-Lago resort in Florida.

Although the president was initially scheduled to travel to Palm Beach for the holiday, Stephanie Grisham, spokeswoman for first lady Melania Trump, tweeted last week that the Trumps had chosen to remain at the White House instead.

During his annual proclamation on Wednesday, Trump also thanked those who had to remain apart from their families, pointing to servicemembers overseas.

"During this season of gratitude, we also acknowledge those who cannot be with their families. This includes the brave American patriots of our Armed Forces who selflessly defend our sacred liberty at home and abroad," he said.

MORE NEWS: Don’t want to cook? These restaurants are open on Thanksgiving Day

He continued: "And we pause to remember the sacrifices of our law enforcement personnel and first responders. We are deeply grateful for all those who remain on watch over the holidays and keep us safe as we celebrate and give thanks for the blessings in our lives."

Biden, too, gave an address Wednesday, focusing on the need for sacrifice as the virus surges.

“Our country’s in the middle of a dramatic spike in cases. We’re now averaging 160,000 new cases a day," the president-elect said, warning once again that Americans are facing “a long, hard, winter.”