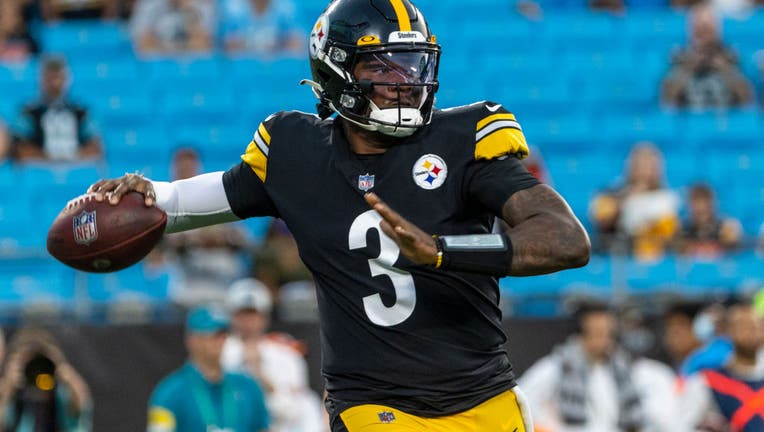 CHARLOTTE, NC - AUGUST 27: Dwayne Haskins #3 of the Pittsburgh Steelers looks to pass against the Carolina Panthers during the first half of an NFL preseason game at Bank of America Stadium on August 27, 2021 in Charlotte, North Carolina. (Photo by C

FORT LAUDERDALE, Fla. - Pittsburgh Steelers quarterback Dwayne Haskins was legally drunk and had taken drugs before he was fatally struck by a dump truck while walking on a Florida interstate highway last month, an autopsy report released Monday concluded.

The Broward County Medical Examiner’s Office said Haskins’ blood alcohol content was 0.20 when he was fatally struck on Interstate 595 near Fort Lauderdale-Hollywood International Airport just before dawn on April 9. That’s 2.5 times the 0.08 legal limit for driving in the state.

According to the University of California, Davis, and other universities, someone of Haskins’ weight, 230 pounds (104 kilograms), would have needed at least 10 drinks in the hours before his death to reach that level. He also had the strong painkiller ketamine and its metabolite norketamine in his system. The drug can be prescribed by a doctor, but can also be abused recreationally. The report does not say why the former Ohio State University star had it in his system.

The report said investigators found Haskins’ car out of gas near where he was hit. A woman he was with told investigators Haskins, 24, had gone to get fuel. Witnesses said he was trying to wave down cars and standing in the center lane when he was hit by the truck and then an SUV. The report said he died of blunt force trauma. No charges have been filed.

The Steelers told investigators that Haskins had no mental health issues and had never made any suicidal threats. They said he sometimes drank heavily and sometimes used marijuana, but was not known to use any other recreational drugs. The medical examiner ruled the death an accident.

Haskins had been in South Florida training with some of his Steelers teammates. The report said Haskins had gone to dinner with teammates and then to a club with a friend or cousin, possibly in Miami. The two got into an argument and separated.

Haskins had been on the phone with his wife, Kalabrya, back in Pittsburgh shortly before he was struck, telling her he had run out of gas. She told a 911 dispatcher she was worried when he didn’t call back and wasn’t answering her calls. She could be heard praying on the recording after the dispatcher put her on hold to find out if anything had been reported. The dispatcher then told her to stay by her phone and someone would contact her.

RELATED: Dwayne Haskins was stranded on Florida highway, getting gas when he was struck by a truck, 911 call reveals

Haskins starred at Ohio State in 2018, setting several school passing records and being named the MVP in both the Big Ten Championship game and in the Buckeyes’ Rose Bowl win over the Washington Huskies.

A 2019 first-round NFL draft pick by Washington, Haskins was released by the team after going 3-10 over two seasons. He was signed by Pittsburgh as a developmental QB, but he didn’t appear in a game last season.