NASA's plans for the moon and beyond

In mid-June, NASA plans to test the Space Launch System rocket and Orion spacecraft, running it through a countdown, including fueling the 32-story tall vehicle with 700,000 pounds of cryogenic fuel. The test is known as the wet dress rehearsal and was previously attempted several times in April, but after several hardware issues cropped up, the rocket was rolled back into the Vehicle Assembly Building for repairs.

The decision to move the rocket back to the hangar was made after a series of delays with wet dress rehearsal attempts that kept the vehicle out on the launchpad since mid-March, exposing it to the Florida elements.

NASA’s Artemis Mission Manager Mike Sarafin explained in April that the longer the rocket stays at the pad, the more stress is placed on the vehicle.

"It’s 32 stories tall. Every time the wind blows against it, it creates a bending movement, and over time, that adds up," Sarafin said. "We got to weigh that against environmental exposure out in the field, but then also the rollback to the Vehicle Assembly Building to reattach a wet dress rehearsal actually put stress on the vehicle as well." 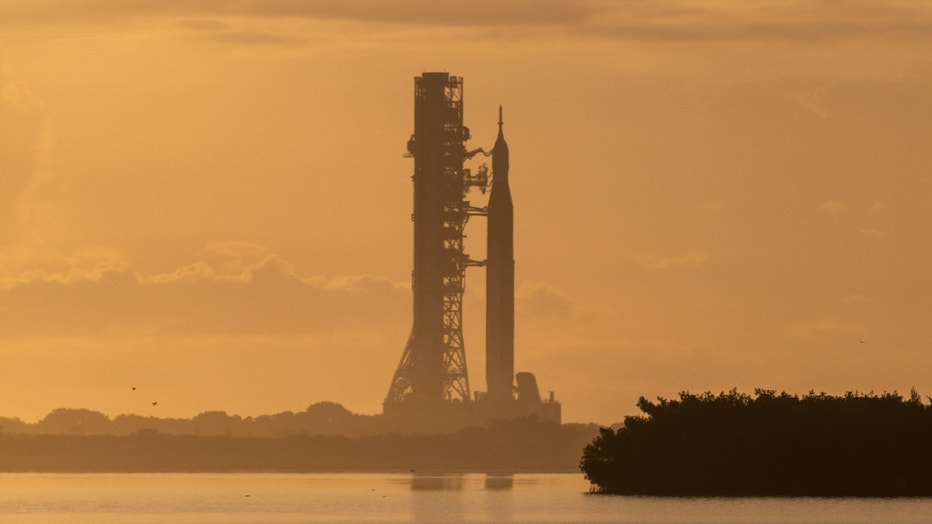 In the VAB, teams worked to resolve a liquid hydrogen leak and a faulty helium check valve.

Artemis-I will be the first test flight of the SLS and Orion without astronauts onboard. Orion will launch, fly around the moon and return to Earth. The first flight with crew, known as Artemis-II, will follow. These milestones are part of NASA's plan to return astronauts to the moon by 2025.

Teams at Kennedy Space Center now say the rocket is ready to repeat the test ahead of its maiden launch later this summer.

It took eight hours to roll the rocket and mobile launch tower four miles to its destination. The Artemis-1 vehicle arrived at launchpad 39B just after 8 a.m. Monday.

If the test goes smoothly this time, NASA could announce a launch date for Artemis-I.

The agency will look for Earth and moon alignment that would allow the SLS rocket to complete its trans-lunar injection burn and a period when Orion would not be in darkness for more than 90 minutes to continue providing sunlight to its solar wings. The launch date also needs to be favorable for Orion to splash down in the Pacific Ocean when it returns.

According to NASA, several launch windows this summer meet these criteria. From July 26 to Aug. 10 is the first available opportunity.