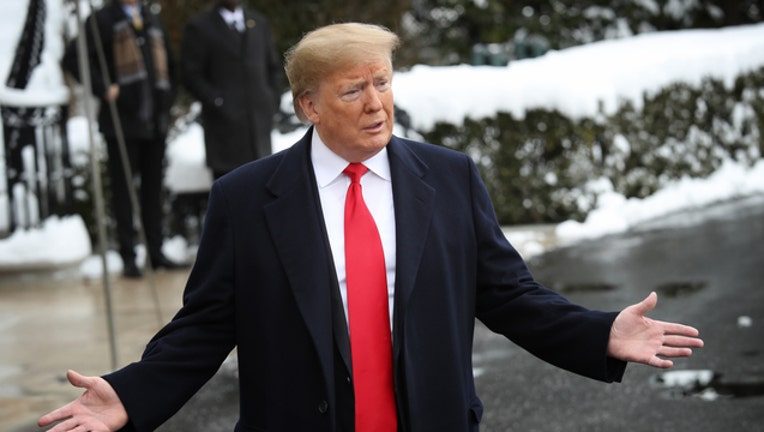 WASHINGTON (AP) -- President Donald Trump accused House Speaker Nancy Pelosi of partying on a beach in Puerto Rico - with lobbyists, no less - while he sat in the White House over the weekend ready to work out a deal to end the federal shutdown. It's not true.

Pelosi didn't go to Puerto Rico or any beach. Like Trump, she spent the weekend in snow-bound Washington.

In recent days, Trump and allies twisted a weekend retreat in San Juan attended by about 30 Democratic lawmakers into a "vacation" that seemingly emptied the capital of the legislators needed to solve the partial government shutdown.

In reality, many lawmakers from both parties were out of town, mostly back home, though talks could have taken place in their absence.

Trump misrepresented his own circumstances when he asserted "I haven't actually left the White House in months" except for a trip to Iraq. He said this a day after visiting Texas, and that was far from the only time he has been out of the house. Then on Monday he went to New Orleans to address farmers.

- "Nancy Pelosi's in Hawaii over the holidays, now she's in Puerto Rico with a bunch of Democrats and lobbyists, you know, enjoying the sun and partying down there." - Fox News interview Saturday night.

- "I'd rather see the Democrats come back from their vacation and act. ... I'm in the White House, and most of them are in different locations. They're watching a certain musical in a very nice location."- Fox News interview.

-"A lot of the Democrats were in Puerto Rico celebrating something. I don't know, maybe they're celebrating the shutdown." - comments Monday before leaving for New Orleans.

Far from "enjoying the sun" in Puerto Rico, Pelosi stayed in Washington, which got a big snowfall. She spent the weekend working at the Capitol, said Drew Hammill, her deputy chief of staff.

Most Democratic lawmakers were somewhere other than Puerto Rico. Most who went are members of the Congressional Hispanic Caucus. They attended the annual winter retreat of the caucus's political and fundraising arm.

Some attended "Hamilton" as the musical opened a two-week run in Puerto Rico expected to raise millions of dollars for artists and cultural groups struggling in the aftermath of Hurricane Maria. Referring to Democrats at the fundraising performance in his Fox News interview, Trump called it "frankly, ridiculous."

Trump is correct that Pelosi visited Hawaii over the Christmas holiday.