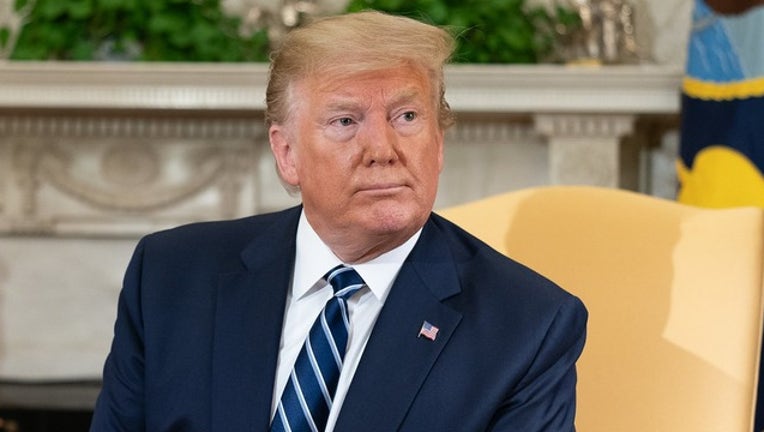 WASHINGTON (AP) - President Donald Trump said Saturday that military action against Iran was still an option for its downing of an unmanned U.S. military aircraft, but amid heightened tensions he dangled the prospect of eventually becoming an unlikely "best friend" of America's longtime Middle Eastern adversary.

Trump also said "we very much appreciate" that Iran's Revolutionary Guard chose not to target a U.S. spy plane carrying more than 30 people.

The president's softer tone Saturday marked a stark contrast to the anti-Iran rhetoric he employed throughout the presidential campaign and presidency, including his use of punishing economic sanctions in an attempt to pressure Iran to give up its quest to build nuclear weapons.

"The fact is we're not going to have Iran have a nuclear weapon," he said as he left the White House for a weekend at the Camp David presidential retreat. "And when they agree to that, they are going to have a wealthy country, they're going to be so happy and I'm going to be their best friend."

Another event earlier this week put a different cast on Trump's more optimistic rhetoric. U.S. military cyber forces launched a strike against Iranian military computer systems on Thursday in response to the loss of the military drone. U.S. officials told The Associated Press that the cyberattacks, which disabled Iranian computer systems that controlled its rocket and missile launchers, had been authorized by Trump.

On Saturday, days after he said it was "hard to believe" the shoot-down of the U.S. drone was intentional, Trump did an about-face and accused Iran of "knowingly" targeting the plane. And he reiterated that he aborted a planned military strike set for Thursday after learning approximately 150 Iranians would be killed.

RELATED: President Trump tweets US was 'cocked and loaded' to strike Iran

"Everybody was saying I'm a war monger. And now they say I'm a dove. And I think I'm neither, if you want to know the truth," Trump told reporters. "I'm a man with common sense. And that's what we need in this country, is common sense. But I didn't like the idea of them knowingly shooting down an unmanned drone and then we kill 150 people."

Trump's comments came as Iran summoned the United Arab Emirates' top envoy to Tehran to protest the neighboring Arab nation's decision to allow the U.S. to use one of its military bases to launch the drone that Iran says entered its airspace, state media reported Saturday.

RELATED: Amid Iran and trade, Trump proposes new look for Air Force One

Iran issued a "strong protest" to the UAE diplomat, saying Iran does not tolerate the facilitation of foreign forces that violate its territory, the report by the official IRNA news agency said.

The U.S. said its RQ-4A Global Hawk was shot down Thursday over international waters in the Strait of Hormuz, not inside Iranian airspace.

The two countries disputed the circumstances leading up to an Iranian surface-to-air missile bringing down the drone, an unmanned aircraft with a wingspan larger than a Boeing 737 jetliner and costing over $100 million.

British diplomat Andrew Murrison planned to visit Iran on Sunday to call for the "urgent de-escalation in the region and raise U.K. and international concerns about Iran's regional conduct" during talks with Tehran's government, Britain's Foreign Office said in a statement Saturday.

Trump said U.S. sanctions on Iran have turned the country into an "economic mess" and he tweeted later Saturday about new penalties to be imposed on Monday, without providing details. Treasury Secretary Steven Mnuchin said Friday that Iran's financial sector would be penalized soon if it doesn't work to stop evading international guidelines designed to combat money laundering.

The drone incident immediately heightened the crisis already gripping the wider region, which is rooted in Trump withdrawing the U.S. a year ago from Iran's 2015 nuclear deal and imposing crippling new sanctions on Tehran.

Recently, Iran quadrupled its production of low-enriched uranium to be on pace to break one of the deal's terms by next week, while threatening to raise enrichment closer to weapons-grade levels on July 7 if Europe doesn't offer it a new deal.

In Iraq, security measures were increased at one of the country's largest air bases, which houses American trainers, a top Iraqi air force commander said Saturday. The U.S. military said operations at the base were going on as usual and there were no plans to evacuate personnel.