The FBI late Saturday released a newly declassified document related to logistical support given to two of the Saudi hijackers in the run-up to the Sept. 11, 2001, terrorist attacks. The document details contacts the hijackers had with Saudi associates in the U.S. but does not provide proof that senior Saudi government officials were complicit in the plot.

WASHINGTON - The FBI released hundreds of pages of newly declassified documents Wednesday about its long effort to explore connections between the Saudi government and the Sept. 11 attacks, revealing the scope of a strenuous but ultimately fruitless investigation whose outcome many question to this day.

Agents for years investigated support given to several of the hijackers upon their arrival in the U.S., focusing in particular on whether three Saudi nationals — including a Saudi Embassy official in Washington — had advance knowledge of the attacks.

Ultimately, investigators found insufficient evidence to charge any of the three with illegally supporting the hijackers, according to an FBI memo from May that closed out the probe and was among the more than 700 pages released Wednesday. The FBI noted in the memo that al-Qaida compartmentalized the roles within its major attacks and "did not make the attack plans known in advance to others" for fear of word getting out.

"Specifically, in relation to the 9/11 attacks, the hijackers knew there was a martyrdom operation, but did not know about the nature of the operation until shortly before the attack for operational security reasons," the FBI memo states.

The documents were the latest materials to be released under an executive order from President Joe Biden aimed at making public long-classified investigative reports related to the attacks. A separate investigative document was released on the 20th anniversary of the attacks in September. The records have long been sought by victims' relatives as they sue in federal court in New York to try to prove that the Saudi government was complicit, something Riyadh officials have vigorously denied. 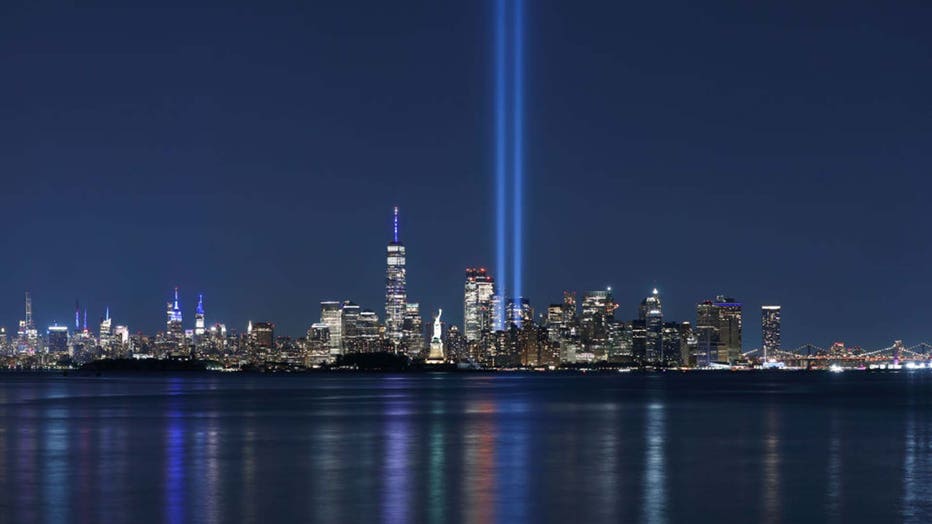 FILE - The annual Tribute in Light is illuminated behind the Statue of Liberty and next to One World Trade Center in New York City on the 20th anniversary of the 9/11 attacks on Sept. 11, 2021 as seen from Jersey City, New Jersey.

The Saudi Embassy in Washington did not respond to a request for comment Wednesday, but issued a statement in September calling any allegations of complicity malicious and categorically false.

U.S. government investigations over the past two decades have documented support given by Saudi government officials to several of the hijackers upon their arrival in the U.S., but have not produced clear evidence that senior government leaders helped plot the attacks. The FBI memo closing out the investigation says the bureau "has not identified additional groups or individuals responsible for the attack other than those currently charged."

Even so, the documents reveal new details about the years-long efforts by the FBI to hunt for possible involvement by the Saudi government and to scrutinize support given by Saudi nationals in the U.S. to the first two hijackers to arrive in the U.S., Nawaf al-Hazmi and Khalid al-Mihdhar.

Andrew Maloney, a lead lawyer for the victims' families, said the FBI has "now released a substantial amount of very incriminating documents regarding the Saudi government's role in helping al-Qaida and these two hijackers in particular."

Brett Eagleson, whose father, Bruce, died in the World Trade Center attack, said in a statement that the details in the documents "help bolster the arguments that high-level Saudi officials aided and supported the 9/11 hijackers."

Among the episodes scrutinized by the FBI and recounted in the records is a February 2000 encounter at a Southern California halal restaurant between al-Hazmi and al-Mihdhar and a Saudi national named Omar al-Bayoumi, who subsequently helped them lease an apartment in San Diego. He had previously drawn FBI scrutiny but was never charged over his connections with the future hijackers.

According to the records released Wednesday, the FBI also investigated ties between al-Hazmi and al-Mihdhar and people linked to the Saudi Ministry of Islamic Affairs, which funds mosques and efforts to promote Islam around the world.

According to one of the documents, the FBI studied whether al-Qaida operatives had "infiltrated" the ministry unbeknownst to the Saudi government or whether there was a "collaboration of AQ operatives and certain radical elements within the Ministry of Islamic Affairs for mutually beneficial goals."

The FBI examined whether Saudis who had given financial support to al-Hazmi and al-Mihdhar had ties to the plotters of the attack.

According to the documents, al-Bayoumi was in contact with Musaed al-Jarrah, who served as director of Islamic affairs at the Saudi Embassy in Washington and who the FBI suspected "may have been trying" to bring extremists into the U.S. using his embassy position. In its final summary of the investigation, the FBI described al-Jarrah as a "controlling, guiding, and directing influence on all aspects of Sunni extremist activity in Southern California."

Maloney, the plaintiffs' lawyer, said those allegations are significant.

"Here we now have for the first time the FBI telling the world that Jarrah was an extremist, and he was bringing in Sunni extremist imams into the United States and then supervising them," he said.

But authorities had insufficient evidence that al-Jarrah, al-Bayoumi and a third man — Fahad al-Thumairy, who was an accredited diplomat at the Saudi Consulate in Los Angeles and who investigators say led an extremist faction at his mosque — had conspired to assist the hijackers.

None of the three was charged, and all have since left the country, the FBI said.

The Trump administration fought to keep al-Jarrah’s identity private before the Justice Department accidentally released it last year in a court filing.

In a Sept. 8, 2021, memo, the FBI corrected a previous assertion it made and said there was no evidence to prove that al-Jarrah had any personal contact directly with the two hijackers who were the focus of the investigation.

The documents also show investigators repeatedly re-interviewed Mohdar Abdullah, a Yemeni student who befriended al-Hazmi and al-Mihdhar when they settled in San Diego. He was arrested after the attacks as a suspected material witness, an allegation he has denied. After nearly three years in custody, he was deported to Yemen in 2004.

Abdullah has told investigators that he believed Saudi officials may have been complicit in the Sept. 11 plot by helping the hijackers settle in Southern California. But he could not provide agents with evidence.

"When questioned why he believes that, Abdullah stated that is his opinion and he doesn’t know anything more than what he provided to the FBI in the past," the documents say.