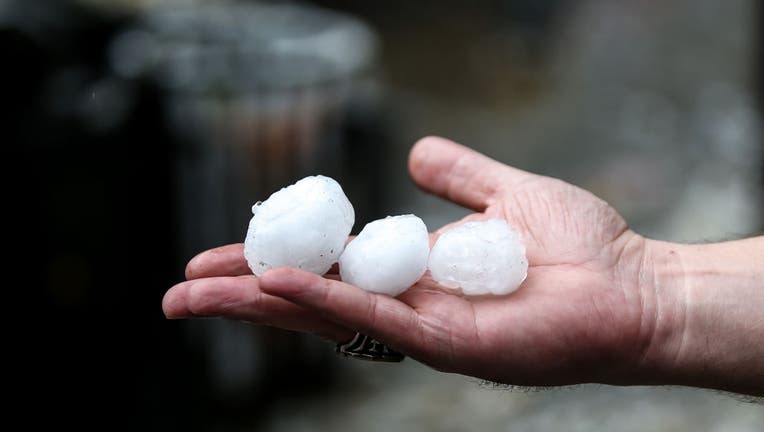 A man holds hailstones after heavy rain and hail fall.

It’s the one frozen precipitation that can occur in the middle of a summer heatwave: Hail.

Here’s a list of seven facts you may not know about those pellets of ice:

1. They’re a hallmark of strong thunderstorms

Hail requires strong updrafts commonly found in the middle of thunderstorm clouds to form. Those upward winds continuously blow raindrops to the frozen upper reaches of a thunderstorm, where it will turn into a hailstone.

It will then begin to fall, collecting new raindrops on the way down until it reencounters those updrafts, and it’ll blow skyward, freezing this newly acquired water into another layer of ice.

2. Their eventual size depends on how long they can defeat gravity

The process will repeat, and the hailstone will continue to grow in size until it is heavier than the updraft can support, then it will fall to the ground.

3. The stronger the winds, the larger the hail will become

According to the National Weather Service, upward wind speeds of 64 mph will support a hailstone as large as a golf ball, while a grapefruit-sized stone needs a 98-mph updraft.

4. The bigger they are, the harder they fall

Golf ball- to softball-sized hail can fall at speeds ranging from 44 to 72 mph, according to the National Weather Service, while larger stones can reach 100 mph.

5. The largest hailstone was the size of a volleyball

The largest hailstone recorded in the U.S. was 8 inches in diameter and 18.62 inches in circumference, found in Vivian, South Dakota, in 2010. It weighed nearly 2 pounds.

For comparison, a volleyball is also about 8 inches in diameter.

As you might imagine, getting pelted with millions of ice balls ranging in size from golf balls to grapefruits can cause some damage. From pummeling crops to blistering siding of homes…

And shattering windows, to leaving its mark (several times over) on vehicles that were outside.

All told, large hail causes an average of $1 billion in damage to property and crops in the U.S. each year.

7. Oklahoma is the large hail champion in the United States.