WASHINGTON - Five fetuses were found in a D.C. home after a tip led to the shocking discovery, according to authorities.

D.C. police said the fetuses were discovered on Wednesday in a home located in the 400 block of 6th Street SE, just blocks away from Capitol Hill.

Officers were called to the scene to investigate a tip about "potential bio-hazard materials" at the house, according to officials. The five fetuses were collected by the D.C. Chief Medical Examiner's Office as detectives continue their investigation.

Fox 5's David Kaplan has the latest details on the investigation into five fetuses found inside a home in Southeast D.C.

In a statement posted on social media, the group Progressive Anti-abortion Uprising claims that one of their members called in a tip to MPD about the fetuses because the group believed they were late-term abortions. The group also said they held a funeral mass and naming ceremony for the aborted fetuses.

MPD officials have not responded to the claims about the tip, but they did determine Wednesday that the fetuses were aborted in accordance with D.C. law.

The group claims that the fetuses are connected to a D.C. clinic they're charged with invading, but authorities have not confirmed that information, and they are still investigating where the fetuses came from.

There have been no arrests in connection with the discovery of the fetuses.

MPD confirms the discovery of the fetuses happened on the same day that investigators were at the house arresting an anti-abortion activist, Lauren Handy, as part of a federal indictment that claims Handy and eight others tried to block patients from entering an abortion clinic in D.C. on October 22, 2020. 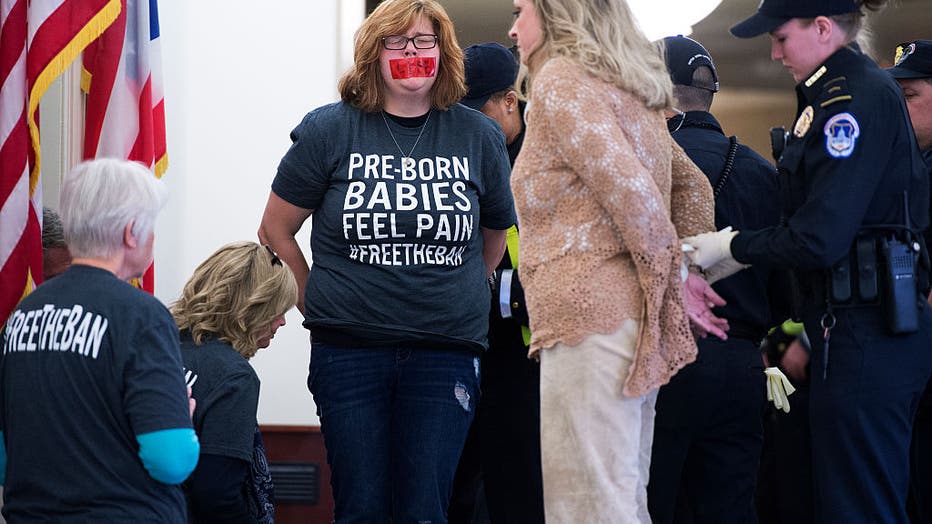 Picture above: Capitol Police arrest Lauren Handy, third from left, on March 25, 2015 for an abortion protest inside the Capitol. (Photo By Tom Williams/CQ Roll Call)

The indictment also claims the group tried to threaten and intimidate both patients and employees of the clinic.

The indictment charged these people:

The indictment alleges that on the day of the incident, Lauren Handy showed up to the clinic pretending to be a patient in need of reproductive health services. Once the clinic opened, Handy along with the 8 others named in the indictment, charged inside the clinic and blocked off two doors inside the waiting room. The indictment says Handy directed the group on what to do during the blockade.

The document also claims that the incident was live-streamed on Jonathan Darnel's Facebook page.

After the arrest, the Progressive Anti-abortion Uprising said on Instagram that Handy is the group's director of activism. The group confirms that Handy was arrested Wednesday by the FBI, and has since been released.

Fox 5's David Kaplan reached out to Handy about the case, but she said she cannot publicly comment right now.

The Progressive Anti-abortion Uprising says it will hold a news conference Tuesday morning to offer more information on the case.

This is a developing story. Stay with FOX 5 for updates.