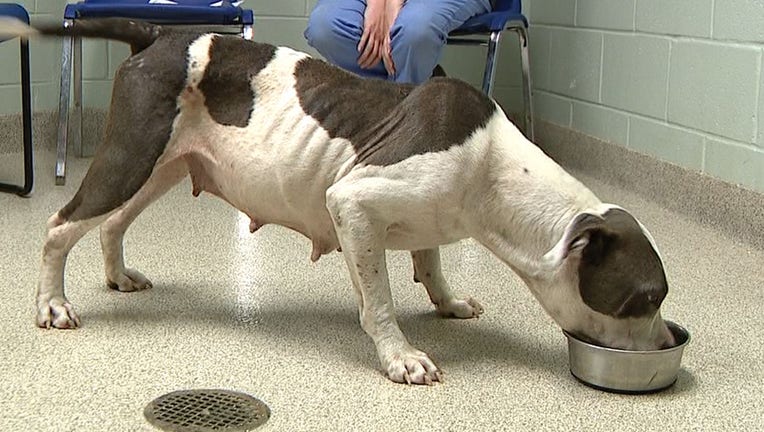 LAKE COUNTY, Fla. - Five dogs were found in appalling conditions at a Lake County home, as they were stuffed in small cages and denied food and water.

According to the Lake County Sheriff's Office, a deputy responded to a home on Highland Park Boulevard on Thursday in reference to a possible animal cruelty case. A UPS driver had contacted law enforcement after observing pit bulls in the front yard of the home.

Upon arrival, they said that two kennels containing three pit bulls in appalling conditions were found out front. One small kennel contained two female pit bulls. The kennel was so small that the animals could not move as they were in constant contact with each other. Another responding deputy said that the dogs were sitting on top of each with no room to move around. In the other kennel was just one female pit bull. None of the animals had access to food or water, as their bowls were yards away. The temperature had also reached the 90s and they were panting heavily.

The responding deputy said that another two pit bulls were located in makeshift kennels in the backyard. One of the pit bulls was very emaciated while the other was bloated and thought to anemic due to its white gums and a possible parasitic issue. There was also a lot of flea larvae, flea dirt, and dried blood across the pit bull's back. These pit bulls had no access to food or water as well.

The five dogs were reportedly removed from the home and taken to the Lake County Animal Shelter for treatment. Contact was made with the property owner, who told deputies that the property occupant does not care for his animals and that they were not being treated properly. The property occupant, Donald Barnes, stated that he was upset that his animals were removed. He made several excuses regarding the inadequate living conditions of the animals.

Deputies went on to speak to people near the home, who reportedly stated that Barnes would use the pit bulls to breed because the bully type of dogs are worth a lot of money. It was also stated that the dogs were constantly in cages.

The Lake County Sheriff's Office report advises that Barnes no longer be allowed to own any animals in the future.