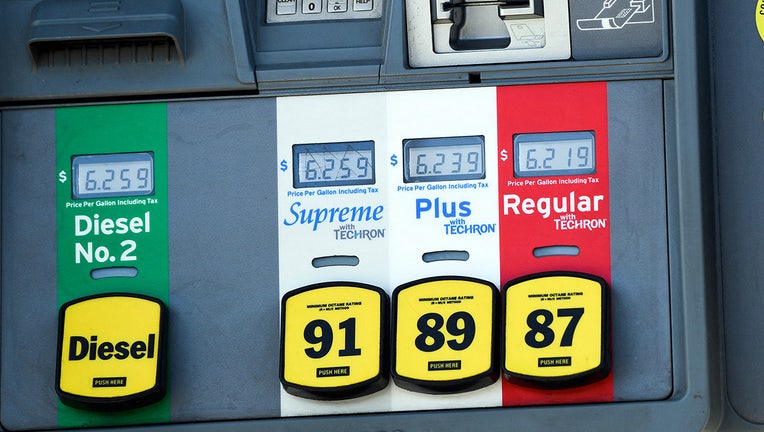 Gasoline and diesel fuel prices above six dollars a gallon are displayed on a pump at a Chevron gas station in downtown Los Angeles, California, on February 17, 2022. (Photo by PATRICK T. FALLON/AFP via Getty Images)

Prices at gas pumps across the nation are projected to rise between 20 and 30 cents for motorists, or more, driven by surging crude oil prices after Russia invaded Ukraine.

Brent crude jumped to more than $100 a barrel Thursday for the first time since 2014. It got as high as $105, before paring gains, according to Reuters.

Although there hasn't been a disruption in supplies yet, "buyers are shying away from purchasing Russian crude oil," Andy Liptow, president of Lipow Oil Associates, LLC. said in a note to FOX Business. "They are concerned that either the oil or the tanker that the oil is loaded on might end up entangled in financial sanctions," he added.

For U.S. motorists, this means the national average price of a gallon gasoline and diesel, which are sitting at $3.54 and $3.96 respectively, could rise another "20 to 30 cents on each," according to Liptow. This would push prices to around $3.85 per gallon for gasoline and $4.25 for diesel, Liptow projected.

In California, gasoline prices, which have already hit a record-high of $4.77, could be "headed toward a statewide average of $5," Liptow added. Currently, the price of diesel has already surpassed that, sitting at $5.04 a gallon.

The U.S. expanded sanctions against Russia late Thursday, yet President Biden did not include the energy industry.

"On our sanctions package, we specifically designed to allow energy payments to continue. We are closely monitoring energy supplies for any disruption. We've been coordinating with major oil producing and consuming countries toward our common interest to secure global energy supplies," Biden explained.

Currently, the U.S. and Iran have not come to an agreement on a new nuclear deal, which is keeping at least 1.3 million barrels per day of Iranian oil off the market, according to Liptow.

If this oil were to be released into the global market, it would help drive oil prices down. Liptow previously predicted that the oil market would fall by $3 to $5 a barrel if any deal was greenlighted.